The Strangers: Prey At Night trailer 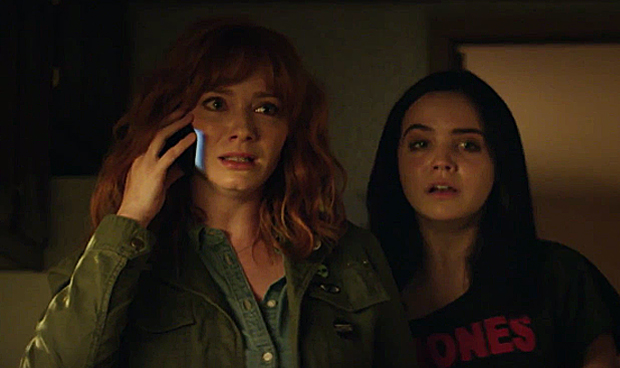 Horror sequel The Strangers: Prey At Night stars Christina Hendricks as a woman whose family is terrorised by masked misfits.

The Strangers arrived in 2008 as an insular, tonally-terrifying, horror film outing, centering on a young couple (Liv Tyler and Scott Speedman,) who are stalked in her remotely-located childhood summer home by three masked assailants. While it divided audiences, the film’s back-to-basics plot on a microscopic $9 million budget proved to be a successful formula, grossing $82.39 million worldwide.

Now, nearly a decade later, after having crossed major dilatory hurdles, the long-awaited sequel, The Strangers: Prey at Night, is nigh.

The Strangers: Prey Tt Night trailer taps the spirit of the original film, expanding its setting to trailer park, where, once again, a family find themselves the fixated target of three masked maniacs. This time, however, the ordeal is suffered by Cindy (Christina Hendricks), husband Luke (Lewis Pullman) and daughter Kinsey (Bailee Madison). The modus operandi of the masked trio remains the same, albeit with a bit more panache – if terrorising a teenage girl by blasting Tiffany’s 1987 hit cover of “I Think We’re Alone Now” on the radio meets that qualification. However, the clear takeaway moment of this trailer lies in a dark sewer drain scene that might just give Pennywise the Clown a run for his money.

Johannes Roberts steps into the director’s chair, working off a script by original film director Bryan Bertino, as well as Ben Ketai. Roberts has been behind the camera for horror film outings such as 47 Metres Down, The Other Side of the Door, Storage 24 and F.

Strangers: Prey At Night is set to land in March 2018.