The strange sex scene of Supernova 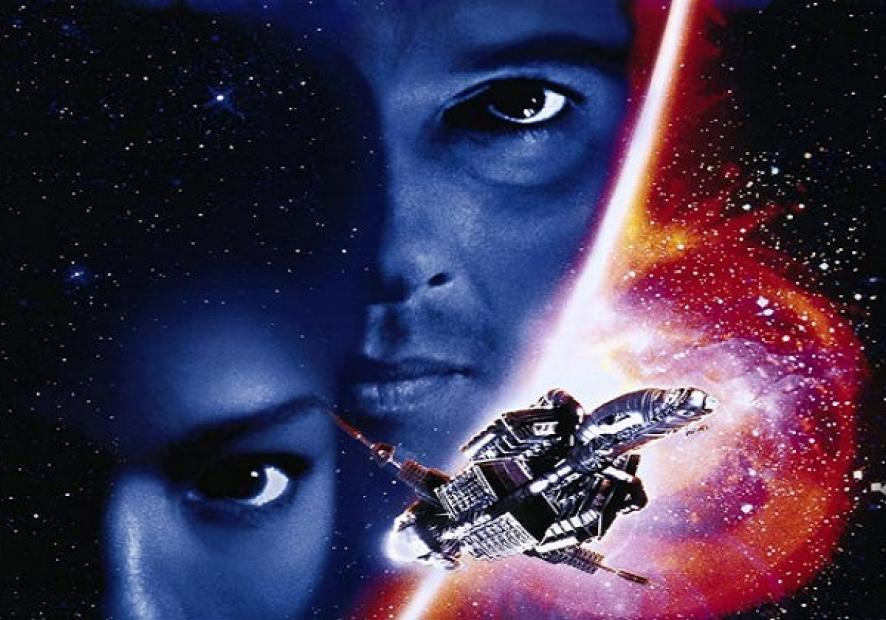 Supernova is a film with a messy story behind it. And a very, very odd sex scene…

Supernova is a film that started promisingly. Originated in 1990 under the title of Dead Star, the idea – as pitched by writer William Malone – would be for something akin to Dead Calm, just in space. Dead Calm is a great choice of influence too, with Phillip Noyce’s out-on-the-water thriller using isolation expertly, as Billy Zane puts in one of his best, and most menacing, screen performances.

Dead Star was set to follow a similar idea, and that meant a modest budget at most – around $6m was cited – would be needed to tell the story of alien artefacts being brought back to Earth. Enquires were made of H R Giger, who duly did some concept art work to help promote the script.

MGM was the studio that bit, although it had ideas. Lots of them, as it happened, and by 1997, the film had changed to focus on the ship Nova. Nova, went the story, would answer a distress call from a cargo ship that’s on the verge of being sucked into a black hole. There’s just one survivor in that version, and said survivor boards the Nova.

It was that story that was set to go forward, and Geoffrey Wright signed on to direct the movie. Over a decade before Alfonso Cuaron shot his film Gravity with the illusion of zero-g, Wright wanted to do it for real. MGM did not. Wright departed the movie two months before filming was set to begin, but he would not be the last on the directorial merry-go-round.

Next in was Jack Sholder, but his appointment didn’t meet with the approval of MGM’s then-chief, Frank Manusco. By this time, James Spader was attached to star in the film, and it was said to be he that suggested Walter Hill, veteran of hits such as 48 Hrs and The Warriors. Hill fancied doing something in science fiction, a genre new to him at the time, and thought he could fix the problems with the script. He signed on the line to direct.

This was all being done against a backrop of a threatened Screen Actors Guild strike, though, and MGM wanted to get its film in the can before that. As such, Hill came on board in March 1998, and MGM had booked start of production for April. The new director had a matter of weeks to get the script into some kind of shape, and he went about his work. As it turned out, the film that Hill was interested in making jarred with the one MGM had planned.

Still, filming began on time, although problems mounted, that would have a ramification for one of cinema’s oddest sex scenes of the past 20 years. See? If you read far enough, we eventually get to the mucky bit.

MGM had banked on a relationship with special effects company Digital Domain to help it deliver the film to its planned price. But the partnership between the two companies fell apart, and MGM lost the discounts it had counted on. The effects bill went up, the production bill had to be slashed to compensate for that.

Hill, though, still managed to film the movie’s sex scene, that was acted out between Peter Facinelli and Robin Tunney. The idea for the sequence was for it to be a weightless bout of space rumping and pumping, and it was a complex shot that – behave yourselves – called for the digital removal of a rotating pole in post-production. Eventually, filming wrapped in July 1998, and Hill retreated to the editing room for the rest of the year, with his cut by the end of 1998 still lacking all of the special effects moments that it required. MGM, though, was keen to see just what it had, and over Hill’s protests, it organised a test screening of the incomplete movie. A battle ensued between director and studio for extra funding to bring in additional footage, and it was this, combined with the inevitably disastrous test screening results, that eventually led to Hill quitting the film.

MGM, though, still needed its film. Jack Sholder came in and recut the movie, slashing out a lot of character work, and earning a better test screening score. Still not a great one, though, and MGM had one more go at luring Hill back. This time, he quoted the studio $5m for extra footage, a request the studio turned down. The call thus went to Francis Ford Coppola, then on the board of MGM, to help out. He racked up a bill of $1m by undertaking another re-edit of the movie. But in particular, he went back to the sex scene that Walter Hill had filmed.

Coppola was keen to keep the sequence in the movie, but he wanted the zero gravity insertion to be between two different characters. Hence, less than two minutes into the movie, we see stars Angela Bassett and James Spader interfacing, whilst table tennis is played in the next room. If you watch the scene and think it looks odd, though, then it’s because it does. For what Coppola did, and spent some of MGM’s money doing, was to digitally add Bassett and Spader’s heads to the bodies of Tunney and Facinelli. Tunney’s skin colour was altered as part of the process, too. The deep space docking lasting no more than a few seconds of screen time. Coppola was reportedly aiming to strengthen the relationship between the two characters, hence his decision to go with a part-digital hump.

Coppola’s changes barely made a difference though, save for inspiring award-losing websites to write about one of them nearly 20 years on. MGM did eventually release the film, even after further poor test screenings of the new cut. Walter Hill took his name off it, going by the moniker Thomas Lee (Alan Smithee, the traditional director alias, had long been rumbled). The film crept into cinemas in January 2000, and duly crept out again not long after.

When the DVD arrived the following summer, though, it offered a glimpse as to what could have been. Many deleted scenes were included. But still, the battle had been long lost. MGM was believed to have spent some $90m for the negative alone, before distribution and marketing, and its worldwide box office take didn’t even get to $15m. Critics too added to the red ink, with reviews savage. But there is still a sense that there was something here, be it a grizzly space movie as Hill fancied, or the Dead Calm idea that started it all.