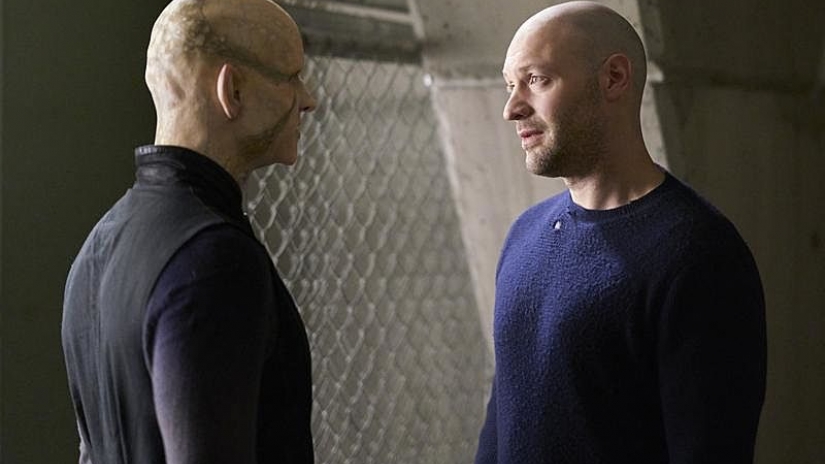 The Strain's penultimate ever episode ends on a potent cliffhanger that leads us into the final battle. Spoilers ahead…

With one episode left, The Strain has turned into a streamlined horror thriller that feels like any character can meet a horrific fate at any moment. Common wisdom would have had it that the epic Setrakian/Eichhorst confrontation would have been part of the grand finale. But no, the last battle between vampire hunter and strigoi went down a few episodes back clearing the way for the final battle between the Master and humanity. This week, the game board is set up one final time as Eph, Dutch, Fet, Gus, and Quinlan try to find a way to deliver their Hail Mary weapon, a for-real nuclear device, to the Master’s location in order to ensure an explosive end for the strigoi. In order to do so, our remaining heroes must overcome their own doubts and fears to end the strigoi threat that began when that fateful passenger jet landed in JFK so long ago.

The final battle begins with a heart to heart with Sanjay Desai, the scumbag human traitor that sold out his race in return for some creature comforts. You have to give the brain trust of The Strain credit, it has certainly turned Desai into an easy to loathe villain. Desai represents the worst of humanity, a man that considers himself above others because he has privilege. He thinks he has the right to feed the poor, the unfortunate, the crippled, the addicted to the strigoi because he considers them human refuse. Well this week, Dutch and company make him pay for that world view.

You see, Desai knows the location of the Master and our heroes need that information in order to end this struggle. When Quinlan steps into the interrogation, it’s all over for Desai. The Born has gotten hold of Desai’s lovely wife and is willing to drain the woman in order to get Desai to talk. And what a freakin’ scumbag Desai is. I mean really, he chirps like a canary to Quinlan and reveals the Master’s location, but later, when the Master confronts him for his disloyalty, Desai tells the strigoi lord that his wife was the one who canary-ed. I mean, dude, that’s your wife! More on that in a bit, but let’s just say that the Master does not appreciate such disloyalty amongst the lesser species of humanity.

So, I was worried about the nuke. Last week, Fet and Quinlan left soldier boy Roman to guard the device. Now, Roman might be likeable, funny, and pretty badass to be honest, but he has Red Shirt written all over him. We do get to see a bit of character development this week as Roman reveals that he was passed over for a few commissions and ended up a tech, but really, do any of us really think the recently introduced Roman is going to make it out of this thing alive? I thought it was only a matter of time before ‘ol Roman was taken down and the nuke stolen. Thankfully, Fet is thinking ahead and sends Gus to back up Roman and protect the bomb. Gus and Roman become pals and let’s all breathe a sigh of relief that the nuke is safe.

The Master tries though, and he sends his most secret and potent weapon to find the nuke. That weapon is none other than Zach Goodweather. Last week, Eph and Zach reunited. The whole thing is clearly a trap because just a few weeks ago, Zach let his little skittery strigoi bodyguard kill poor Abby, the young girl that won Zach’s heart. There’s no way that Zach just wants to reunite with daddy. Not after the whole ‘killing an innocent girl on top of blowing up Manhattan’ thing. Thankfully, Eph doesn’t just blindly trust Zach, although he really, really wants to. When Zach pops back up in their lives, of course, our group of now really seasoned heroes suspect that ‘lil Zach is just a tool of the Master. Zach wants to truly believe his son has changed, because honestly, what father wouldn’t? He tries to encourage Zach to forgive himself for setting off the nuke that wiped out NYC, and tried to be a father for a son that is about as far gone morally as a person can be? At times, it even seems like Zach might have changed, until the little shit slices his finger on a soda can and marks our heroes’ location with a dab of blood.

When Eph grabs his son and puts a gun to Zack’s head, I marked out harder than I mark out for Finn Balor’s Demon King entrance. At this moment, Eph finally fully sees what an arrogant little prick his son truly is. Eph realises that Zach is no different than Desai and before Eph and company abscond from their now compromised hiding place, they lock Zach up. Now I wish Eph double tapped little Zach in the dome, but we can’t expect any father to do that. But even though Zach still lives, it is clear that Eph has given up on his little crap heap of a child. When the Master arrives, he finds Zach locked up. He also finds Desai and as I said, the Master is sickened by Desai’s betrayal of his own wife. The Master bashes Desai’s brains out and kills the wife in front of Zach, showing the little petulant asshat the price of failure. Now, Zach really has nothing because his father is utterly sickened by his skid mark of a son and the Master may have no more use for the mewling little rat.

As for our other heroes. Gus continues his transformation from gangster to warrior. He finally mentions Anya again – the beautiful young Indian woman he helped escape New York a few seasons back. I guess this is telegraphing a happy ending for Gus as he wishes he was reunited with his lost love. It doesn’t seem like there’s a happy ending in the cards for Quinlan, as the Born implies that he is ready for his last stand. Quinlan is willing to set off the nuke himself and be vaporised so he can ensure that the millennia old curse of the Master finally ends. The Born sets off to do just that when he is besieged by a legion of strigoi. The episode ends with a huge standoff as Quinlan is surrounded inside the Empire State building while Gus, Eph, Dutch, and Fet are surrounded outside.

It’s a potent cliffhanger that leads us into the final battle and the end of The Strain. Who will survive and what will be left of them? Come back next week and find out as we bid farewell to one of the most daring horror shows of the 21st century. As for this week, we were treated to an emotionally charged action-driven almost final chapter that saw Eph finally realise that his son is a sentient dingleberry, so let’s call it a win.