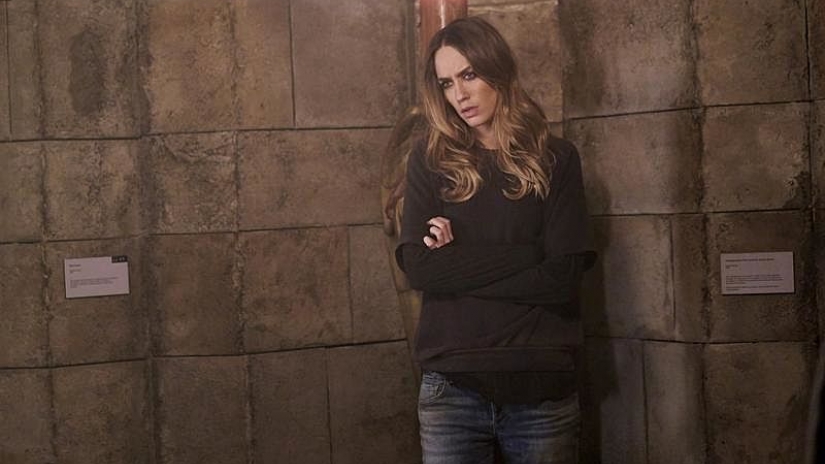 The latest episode of The Strain delivers an intense denouement to a conflict that has raged since the very first episode. Spoilers…

As there are only a few episodes of The Strain left, it is certain that fans are going to be forced to say goodbye to some beloved characters. Yes, when a series, particularly a series that is immersed in hardcore TV horror, comes to a close, death is inevitable. This week, the Grim Reaper visits The Strain in a big bad way and we are forced to say farewell to some Strain mainstays. The longtime Strain characters that meet their ends this week do so in an unforgettable fashion. Four seasons’ worth of storylines and character development crescendo to a climax that is as unforgettable as it is effective. Sadly, these long-time-coming character deaths are mixed in with some quick character dispatches that reek of ineffective plot convenience.

Let’s get the scheisse out of the way first, shall we? On this, the final season of The Strain, we were introduced to some pretty cool new characters. There was Charlotte who got to exit like a boss last week by helping Fet and Quinlan escape with the nuclear device. And hey, Charlotte didn’t have to die! But this week, sadly, Eph’s new friend and could have been future romantic partner Alex meets an untimely end. We spent a great deal of time with Alex this season. We learned about the death of her loved ones, we saw her lead an insurgency against the strigoi, and we saw the heartbreak when her brother was bitten and killed. Alex was developing nicely and she certainly had a great deal of screen time in which to develop which makes it rather perplexing that she was unceremoniously killed by Eichhorst this week. I guess I should set the stage.

This week, Eph, Dutch, and Setrakian are reunited. Setrakian’s age is taking a devastating toll on him particularly after being the victim of a strigoi blood marrow experiment. Setrakian is clearly dying and needs blood thinners to survive. In order to get the pills Setrakian needs, Dutch and Eph pay a visit to Gus and his black market stash while Alex stays behind to care for Setrakian. Eph secures the blood thinner much to the chagrin of Alonso Creem and more on that in a sec.

When Eph and Dutch leave a second time, Eichhorst busts onto the scene and Alex is quickly dispatched. So the question is, if Alex is just going to be shunted out of the story once our heroes reunite, why was she there in the first place? Why did we spend so much time with her backstory if none of it was going to make a damn bit of difference? The Strain moves at a breakneck pace, did we really need episode filler? It all makes one feel like every moment spent with Alex was a waste and it honestly left a bad taste in my mouth.

And the episode repeats the same sin moments later with Gus’s cousin Raul. We also spent a great deal of time getting to know Raul this season, and just like Alex, this week, Raul is killed with no drama. It’s like now that the old characters are all back, the writers just didn’t know what to do with the new additions. Which is really sad because the new players were all strong additions to the world of The Strain. Eichhorst kills Raul and Gus stands helpless while another member of his family is killed. It’s not like Raul’s death has any bearing on the outcome of the episode. It just felt like with Alex and Raul, there is some plot convenience housecleaning to be done this week, and quite frankly, The Strain is better than that.

There. I’ve vented. Now on to the good stuff. So I hear you asking, how did Eichhorst find Setrakian in order to kill both Alex and Raul? Well, Remember Creem, the street hustler who has grown more and more jealous of Gus? Yeah, Creem tries to cut a deal with the Master in exchange for the whereabouts of Setrakian and company. Of course, things don’t go too well for poor, arrogant Creem as the Master wants no part of any deal and stings Creem to make him a strigoi. Now that Creem is under the Master’s control, the Master and Eichhorst know all.

Eichhorst leads the charge against Setrakian and the showdown we have waited four years for is on! This episode powerfully establishes the idea that Setrakian has very little time left. After a lifetime of torment at the hands of Eichhorst and the strigoi, Setrakian’s body is failing. He has very little time left to take down Eichhorst and the Master. Thankfully, Eph gets Setrakian those blood thinners and even mixes him up a batch of that strigoi juice that has kept Setrakian alive for all those decades. Eph even informs Setrakian that the Warfarin blood thinner that is keeping Setrakian’s blood pumping is poison to strigoi. But even with a renewed drug gifted vigor, Setrakian is no match for Eichhorst.

Eichhorst, the most repellant villain on TV, takes great joy in tormenting and beating the weakened Setrakian, calling the old man “Jew” and the number tattooed on Setrakian’s arm by the Nazis. Richard Sammel gets to chew scenery as the vile Eichhorst one last time, and it seems like the masterful screen villain and character actor is relishing every last second.

That’s right. I said the last time Sammel plays Eichhorst. Because this is the final battle between strigoi and vampire hunter, Nazi and devout Jew, Eichhorst and Setrakian. For four seasons, this has been the central conflict of The Strain, a conflict we have experienced through many powerful and unforgettable flashbacks. And now it’s over. Because Eichhorst stings Setrakian. It seems like Eichhorst has finally won; he has finally proven to the aged Setrakian that the Jewish God is false and only the Master holds true power. Until it is revealed that Setrakian has taken the entire bottle of Warfarin effectively fatally poisoning Eichhorst. Yes, Setrakian will now die from the sting. He will have to kill himself or become a strigoi himself. But Eichhorst, the Master’s greatest weapon has been destroyed by Setrakian’s cunning. And when Setrakian lops off Eichhorst’s head, the sense of justice is strong. The old dying Jew has finally dispatched his tormentor and shows the Master that no matter how old, how weak, how abused humanity becomes, faith and goodness will always win. Some truly awesome stuff that brought the series full circle.

Some house cleaning. Fet and Quinlan are back in New York with the nuclear device but they will have a hard time bringing it into Manhattan because the Master has blown all the bridges. But that plotline will have to wait because this week is all about the final victory of Setrakian over Eichhorst. Yes, Setrakian will soon be gone, but he has robbed the Master of his most devout follower. So satisfying, and despite the poorly conceived deaths of Alex and Raul, the episode saves itself by delivering an intense denouncement to a conflict that has raged since the very first episode of The Strain.

And guess what, you guys? I’ve been taking Warfarin myself since I was a teenager! I have enough of the drug built up in my blood that I can totally toast a strigoi! Take that you Nazi leech bastards!