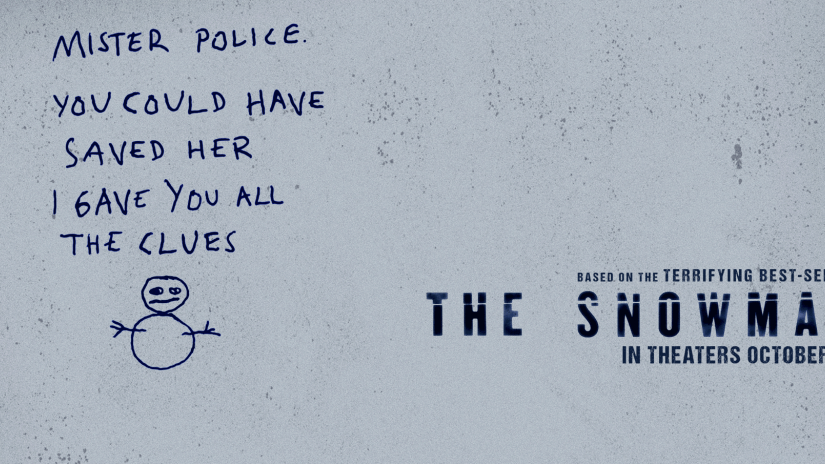 Michael Fassbender stars in the adaptation of Jo Nesbo's best-selling thriller, The Snowman. A satisfying mystery for the autumn? Well…

“I apologise for Oslo’s low murder rate,” says a police chief when boozy detective Harry Hole (Michael Fassbender) complains about a lack of satisfying mysteries to solven one bitter winter morning. Fortunately for Hole, the renewed activity of an elusive serial killer soon gives him a case to wrap his big brain around. Unfortunately, the killer also has a macabre interest in Hole’s personal life.

Seemingly triggered by snowfall, a serial killer is kidnapping women across Norway’s cities, leaving their dismembered bodies to be found lying face down in a drift several days later. The killer’s calling card: a snowman in the victim’s front garden, usually oriented to face the house. To crack the case, Hole joins forces with new recruit Katrine Bratt (Rebecca Ferguson).

Director Tomas Alfredson – who knows a thing or two about chilly films, having made the superb Let The Right One In and the Cold War thriller Tinker Tailor Soldier Spy – does his best to ratchet up the tension, but he can’t get away from a simple, inescapable fact: snowmen simply aren’t scary, even if they’re shot in ominous close-up. The descriptions of the killer’s antics, as written by Jo Nesbo in his best-selling novel, probably seemed much more disturbing on the page than they do when rendered for the big screen.

The cast, at least, is sterling stuff: alongside Fassbender and Ferguson you’ll find JK Simmons, Val Kilmer, Charlotte Gainsbourg, Chloe Sevigny and Toby Jones in supporting roles. The problem is, the screenplay, credited to Hossein Amini (Drive, The Two Faces Of January) and Peter Straughan, fails to give any of them much to do. Sevigny’s briefly glimpsed in a shed full of chickens; Gainsbourg’s trapped in a thankless role as Hole’s estranged wife, Rakel; Jones is a cop with a comb-over; Simmons smiles wanly through the faintly embarrassing part of a lecherous industrialist. Kilmer, evidently still recovering from an illness, cuts a sad, sickly figure here, and what little dialogue he has is very obviously looped after the fact.

Then again, the whole production smacks of trouble behind the scenes. The opening credits list the eminent Thelma Schoonmaker as editor; a startling sight to behold, given that The Snowman’s prologue is cut together with none of her coherence or finesse. IMDb, meanwhile, lists the editor as Claire Simpson, which suggests that a changing of the guard occurred at some point. Add in the news that The Snowman had a round of reshoots a year after its initial run of filming concluded, and there’s at least a bit of evidence that something went drastically wrong somewhere along the line.

The Snowman is pure pulp thriller material, and there’s nothing wrong with that. Fassbender’s perfectly fine, in a slightly anonymous, charisma-free way, as the archetypal detective who plays by his own rules; Ferguson is as good as she always is as his enigmatic, driven co-star. But what the movie sorely needed was the kind of filmmaker who can bring some stylistic verve to a formulaic plot: David Fincher, for example, has the surety of touch that makes adapting novels like The Girl With The Dragon Tattoo and Gone Girl feel somehow effortless.

Alfredson’s turned in superb work in the past, but The Snowman feels like the work of a filmmaker whose project has somehow slipped through his fingers. The pace plods when it should build; would-be shock sequences involving severed limbs have a tendency to provoke titters (at least in our screening) rather than gasps of horror. The plot also diverges from the book in curious ways we can’t describe in detail; it’s perhaps sufficient to say that certain characters’ story threads feel so curtailed and disjointedly told that the film’s been heavily, hastily reworked at some point.

Even composer Marco Beltrami seems out of sorts here: his score fills the gaps between the dialogue but adds little else – unless you count one scene where a Twilight Zone-style jingle plays as the camera zooms in on a severed limb, which is inadvertently hilarious. Cinematographer Dion Beebe at least captures the chilly atmosphere of Norway in winter – all empty white space and billowing licks of powdered snow. The rest of the film, we’re sad to report, soon dissolves like a snowball in front of a radiator.

The Snowman is out in UK cinemas on the 13th October.