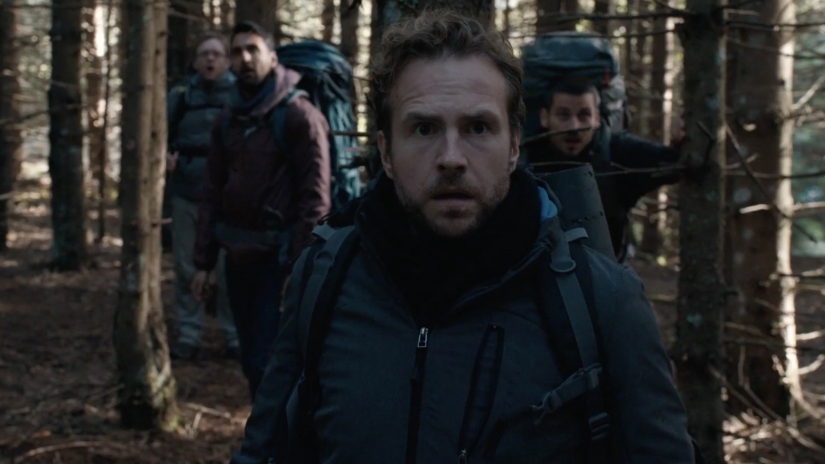 Heading into cinemas today is The Ritual – but is it any good? Glad you asked…

Four old friends convene for a hiking trip in Scandanavia, attempting to pay tribute to the fifth member of the group, while the trauma of his violent death wisps into their lunges and clouds their relationships like heavy smoke. When one of the gang injures his knee they decide head home early and take a shortcut through the woods, which – and if you’ve seen a horror film before you might be able guess this – turns out to be a bad idea. The woods are creepy and it becomes increasingly difficult to rationalise the strange things they’re seeing and experiencing. Particularly when it becomes apparent they’re being watched by someone, or something.

Adapting the novel of the same name by author Adam Nevill, screenwriter Joe Barton (not the hyper-aggro footballer, as far as we can tell) and director David Bruckner have an interesting story and some solid ideas and characters to work with here in The Ritual, but they also have a bit of a problem. How do you make a horror film about a group of people getting lost in the woods and encountering spooky business feel new when we’ve already seen it hundreds of times before?

Well, you don’t really. The Ritual is a film that does a lot of things well and gets the mechanisms right, but not one that’s surprising or particularly exciting, as it’s never able step out from under the films that have come before it, from The Blair Witch Project to The Wicker Man to Kill List.

Still, the great thing about horror films like this, with tried and tested mechanics, is that when they’re put together right they work. The atmosphere in The Ritual is great. It’s tense and creepy. It’s nicely photographed, with the woods seeming to expand further and further outwards while simultaneously closing in on the characters. As they move through the woods, everything looks the same but different. The pacing is good too, so when the characters start to unravel we’re ready for it. It feels deserved; with what they’re going through, they should be distressed, but it also doesn’t last so long as to ever feel too much.

The characters are all alright; they feel real and are really well acted. As with the set-up, we’ve seen all of them before. It’s hard not to feel like these guys were perhaps too busy playing rugby at university and missed their shift getting diced up in a campground teen slasher and so are getting to the woods 10 years too late.

The cast do a great job. The four main leads are on screen, between them for essentially the entire film, and they all put in really good performances. Asher Ali (‘where do I know him fr… Four Lions!’) is well served by the material and feels very real as the freaked-out-and-quite-right-too Phil. But then all of the characters convince. There isn’t a weak link amongst the four lead actors.

The build up work in The Ritual is deliberate and carefully unrolled, with a steady sense of escalation. The first hour is better than the last 30 minutes. The end isn’t bad, necessarily, but it arguably reveals too much of what’s in the shadows and certainly feels a bit flat. It could do with a bit more tension and a bit more hard-fought conflict.

The thing is, none of The Ritual is bad. In fact, it’s very well measured and does a good job of what it does. It just feels like an exercise in okayism, though. The mechanisms work and it looks good and it’s enjoyable, but it’s hard to imagine it lingering in the memory. It’s familiar, functional and refined, like a Waitrose Blair Witch Project.

Hardcore horror fans will do worse of an afternoon at the pictures but those buzzing off this year’s big horror flicks like Get Out, Split and It might find themselves a bit disappointed.

The Ritual is in UK cinemas from Friday 13th of October.