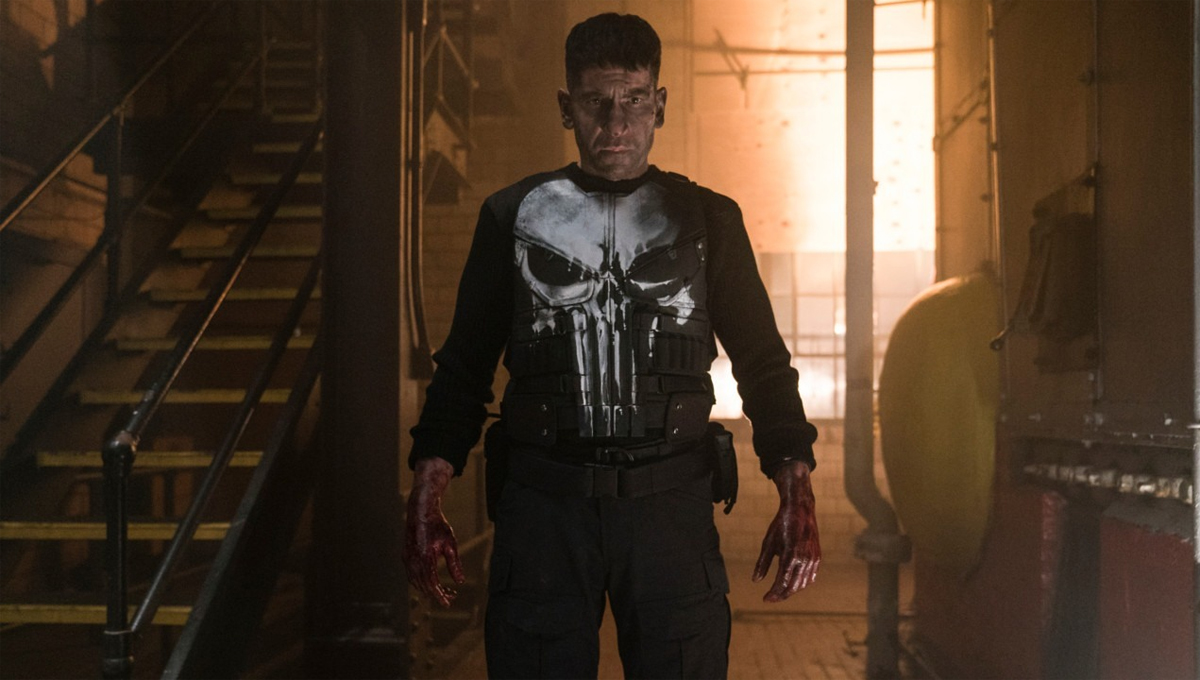 The Punisher fully embraces his brand in episode 11, Danger Close. Spoilers ahead in our review…

Ah, now THAT’s the Punisher. It’s no coincidence that Frank finally embraces his brand in this episode by wearing the skull. Whether or not you agree with mowing down innocent Private Military Contractors who are just doing their job, there’s no denying that it’s fun to see hyper-competent Frank Castle doing what he does best.

Admittedly you’d have to be pretty cold not to think that Frank was in quite a grey area when he murdered the guy who pointed out his entire mission was need-to-know (I found it hard not to wonder if that guy had, like, kids and a wife at home) but if you can accept that those corpses were engaging in combat on the understanding that their duty was to kill or be killed no matter the target, it kind of works. Unfortunately that’s not so different from how Frank lived when he was doing black ops for the CIA.

That said, this version of Castle is clearly more emotional than the comics version. You can count on one hand the number of times the comics Punisher feels anything other than irritation and disgust. He certainly wouldn’t be shouting Russo’s name during that showdown (though I LOVED the touch of Frank being annoyed, even offended that Russo didn’t come for him himself.)

The interesting thing is that this wasn’t motivated by Frank’s concern for himself, or even his own family – in fact, it was protecting the Liebermans, Micro included, that made him do what he did. This is arguably The Punisher at his most heroic. If that’s the direction they take the character – he kills so that other people live – that’d be an interesting twist. Again, not to sound like a broken record, but it’s hard to argue that the comics version of the character is doing anything other than killing to make himself feel good.

(Aside: I like how as soon as they show The Punisher on TV the Liebermans are like OH RIGHT, THAT PUNISHER. I’m trying to think of a reasonable equivalent. Would any of us notice if, say, Julian Assange was dropping by occasionally but calling himself Jeff?)

As for Russo himself, it’s interesting to see him trying to escape his role as a grunt. His aspirations have been front-loaded in the series – nice suit, good watch, respectable company – unfortunately he’s still the guy sticking the knife in when some murdering needs to be done. Now he’s trying to become the guy behind the guys, and in some way actually accomplishing that, not least because he’d be dead if he’d gone in himself. I doubt Rawlins is going to let him get away with that, of course, especially after offering him up as a scapegoat to his boss, Marion James.

And, finally, I was happy to see Micro reunited with (part of) his family, not least because it means we’re going to see some actual fallout from that rather than a single happy reunion scene at the end. I kind of can’t wait to see what Sarah says…

Oh, and this scene gave us a good comics reference: Frank chucking a head with a grenade attached to it. I’m 90% sure that’s a reference to something that happens in Welcome Back Frank (or at the very least, an Ennis/Dillon issue) where he stuffs the grenade in the crook’s mouth, but I don’t have time to check every comic and for a change I’ve got no issue reference to go on. It’s definitely the kind of Ennis-type violence I’d have liked a little more of though, where the goal is to terrify and unnerve the people around his most recent victim to put them on the back foot.