The Mummy and Lifeforce: the strange parallels 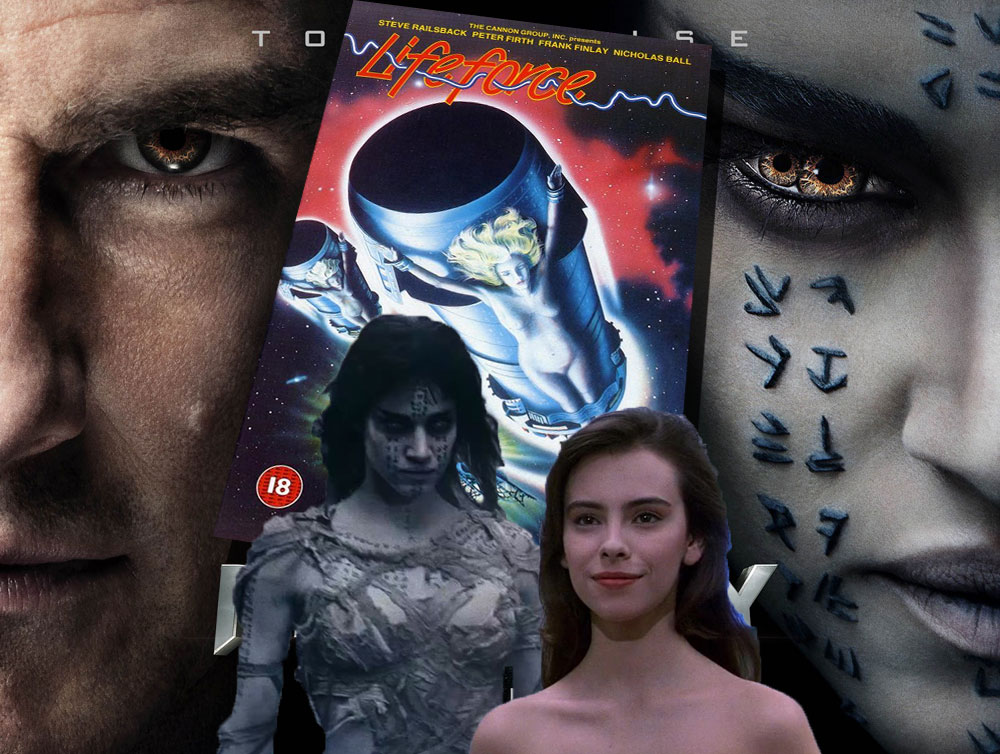 This year's The Mummy reboot shares a surprising amount with the 1985 sci-fi horror classic, Lifeforce…

NB: The following contains spoilers for 2017’s The Mummy and 1985’s Lifeforce.

When Universal Studios made The Mummy back in 1932, it was in the wake of Tut-mania: the fascination with Ancient Egypt following the discovery of King Tutankhamun’s tomb a decade earlier. As Egyptian-inspired symbols and designs began to appear on everything from jewellery to cigarette ads, stories began to circulate that the pharoah’s tomb was cursed – and thus The Mummy, about a group of archaeologists who provoke the wrath of a long-dead Imhotep (Boris Karloff, hypnotic as always) emerged.

The Mummy’s success was such that it became a long-running franchise: Universal made four direct sequels between 1940 and 1944, with a comedy spin-off, Abbott And Costello Meet The Mummy, joining them in 1955. The UK’s Hammer Film Productions followed with an unrelated series of its own between 1959 and 1971, while Universal returned to the concept in the late 1990s.

Perhaps realising that The Mummy couldn’t compete with the rawness of late 20th century horror, Universal reinvisioned the franchise as a matinee adventure in the Indiana Jones mode: Brendan Fraser starred as the square-jawed, six-shooter wielding hero Rick O’Connell, while a glowering Arnold Vosloo played the vengeful Imhotep. It was bright, breezy, and successful enough to spawn two sequels and a spin-off featuring Dwayne Johnson, beginning with The Scorpion King in 2002 (the direct-to-video sequels replaced The Rock with more affordable actors: Michael Copon and Victor Webster).

In the early 2010s, Universal decided it was again time to update the franchise for a new era – not to mention a generation of young movie-goers who’d grown up with things like Marvel’s Cinematic Universe. A modern Mummy had to have scale, spectacle and, perhaps most importantly of all, franchise-able longevity. So it was that, from around 2012 onwards, a succession of writers and directors tried to figure out what a 21st century Mummy movie would look like – among them Jon Spaihts, who wrote an early draft of Ridley Scott’s Prometheus, Underworld director Len Wiseman, and Andres Muschietti, who recently went on to direct Stephen King’s It.

As co-written by Alex Kurtzman (who also directed), The Mummy emerged as a singularly odd beast earlier this year. It replaces the period settings of the old movies with a story that largely takes place in modern-day Britain and Iraq. It’s designed as a launch-pad for a much larger network of interlinked films (dubbed the Dark Universe), so it co-stars Russell Crowe as one Dr Henry Jekyll – one of several teases for movies yet to come.  The lead role, meanwhile, goes to Tom Cruise as a gung-ho military-guy turned tomb raider – a character who Universal might have hoped would provide the kind of charismatic lynchpin to a nascent franchise that Robert Downey Jr gave to Marvel Studios and Iron Man.

Much of this could be gleaned just from watching the wall-to-wall trailers and TV spots in the run up to The Mummy’s release. What we weren’t banking on was just how similar the film would be to a cult Tobe Hooper movie from the mid-1980s.

Bankrolled by Cannon Films, at a point when the masters of ninja movies and Chuck Norris action flicks was making a play for the big leagues, Lifeforce quickly became the subject of bemused fascination. Based on Colin Wilson’s novel The Space Vampires, it contained full-frontal nudity, lashings of gore and a smattering of delightfully eccentric sci-fi ideas (effects genius John Dykstra based his alien spaceship design on an artichoke).

Lifeforce also cost $25 million, back when $25 million was still a huge sum of money to spend on a movie – to put the figure in perspective, consider that Universal spent $19 million on making Back To The Future, a hit sci-fi comedy that people actually went to the cinema and watched. Lifeforce, on the other hand, had to make do with a cult following – thanks partly to its aforementioned nudity, we suppose, and also thanks to its sheer ‘what-the-hell-did-I-just-see’ weirdness.

Now, we’re by no means the first to mention The Mummy and Lifeforce in the same breath, but the comparisons are quite remarkable once the two are placed side by side.

In The Mummy, an ancient tomb is uncovered, a mummified body is removed and brought back to the UK, where it’s magically revived and proceeds to wreck havoc. Said mummified body is Princess Ahmanet, played by Sofia Boutella – a spectral being who gathers her power by sucking the energy from human victims. Those victims then become a kind of zombie army for Ahmanet, and are soon joined by the corpses of knights recently disinterred by Crossrail excavation workers. It’s soon established that Cruise’s character has a supernatural connection with Ahmanet – he’s possessed by the body of the Egyptian god, Set – and so he heads to London for the final stormy confrontation.

The plot of Lifeforce is draped in a sci-fi dressing gown, but it’s broadly the same. A British space mission to the tail of Halley’s Comet leads to the discovery of a hidden alien ship. Inside, in a tomb-like chamber, astronauts find the bodies of three nude humanoids, apparently in a state of suspended animation. After a lot of kerfuffle, one of these humanoids, played by French actress Mathilda May, wakes up and starts sucking the energy (or lifeforce) from her human victims. Those victims subsequently become a shambling zombie horde, which causes chaos in the middle of London, as the two other humanoids wake up and start using their evil powers, too.

Fortunately, there’s a hero waiting in the wings to save the day. Colonel Tom Carlsen (Steve Railsback) was the only astronaut to survive the mission to Halley’s Comet, and like Tom Cruise’s Sergeant Nick Morton, Carlsen has a supernatural link to the villainess. As London falls to the zombie plague, Carlsen reunites with the female space vampire in St Pauls and successfully thwarts the otherworldly menace. While we’re not saying that The Mummy’s various writers intentionally copied Lifeforce, it’s nevertheless fascinating how two movies separated by more than 30 years – and resulting from two very different studio cultures – could wind up with so many parallels. When Tobe Hooper updated Colin Wilson’s 70s novel, he did so with an eye on the current news: while Lifeforce was being made, Halley’s Comet was set to swing past Earth in 1986. In the original novel, the space vampires are simply found in an asteroid field.

In updating its own Mummy franchise, Universal uses the huge Crossrail project currently underway in London – a 73-mile railway line that will run through London and the home counties – as its backdrop. (This latter aspect may represent another origin in common with Lifeforce: Tobe Hooper admitting to being inspired by the classic Quatermass And The Pit, in which an ancient alien spacecraft is found by excavators at a London Underground station.)

More significantly, both movies spend extraordinary sums of money on telling utterly bizarre stories of horror, action and adventure. According to Deadline, Universal spent $195 million on The Mummy, plus a further $150 million on prints and advertising expenses. All this on what is essentially a horror B-movie about a villainess wrapped in bandages who causes a spot of public property damage near Cafe Nero on Trafalgar Square. The Mummy may be a star vehicle for Tom Cruise, but it’s not much less silly, really, than Lifeforce was back in the summer of 85. (Just to ring the changes, Cruise’s sidekick Vail, who dies and comes back as a spectre only Cruise can see, feels like something roped in from another 80s cult classic – John Landis’s Werewolf Of London.) What Universal might not have reckoned on was The Mummy‘s fortunes at the box office. The Mummy’s global take of about $409 million worldwide means the glossy reboot broke even, but it’s hardly the stuff movie universes are made of. At the time of writing, the studio’s plans for a Bride Of Frankenstein remake, starring Javier Bardem and Angelina Jolie, are on hold. What will become of the Creature From The Black Lagoon, Invisible Man, Van Helsing and Dracula movies is currently unclear.

In 1985, Lifeforce had a similarly dismal time of things. It made around $11 million in the US, and probably a fair percentage more elsewhere, but all told, Tobe Hooper’s movie would have had to rely on the sale and rental of VHS tapes to bring in anything like a decent profit. It was hardly the blockbuster that Cannon Films had presumably hoped from its considerable investment. In time, of course, Lifeforce would become regarded in some quarters as a work of camp genius. Where else could you see a pre-Star Trek: TNG Patrick Stewart possessed by a female alien? (“I am the feminine in your mind, Carlsen!”)

There’s the outside possibility that The Mummy will be regarded in a similar way, once the dust has settled and a few years have passed. It lacks the outrageous quality Tobe Hooper bought to his mash-up, and instead comes across as a muddled creature that is willing to do just about anything to please its audience. Still, there are at least a few moments of true, ‘who signed off on this’ madness. Take, for example, Russell Crowe’s stunningly bad turn as the maniacal alter-ego, Mr Hyde.

“I’m offerin’ you a partnership!” Mr Hyde says, in a truly avant garde interpretation of a Cockney accent. “Fink about it! The ladeez will love us! “

It’s proof that, even among all the high-concept script ideas and multi-million-dollar CGI, there’s no greater special effect than a charismatic actor operating at the height of his powers. Someone give that guy an Oscar, already.