The Man Who Laughs: the movie that inspired The Joker 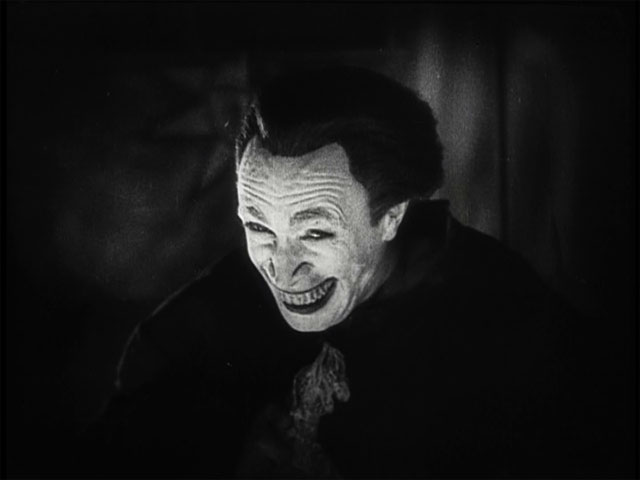 One of the earliest scary clown movies, The Man Who Laughs was also an influence on the creation of Batman villain, The Joker…

Clowns, both creepy and, well, slightly less creepy, were lurking about in the shadows for thousands of years before Stephen King’s evil clown Pennywise shambled along with those sinister red balloons of his. The Egyptians had them, the Greeks had them, the Romans had them. But in the 17th and 18th centuries, an interesting and telling thing happened.

During the Middle Ages, the clown and the performing freak were essentially one and the same. The jesters and fools who entertained in the royal courts of Europe were usually attired in flamboyant and garish costumes and makeup, and were often physically deformed in some way. After that, however, the two began to tear themselves apart, with the frolicking prankster in the funny outfit and facepaint heading one way, and the human oddity heading the other. The split was cemented in the late 1700s when Joseph Grimaldi, a hugely popular entertainer in his day, gave us the first modern circus clown as we’ve come to know them. Novelist Victor Hugo returned to a point just prior to that transitional split in his 1869 novel, L’Homme Qui Rit, or The Man Who Laughs.

At the time, Hugo was living in exile on the Channel Islands after certain humourless French aristocrats took umbrage at the way they were portrayed in a couple of his earlier, highly politicised novels like Les Miserables and The Hunchback Of Notre Dame. Clearly with an axe to grind, Hugo sat down and wrote another dark political melodrama about aristocratic skullduggery, betrayal, murder, revenge, corruption, and rightful heirs wronged, with a few good-hearted commoners and a sweet love story tossed in for contrast.

Without getting into all the turgid and convoluted mechanics of the plot, in the mid-1600s that wicked King James II of France has a political rival murdered and orders the man’s young son have his mouth carved into a permanently leering grin (for the record, this was not an unheard of practice at the time, though it would only really come into vogue among British gangsters of the ’30s and ’40s). Abandoned to wander on his own, the disfigured young boy, Gwynplaine, stumbles across an orphaned infant blind girl in the snow, the two are adopted by the manager of a small traveling carnival, and Gwynplaine, knowing nothing of his own background, eventually becomes a hugely popular sideshow attraction. Billed as The Man Who Laughs, Gwynplaine’s half clown/half freak act finds him capering merrily about the stage for a bit with the lower part of his face covered, before finally revealing his horrifying permanent grin to the audience. Inevitably, the growing crowds he attracts respond with shock and uproarious laughter. In that way, it could be argued the story was an early glimpse into the pain and horror and cruelty that lay at the heart of all clowndom.

Meanwhile Dea, the blind girl, turns out to be quite beautiful, and better still one of those beautiful blind girls with a soft spot for kind-hearted disfigured freaks. The two fall in love, of course, and after that things get ridiculously complex. Among other things, a noblewoman harbouring a certain sexual fetish decides to adopt Gwynplaine as her own personal plaything, his past is revealed, and he ascends to his rightful spot as a nobleman, grotesque grin and all. He immediately begins lecturing his new colleagues about the sad plight of the underclass, and everything goes to hell, closing with one unexpected super bummer of an ending. It would go on to become Hugo’s least popular novel.

By the early ’20s, The Man Who Laughs had already been turned into a stage play and two films – the first out of France and the second, Germany. In 1924, noting the huge success of their adaptation of Hugo’s The Hunchback Of Notre Dame the previous year, Universal executives thought The Man Who Laughs had all the makings of another dandy Lon Chaney vehicle. So a contract was drawn up and Chaney signed. Only problem was, right about then Universal realised they’d never exactly bothered to obtain the rights to the book. The deal fell through, and Chaney went on to make The Phantom Of The Opera instead. Then, ironically enough, he moved to the newly-founded MGM, where his vengeful clown melodrama, He Who Gets Slapped, would become the first film shot on the studio’s new soundstage. Three years later in 1927, Universal finally got their act together, obtained the rights to the book, and, since Chaney was no longer available, brought in Paul Leni to direct and Conrad Veidt to star as Gwynplaine. It was a good move all around. Both were veterans of German Expressionist cinema, with Veidt having made a splash as the murderous somnambulist in The Cabinet Of Dr. Caligari, and Leni having already worked with Veidt on the memorable Expressionist mystery Waxworks.

With a director and star in place, Universal, again noting the hits they’d had with their big budget Hunchback Of Notre Dame and Phantom Of The Opera extravaganzas, pulled out all the stops, budgeting the film at an almost-unheard of $1 million. Along with peppering the rest of the large cast with silent-era stalwarts, the same man who’d designed Phantom’s sets was brought in to push the Expressionism even further for The Man Who Laughs, and newly-arrived makeup chief Jack Pierce was given carte blanche to go nuts designing the Gwynplaine makeup. Crafting a set of snaggly, misshapen false teeth equipped with hidden hooks to pull the corners of Veidt’s mouth back into a tortured grin and applying a light green makeup that would give his face an inhuman pallor, Pierce took more than a few cues from Chaney’s own Phantom makeup.

Although the core of Hugo’s plot remains intact, it has been simplified considerably – but it doesn’t matter. And like Hunchback, The Man Who Laughs is by no stretch a horror film, but a period melodrama – that doesn’t matter, either. What matters is the look of the film – the deep shadows, the exaggerated and disconcerting angles, the deliberately artificial sets and backdrops, and the highly stylised seedy carnival atmosphere throughout. At the center of it all, the iconic image of Veidt’s Gwynplaine, with his sad and bulging eyes, wild hair, and that immobile savage grin revealing a mouthful of oversized crooked teeth. For his part, Veidt offers up a brilliant and subtle performance, dredging Gwynplaine’s internal pain, anger, and pathos to the surface to belie that frozen smile. No, it’s not a horror movie, but it sure looks like one, and that’s what audiences took away.

Cited by numerous critics and historians as one of the last great examples of true German Expressionist filmmaking, The Man Who Laughs is not as well remembered today as it should be, apart from Jack Pierce’s enduring makeup effects. Still, its profound influence is inescapable. Even more directly than Caligari, Leni’s film helped define the lighting, set design, and overall atmosphere of not only the straight horror films Universal would begin producing just a couple years later, but also the noir films two decades down the line.

Later, Bill Finger and Bob Kane never made any bones about the fact that the design for The Joker was lifted pretty much directly from The Man Who Laughs, which right there should earn the picture a spot in the film library of any Batman completist. And though a few well-meaning souls have tried to argue he was likewise the inspiration for the grinning logo of Coney Island’s Steeplechase Park (later adopted as the unofficial mascot of Coney itself), Funny Face, as he’s known, was first introduced in 1897, so there goes that silly theory. Whether or not Funny Face may have been an inspiration for Jack Pierce, however, remains unclear.

This article originally appeared on Den Of Geek US