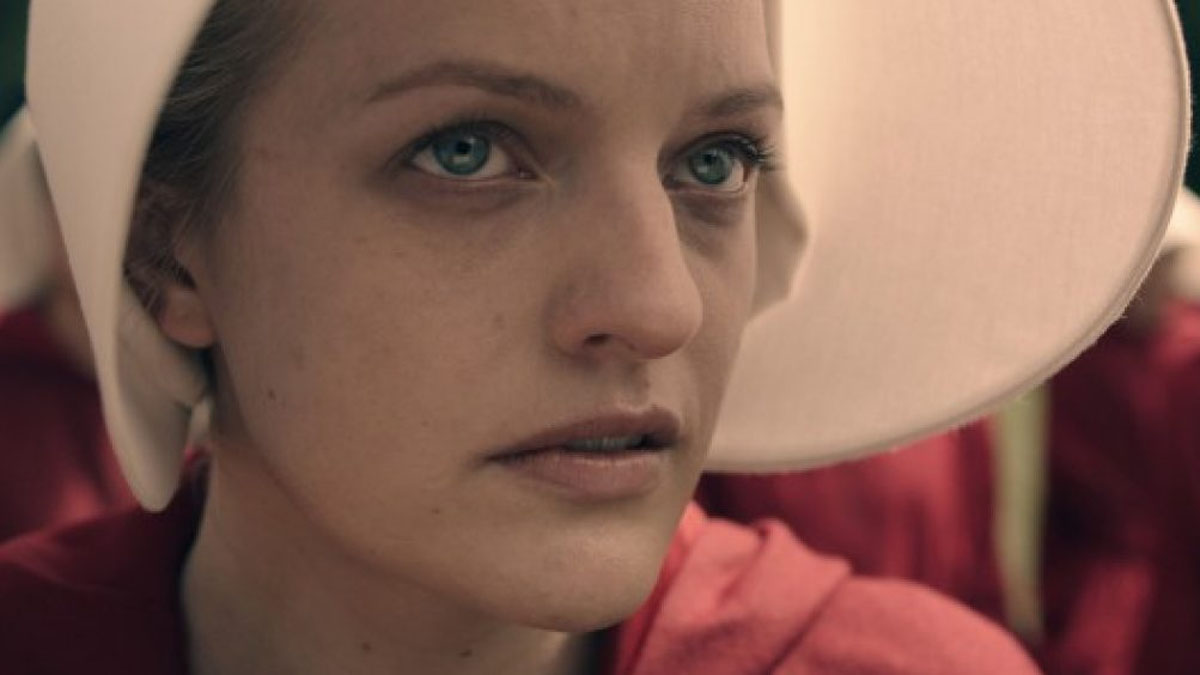 The Handmaid’s Tale season one has been a discomfiting triumph from start to finish. Spoilers ahead in our finale review…

Before The Handmaid’s Tale, I didn’t think TV drama could sustain a sense of dread for longer than an episode. I certainly didn’t conceive of one being able to keep it up for an entire season. Utter, unutterable dread with only the briefest of let-ups is the mood of this show. Ten weeks ago, it made our eyes widen in horror, and in this finale, they widened still.

It’d be wrong to say that I’m glad it’s over, but Lord, I could use a rest. Couldn’t you?

Everything Offred’s been dreading—falling pregnant, Serena Joy finding out about the Commander’s transgressions, being taken away in a black van—happened by the end of Night, and she greeted it all with a sense of floating-above-it-all relief. Perhaps it’s like the moment an overblown balloon finally bursts. There’s a loud bang, but at least the tension of when the inevitable will happen is over.

There’s a chance of course, that Nick has come through for Offred. Perhaps the ferocious speech she made a couple of episodes ago questioning whether he was satisfied with this life worked its way underneath that impassive expression and caused him to act. Perhaps the news of her pregnancy finally pushed him to plan a rescue.

Or you know, perhaps she’s being driven away to be electrocuted with cattle-prods and have an arm removed. Season two, now due to sail far beyond the boundaries of Margaret Atwood’s novel, will tell.

There’s another reason Offred was floating above it all: after learning there was “an us” in episode one, in episode ten she learnt that she was part of an army. Gilead rules by divide and conquer, making it every woman for herself in the struggle to stay alive and in one piece. Together, the Handmaids have power. Not only are they a valuable commodity but acting en masse, they’re an irrefutable force – an army. They looked and sounded as much in a column moving down the street like a unit patrol, their marching steps audible.

Bringing episode one’s Salvaging ritual back in the finale bookended this season to show how far Offred and the others had come. From the outside, they may look the same, but a fire had been lit inside them. Their rebellion was performed with exacting humility (“I’m sorry, Aunt Lydia”) just as they’d been taught at the end of a taser. It was such a rare feel-good moment that I felt sure it couldn’t last. Like Moira being led in silent fear around that Canadian refugee centre, so traumatised by years of mistreatment she couldn’t believe or trust in kindness, The Handmaid’s Tale has ruined me as a viewer. Surely triumph isn’t allowed? Surely those Guardians are about to open fire on the whole damn lot of them and end the season with a bloodbath?

But no. We were allowed to keep our feel-good movie moment. For now at least. We were even given another in the happy reunion of Moira and Luke, who called each other family and clung to each other like cartoon puppies. Unpunished sentiment from The Handmaid’s Tale, I never thought I’d see the day.

There was more hope still, in Offred’s discovery that her illicit package didn’t hold anthrax or a bomb, but voices. Women like June, all over Gilead, had broken the law to write their names, the names of the people they’d lost and the people they were trying to find, in the hope that things would change.

It couldn’t all be tearful hope, of course. The finale also contained one of the most upsetting scenes to watch of the entire season, which, you know, is saying something. Serena Joy is all those words June called her and more for pulling that stunt with Hannah. No wonder the Commander’s running scared and trying to make nice. He doesn’t want to end up taking his arm home from the hospital in a Tupperware box.

That was the fate of Commander Putnam, and it was a gory scene. As more balance to the shafts of light in this episode, we were treated to some grade-A body horror. Particularly chilling was the deft speed at which the surgeons went about their task. Just how many limbs have they sawn off in the name of God? Is there a waiting list?

We’re the ones waiting now, to find out what’s next for Offred. Whatever happens after that van pulls away, if season two is as well-written, striking-looking and capably performed and powerful as the past ten episodes, it won’t only be worth the wait, it’ll require one.

Read Louisa’s review of the previous episode, The Bridge, here.