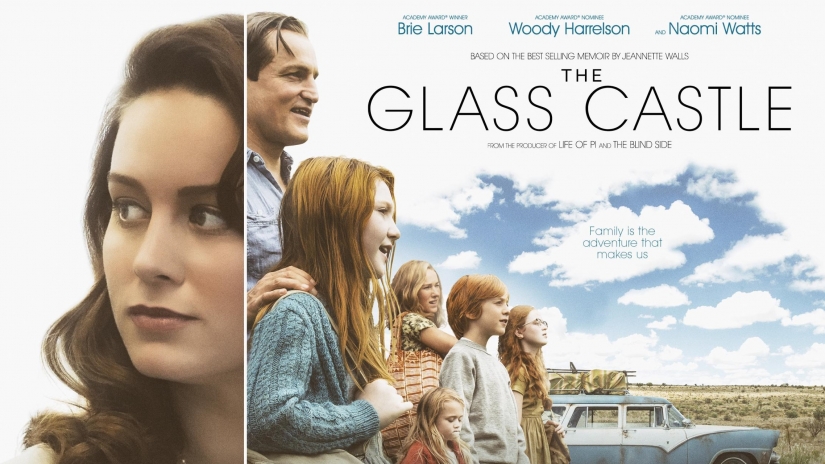 Brie Larson takes the lead in The Glass Castle, that lands in UK cinemas today. Here's our review…

The Glass Castle is the kind of film which used to be more common but doesn’t appear so often anymore – at least to this extent of quality, profile and budget. ‘Based on a true story about a dysfunctional family’ films tend to appear on tv at anti-social times and on anti-social channels, which varying degrees of success. Thankfully, for the most part, The Glass Castle is a real success. It’s a moving tale of a family across the decades, overcoming obstacles thrown at them by the outside world and each other.

A unit, unlike any other, who spent the childhood of their four children squatting in homes and living in poverty – second eldest Jeannette wrote her memoir in 2005, sharing the story of her unconventional childhood and her deeply dysfunctional parents with the world. Twelve years later it’s made it to the big screen, helmed by director Destin Daniel Cretton – whose directorial debut was the astonishingly wonderful Short Term 12 (2013). A total must-see if you’re yet to see it – the film which truly showed Brie Larson’s exceptional talent.

The Glass Castle also features Larson in lead, playing Jeannette. We first meet her during a business dinner with her fiancé David (played by New Girl’s Max Greenfield – playing with the douche level turned up to 11). The dinner goes well, she’s charming, sophisticated yet approachable and conversation is light – until David gets her to lie about her upbringing. Then, during her cab ride home – in a moment of kismet rarely seen outside of cinema – Jeannette sees her parents on her way back to the glamorous New York apartment she shares with David. Her parents, Rose & Rex (Naomi Watts and Woody Harrelson), are dumpster-diving for food. Embarrassed, she chooses to ignore them – an act they notice and do not take lightly. Confronted by her past, and the complicated relationship she has with both parents, memories start to come back thick and fast.

The film takes the approach of intercutting Jeannette’s ‘now’ (the late 80s) with her childhood. These are told in most chronological order – in each flashback Jeannette is a little bit older and a lot wiser to how different her upbringing is – tend to be inspired by what is going on in her present day, and vary in length. Some are brief visits and some are extended stays. Each one exposes more layers of her relationship with her parents and the complicated nature of her childhood. From the first flashback her parents’ off-hand approach to parenting is made apparent, but it’s clear there’s a lot of joy present too. This fluctuates with each flashback, as does the audience response to Rex & Rose. Initially they seem quirky, fun and free-spirited but a shift begins to occur and revelations began to sour their ideal.

The blend of past and present is skilful, rarely does one section fell overlong, but much of this is down to the power of the cast. The child actors, playing the four Walls siblings, are exceptional – Ella Anderson as young Jeannette and Sadie Sink as young oldest sibling Lori are both real ones to watch. Larson does well with what she’s given – a solid performance of haunted resilience. Watts may have less to do than Harrelson but she still adds so much heart to each scene. And Harrelson? His performance here may be his finest yet.

The Glass Castle shares some cinematic DNA with last year’s Captain Fantastic – both are about dysfunctional families with children struggling to find their place in the world. Just picture darker, grittier, less joyful and based on a true story…

The Glass Castle is in UK cinemas from 6th October.