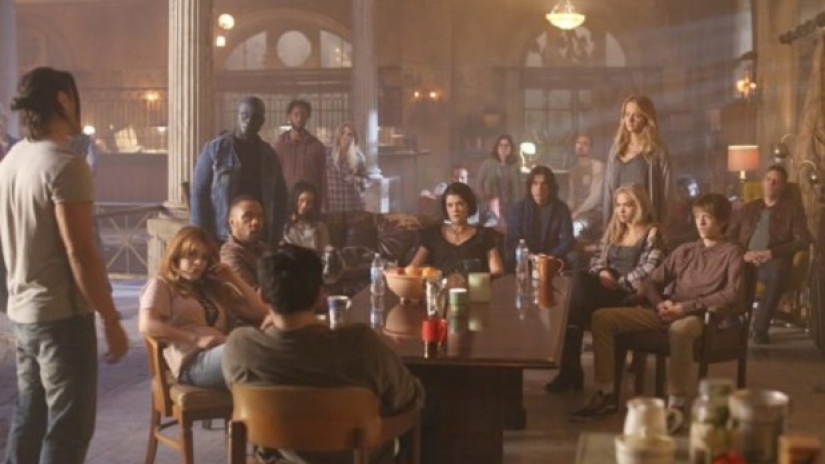 The Gifted gives us our first action episode, and it is as X-Men as they come. Spoilers ahead in our review…

There are certain tropes that are nearly universal in every effective X-Men story. The good ones are always full of soapy non-mutant backstories, melodramatic romance subplots, and visually interesting applications of powers. The longer The Gifted goes on, the more confident I am that the folks making it think the same things. This week’s episode, eXit strategy, hit all four to great effect.

First and foremost, this was an action episode. The whole plot centred on breaking up a convoy carrying Reed Strucker and Polaris to a Sentinel Services black site to rescue them. We also got a look into Eclipse’s background, and his history with a cartel boss’s daughter; and follow up on last week’s telepathic tomfoolery where Dreamer put a memory of her own tender moment with Thunderbird in Blink’s mind to help her save John. And in the background, Lauren and Andy are learning to use their powers as a team to help with the breakout – Lauren uses a force field to box in the force that Andy shoots from his mind.

All of these things when described out loud are utterly absurd, but that’s why The Gifted is turning into such a good X-Men adaptation. In any given Bronze Age story, you’ve got some sort of love polyhedron centred around Jean Grey, Colossus hucking Wolverine at something in the air, Kitty Pryde angsting about ballet practice, and Storm monologuing. And yet, these stories were completely engrossing.

What makes The Gifted good is that it can do all those things without you even noticing. The quality of acting is very good: Natalie Lind and Percy White are very believable as siblings without being stereotypical or unnecessarily obnoxious, and Blair Redford’s Thunderbird is maybe my favorite portrayal of the character. And the writing is smartly structured. The focus stays pretty close on the Strucker family, and while the episodes never feel overstuffed, they do manage to accomplish a surprising amount of plot propulsion and character development without ever resorting to infodumps.

It’s still early, but if things keep going as they’ve been going, The Gifted should end up one of the better live action entries into the X-Men world.

-The technopath with Thunderbird in the opening scene is Pulse, a mutant introduced by Pete Milligan and Salvador Larocca back in 2005 while the X-books spun their wheels between Whedon’s Astonishing X-Men and the Messiah Complex era. His power is actually to disrupt any systems running – electronic, even mutant powers. He was a potential love interest for Rogue for a hot minute.

-Nice touch: Thunderbird was a marine before joining the X-Men back in the 70s.

-The other two characters Thunderbird mentioned during the breakout scene were “Randall” and “Elsa.” The only Randall I know from the X-Men universe is the one who came back in time with Bishop and died right after. And for the love of all that is holy please do not google “X-Men Elsa.” The internet is a terrible, stupid place, guys.

-I couldn’t have been the only person who got excited when Thunderbird said “Bro” on the phone, then disappointed when it turned out he was on the phone with Marcos, right?

-The guard at Sentinel Services calls in as “Lang,” but he’s probably not Steven Lang, one of the earliest Sentinel manufacturers in the comics. They wouldn’t make him a guard.

-Sage finally rocking that “Human Computer” bit telling the Resistance they have an 86.4% chance of failure. If this was a CW show, you know she would have said the odds were 3,720 to 1 against success.

-More evidence that this is actually a Morlocks show: “Harry,” the mutant who blends in with the wall as they’re trying to break Polaris and Reed out of the bus? That’s Trader from Geoff Johns’ Morlocks series.

-Polaris pulling metal out of Reed’s leg to break out of a glass cage is very X2.

-The tatoo on Pulse’s arm in the shootout looks like a wolf’s head in a sunburst. That is probably a marker of a Hound – in the comics, they were Ahab’s brainwashed mutants he used to track other mutants. In this, Garret Dillahunt’s Roderick Campbell has referred to his working relationship with Sentinel Services a couple of times.