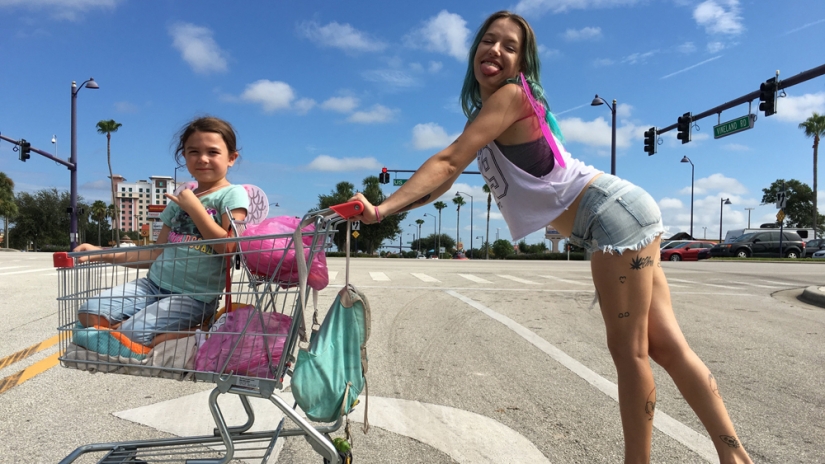 I’ve already written once about The Florida Project on this site. It was when discussing Odeon’s Screen Unseen programme, which had The Florida Project as its surprise film in October. I sat in the midst of a multiplex audience that wasn’t into the film at all, quietly breaking. I tell this story simply to enforce that I think The Florida Project is one of the most audience-splitting films I’ve seen in a long time. And I’ve seen Mother!

The film is director Sean Baker’s second movie in two years, following his iPhone-shot breakthrough, Tangerine. This time, he shoots with cameras, and takes us to the edges of the Florida tourism trade. Along a highway lined with souvenir shops, family restaurants and ice cream stalls is The Magic Castle, a tantalising sounding hotel on the internet perhaps. But as one honeymooning couple soon find, it’s not the Magic Kingdom-style luxury retreat its name may suggest. Instead, it’s a budget hotel, that’s home for a bunch of families struggling to get by.

With the spectre and shadow of Disney World never far away, Baker firstly introduces us to a bunch of young children running havoc, focusing primarily on Brooklynn Prince’s Moonee, a six year-old who is already versing herself in the ways to get an ice cream for free. Her mother, Halley, is desperately trying to make ends meet, to find the weekly rent. She’s also a desperately irresponsible parent, and although the tone of the film is generally quite upbeat, there are chilling moments as Halley tries to get by.

What Baker’s film gets across though, with the help of a stunning lead performance from Bria Vinaite as Halley, is that she’s irresponsible as much by circumstance. The glitz of the tourism industry is never far away, but the economic desperation just a ten minute drive away from the front door of the theme parks is starkly illustrated.

Baker’s film feels freeform, covering a summer in his character’s lives, and without a strict narrative path to follow. A complaint I heard on the way out of the aforementioned screening was that there was no story, that a tale never really gets told. I see the argument, although don’t necessarily side with it. I found the film continually gripping, because what Baker and his co-writer Chris Bergoch manage is to give us terrific, fully-rounded characters that you can’t help but want the best for. In the midst of the chaos of The Magic Castle is the steady hand of Willem Dafoe. He’s Bobby, the manager of the hotel who’s trying to balance getting the rent in, whilst not being emotionally blind to the tribulations of those behind the hotel’s doors.

Often very funny, by keeping the tone quite light for much of the movie, and the camera so freeform and fluid, it means when things suddenly turn, you feel them. The punches really connect here, and the film’s ability to twist its tone is very much to its credit.

By now it should be clear that The Florida Project isn’t to all tastes, but I do think it’d be a crying shame if it was resigned to just a healthy life in London art house cinemas. Baker is a really strong voice in cinema right now, and his new film is a deeply challenging, not always easy piece of work. But it’s a more welcoming one that its reputation may suggest. And it’s got some of the best acting performances you’ll see all year. Personally? I utterly loved it.

The Florida Project is in UK cinemas now.