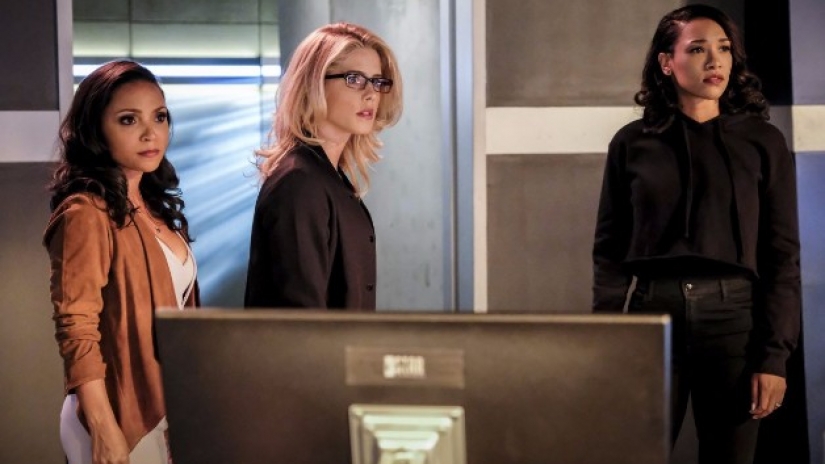 Iris and the ladies take charge in a great Killer Frost episode of The Flash. Spoilers ahead…

OK, so maybe I was wrong a few weeks ago. Girls Night Out continues the momentum of the excellent Elongated Journey Into The Night and the overall feeling is of a show settling into a more comfortable rhythm than what we had in the earlier episodes. While the jokes are still plentiful, The Flash feels slightly less self-aware, maybe a little less in-your-face with its declarations that “this is our new tone, get used to it fast!” than what I felt we had in episodes 2 and 3.

In other words, I liked this one quite a lot, too.

Aside from the other charms that Girls Night Out offers (because it really is a fun hour of TV), it illustrates just how easy it is to address some of my usual complaints. Namely, just give me a minute or two of lip service to the whole ‘Devoe’ factor, and make sure that we know that Barry knows that he is potentially in deep shit, rather than let him be happily oblivious. Tease this a little, advance it in small ways, and I’m happy to spend the rest of my time laughing at all the jokes you want to throw at me.

We get a little bit more time with Ralph Dibny this week, and it’s even more obvious this time around that he’s going to fit in perfectly with Team Flash…even if there are plenty of rough edges. With Cisco getting along so well with Harry these days (well, relatively speaking) we need another character to annoy him, and Ralph should fit the bill nicely. He’s a dick, of course, but a very different kind of dick than we’ve had in the team dynamic before, and Hartley Sawyer seems to be a genuine comedic talent. I’m all in for more Elongated Man in the coming weeks and months.

But I’m not going to spend a Girls Night Out review talking about the dudes. There’s not much reason to in an episode where Barry doesn’t even suit up (or use his powers in obvious ways) once. This episode is here to give Iris, Caitlin, and Cecile some serious screen time, with an assist from Felicity Smoak. In that regard, it’s an absolute joy.

You may remember that one of my complaints earlier this year was how easily Iris was sidelined. Iris spent the six months Barry was absent running the show with Team Flash, and then it was…straight to couples therapy? Nah, that didn’t sit right with me, and was more a symptom of how strangely the early episodes were paced. That’s corrected tonight, as we once again get a look at Iris as someone who is plenty used to giving orders and putting herself on the line. We need more of this for the rest of the year.

I guess my main gripe with this episode, though, is the same one I’ve had every week: we need to do better with these villains of the week. At least this time it’s the always brilliant Katee Sackhoff, who does her very best with Amunet Black. It’s a good thing, too, because in less capable hands, Amunet Black would be yet another meta-villain for The Flash heap of forgettable baddies, but having her facing off against Danielle Panabaker makes it worthwhile this time. The good news is that Amunet isn’t a one-and-done, and there’s room to develop the character and her relationship with Killer Frost further over the season. Hopefully they do, because it would be a shame to waste Ms. Sackhoff.

Oh, and did I mention that this is another pivotal Killer Frost episode? Once again, the way this show has handled Caitlin’s entire arc from the first season through her first flirtations with the chilly evil of her alter ego has been masterful, and this episode is no exception. I’m souring a little on the straight up ‘split personality’ nature of the Caitlin/Frost divide, which I think absolves Caitlin of too much responsibility and thus softens the conflict. Maybe they’ll find a way to walk some of this back. In any case, Ms. Panabaker, like Carlos Valdes, is a not-so-secret weapon of this show, and if things ever go irreparably bad for her (I wonder if The Flash will ever have the guts to do that) it’s going to be like a knife to the chest. It’s impossible to imagine this show without her, and seeing how the dynamics of Team Flash have had to reset around her new situation is really great stuff.

I feel like I’m doing this episode a disservice, writing such a straight-faced review of another genuinely funny episode that elevates it supporting characters so well. But I think that’s just another sign of how good it is and how, even despite my occasional griping, just how good the show has been overall. Girls Night Out doesn’t feel like a side quest or a bottle episode at all, which says a lot about the tremendous foundation that has been laid for all of these characters, even the relatively (compared to Iris, Caitlin, or Felicity) underused Cecile. Did you miss the superheroics? I sure didn’t.

Read Mike’s review of the previous episode, Elongated Journey Into The Night, here.