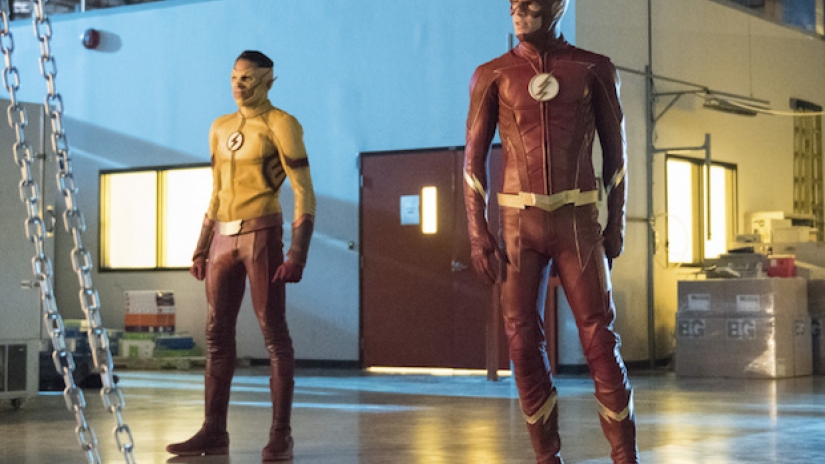 Mixed Signals gets by on charm, but not much else, and we expect better from The Flash. Spoilers ahead in our review…

I don’t know about this one, folks. I know that Mixed Signals was supposed to serve as the true reset after the understandable weirdness of getting Barry out of the Speed Force in the season premiere. And I get that the showrunners want to send a message loud and clear about this season’s new, lighter tone to help kind of wash away any lingering negativity from how intense season three was (disclosure: I didn’t have a problem with it). But was it me, or did Mixed Signals just feel really forced?

I don’t want to be the one pissing in the punch bowl, and to be sure, I did get quite a few laughs out of the episode. But I feel like this isn’t the kind of thing you need to do two episodes in. As weird as it sounds when we’re talking about a cast that has earned so much goodwill over the last three years, but considering how much they rushed Barry’s return to normal last week, it didn’t feel like they had exactly earned an episode this light yet.

Don’t get me wrong, I’m not advocating a return to the dark, melodramatic elements of last season, nor do I think they need to dive right into another endlessly serialised storyline this early into season four. But after rushing Barry’s return and sweeping most of the potential consequences under the rug one week, going full Legends Of Tomorrow (which I love, so there’s nothing inherently wrong with that) might not have been the best move. If some of these other issues had been dealt with, or if this was a quick break after two or three episodes of reset, things would have unfolded a little more naturally.

I get that the whole ‘couples therapy’ thing had been teased early on, and I have to say, I got my biggest laugh out of the Doctor telling a superhero that “there’s no right or wrong.” But again, did this really do Iris as a character any favours? Iris had a long road over the last two seasons, and it was so good to see her grow out of ‘the girlfriend’ or ‘the one who everybody lies to’ but to have her pushing Barry, who has been out of the Speed Force a whole week, into therapy in order for her to do the whole ‘you left me’ thing feels like a huge regression, especially since she’s been the one running the operation the last few months. They could have gotten away with this, and that moment would have meant much more, if everyone had a few weeks to process Barry’s return and his new attitude.

And that’s the other thing, we need to talk about Barry’s attitude. It’s great that he has finally come to terms with his past, and left much of the emotional baggage of the last three seasons in the Speed Force. It’s the natural outcome of his decision at the end of last season. But history tells us that any time Barry is this happy-go-lucky, bad things are on the horizon, and we already know that the mysterious DeVoe is going to do serious personal harm to Barry in ways we don’t yet understand. Still, Barry’s over-the-top easygoing routine feels like something we’ve seen before, and they’re just telegraphing a big fall later on.

Added to all of this was the only moderately inventive use of Kilgore as the villain of the week over a story that, if you took the superheroics and living techno-virus aspect out of it would have played out like a CBS procedural. While historically, this would have been fine when you’re using the larger part of the episode to make a point (in this case, the emphasis on humour, the show’s new tone, etc), this time it just added to the uneven feeling of the episode.

I’m sure lots of you will feel differently, and I won’t say I wasn’t entertained. But Mixed Signals coasts by on charm and little else, and I have come to expect a little bit more from The Flash.