The Evil Within 2 review 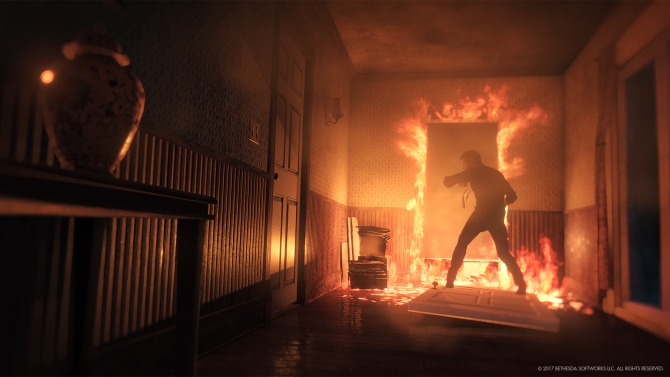 An improvement over the original, but is The Evil Within 2 a great survival horror? Here's our review…

The original Evil Within turned out to be little more than a re-skinned Resident Evil 4, but it wasn’t without its charms. The game was oozing in classic horror atmosphere, its story showed promise, and it was scary in an “I didn’t expect that hallway to play host to so many wall spikes” kind of way.

Still, it was also a mechanically dull title that suffered from the fact that Resident Evil 4’s gameplay innovations occurred 10 years before its release. After an exciting opening sequence, the game forced players to succumb to several hours of awkward shooter gameplay spiced with a few pedestrian puzzles and forgettable boss fights.

You would think, then, that The Evil Within 2 might take the aspects of the first game that worked and simply change the rest. You’d be right, but accepting that philosophy does little to prepare you for just how different The Evil Within 2 feels in comparison to its predecessor.

Speaking of predecessors, let it be known that you don’t need to play through The Evil Within to have a clue what’s happening in The Evil Within 2. Yes, the sequel’s story picks up where the last one left off – former detective Sebastian Castellanos is searching for any clues which suggest his daughter is still alive – but aside from a few winks and nods, the sequel does a good job of not making new players feel like they’re staring at a test they didn’t study for whilst only wearing their underwear.

Unfortunately, the presentation of the sequel’s story is about as awkward as that classic dream scenario. Evil Within 2’s major story beats do work well. Revelations abound in this downright weird mystery involving science experiments, multiple dimensions, and a father’s unwavering love. These milestone moments do a good job of upping the ante and advancing the narrative. By the end of the game, you’ll be able to relay an entertaining version of the story you experienced.

The problem is that The Evil Within 2’s moment-to-moment storytelling is quite bad. That’s especially true of the game’s downright awful voice acting. Actually, the voice acting here is so bad that you’re left to conclude it’s a throwback to the days of laughably bad PS1 survival horror dialog. Maybe it is, but that does little to make the experience of enduring that dialog any more enjoyable.

It certainly doesn’t help that the game’s characters don’t rise beyond the level of cliche. From the gruff protagonist – he has a drinking problem, don’t you know – to mad doctors, most of Evil Within 2’s primary players serve as vehicles for the game’s uneven dialog.

Having said all of that, there is an undeniable charm to the game’s weirdness. It’s not quite on the level of Deadly Premonition in that it’s not as evident that the developers were going for a “So bad, it’s good” vibe, but Evil Within 2 does occasionally flirt with the lovable territory of B-grade cinematic entertainment. This is especially true of the game’s bizarre Easter eggs, such as the collection of toy items spread throughout the game all taken from Bethesda properties.

Ironically, The Evil Within 2’s biggest storytelling faults can be attributed to its greatest gameplay improvement over the original title; its large-world setting.

The Evil Within 2 isn’t exactly an open-world title, but compared to many horror games, it does afford the player quite a bit of room to roam. That extra space plays host to plenty of items, side-quests, and optional enemy encounters.

The side-quests themselves don’t do much more than pad the length of the game by an additional four or five hours (the main story will take you about 10-12 hours to complete based on the difficulty level). They primarily consist of fetch quests and creature removal tasks that occasionally expand upon the game’s story in a meaningful way. Actually, the fact that the player doesn’t have to follow a set-path tends to hinder the pacing of the game’s story more than these side-quests help it.

Evil Within 2’s scavenging aspect, however, is a wonderful addition to the original game and the modern survival horror genre in general. This is far from the first survival horror game to incorporate scavenging mechanics, but The Evil Within 2 forces you to weigh the benefits and hazards of your scrounging. Do you brave that area patrolled by a particularly hazardous creature in the hopes of finding spare ammunition? You may think its always worth the risk considering that you can just restart from one of the game’s save room checkpoints, but in practice, it truly is sometimes better to let sleeping demons lie.

That predicament is made all the more complicated by the game’s surprisingly challenging combat. There are guns in The Evil Within 2, but most of the basic enemy combat consists of sneaking around creatures and taking them down via stealth attacks. It’s highly-reminiscent of The Last of Us in that respect, though the game’s scavenging and crafting mechanics are much deeper than they were in Naughty Dog’s masterpiece.

In theory, that’s a good thing, but the problem is that The Evil Within 2’s crafting mechanics and character skill tree system are almost too deep. There comes a point when you no longer really have to concern yourself with finding that one perfect item. Instead, you’re usually able to craft what you need when you need it or rely on your base character skills. The story does begin to gain steam at that point, but it doesn’t make up for the loss of the initially exciting gameplay. Still, at a time when most horror games rely on making the player feel as vulnerable as possible, there’s something to be said for the way The Evil Within 2 allows you to  best most bad situations – you can be overwhelmed by mobs quite easily – so long as you approach them in a sensible way. While I still cite Dead Space as the prime example of balancing resource management with action, The Evil Within 2’s upbeat gameplay will appeal to those fans of horror gaming who wish they could do more than run at the first sign of trouble.

It’s that quality which makes The Evil Within 2 such a difficult game to judge from a “Buy or don’t buy? perspective. With the exception of its incredible open areas and accompanying scavenging system, everything in this game is marred by some kind of design inconsistency. It’s a lot like the first Evil Within in that respect. Yes, this sequel is a clear improvement over the original in almost every respect, but it’s still a game that forces you to wade through some unfortunate design decisions if you’re going to make it to the next great moment.

However, even The Evil Within 2’s flaws feel fresh in that they were acquired in the pursuit of making a AAA horror game that eschews popular current trends. With any luck, The Evil Within 2 will inspire other developers to pursue the creations of horror experiences in-line with classics such as The Suffering and Dead Space. Games that allow the patient and persistence player to combat evil so long as they are prepared to deal with the consequences.

The Evil Within 2 is the easiest rental recommendation I’ll make in 2017. The things it does well are worth experiencing. Unfortunately, it’s a sequel that ultimately left me uttering the same sentiment that the original title inspired: “Man, I hope this game gets a sequel so that the developers have another chance to get this right.”

Evil Within
The Evil Within 2
gaming
game review
Review