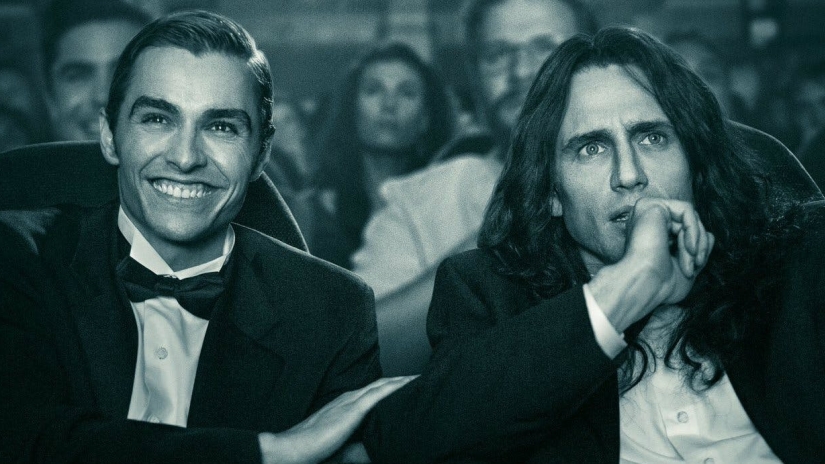 A great comedy about one of the worst films of all time? James Franco directs and stars in The Disaster Artist…

With The Room, writer, director, producer and actor Tommy Wiseau joined Ed Wood and Herschell Gordon Lewis as one of America’s most stunningly inept filmmakers.

See related
The Disaster Artist: My Life Inside The Room review

On paper, The Room is a soapy drama about a well-to-do guy – Johnny, played by Wiseau – whose life is ruined by his two-timing wife, Lisa. In practice, the film looks like something beamed in from another dimension: nobody in their right minds would have cast Wiseau – tall, pale, with lank black hair like a fading stadium rocker’s – as a wealthy San Francisco banker. No other filmmaker would write lines like the infamous “I did not hit her! I did not! Oh, hi Mark”, much less film them on such a visibly shoddy set. But this is reality, filtered through Wiseau’s perspective – and for better or for worse (really, mostly for worse) his take on modern American life is unlike any other filmmaker’s, living or dead.

Which brings us to The Disaster Artist, a dramatic-comic account of how Wiseau and his best friend, struggling actor Greg Sestero, came to make one of the most notorious films of the early 20th century. James Franco directs and stars as Wiseau, adapting Sestero and Tom Bissell’s book of the same name, which details how Sestero, a 20 year-old wannabe star, wound up in this incredibly eccentric man’s orbit.

In the movie, Dave Franco plays Greg, a handsome occasional model whose ambition and nice-guy earnestness makes up for his tentative early attempts at acting. When Greg first sees Tommy during an acting class, yelling and tearing up the stage, he’s visibly startled. Unlike Greg, Tommy isn’t self-conscious in the slightest. And what’s that strange accent? French? Polish?

Fascinated by Tommy’s off-kilter charisma, Greg makes a beeline for him, and the two become friends – united in their desire to become Hollywood stars. Unfortunately, Tommy’s lack of self-awareness is as much a curse as a blessing: he’s fearless while performing (even if it’s in a crowded diner), but also clueless when it comes to engaging with powerful Hollywood producers (Judd Apatow plays one such producer in a toe-curling restaurant scene). Still, Wiseau has something else in his favour: a seemingly bottomless reservoir of cash. So when Greg and Tommy find themselves unable to find acting work – after months of sharing a flat and going to casting calls – Tommy decides to make a movie of his own.

The rest of the movie follows Wiseau’s flailing attempts to become an auteur, with Greg initially his smiling cheerleader and muse. Entire scenes from the real Wiseau’s movie are restaged, with such actors as Seth Rogen, Jacki Weaver and Zac Efron filling out the cast and crew. These sequences are The Disaster Artist’s funniest and most engaging, and it’s clear that all involved enjoyed recreating them.

It’s debatable, however, whether The Disaster Artist ever succeeds at much more than an amusing re-enactment of a bizarre moment in cinema history. Franco is entertaining as Wiseau, but only in the same way that, say, a Saturday Night Live comedian is at impersonating a Hollywood star or head of state. The lank hair and awkward mannerisms are present and correct, but Franco’s Wiseau feels like a caricature rather than a real human being; the film itself does little to give the sense that Wiseau has much of a past beyond his time in California – an old photo of a young Tommy in front of the Eiffel Tower is as close as we get.

While it’s true that Wiseau’s secretive nature makes him somewhat unknowable, the original book gave us far more insight into what Wiseau was like when he wasn’t making his dreadful money-pit of a movie. The Disaster Artist has a few moments of pathos – an acting coach played by Bob Odenkirk smirking at Wiseau’s ineptitude in front of a crowded theatre, for example – but the movie otherwise fails to dig below the surface of a curious and fascinating character.

There’s a certain irony, too, that a movie about a badly-made film lacks the craft of, say, Tim Burton’s Ed Wood – another film about a wonderfully inept director – though it just about gets the job done in terms of cinematography and editing.

It’s as a feel-good comedy, meanwhile, that The Disaster Artist ultimately succeeds; there’s something incredibly endearing about Greg and Tommy, two clueless dreamers who, almost in spite of themselves, create a one-off work of art. The original book gives the pair more depth; the film, at least, captures their charm.

The Disaster Artist is out in UK cinemas on the 6th December.