The Death Of Stalin review 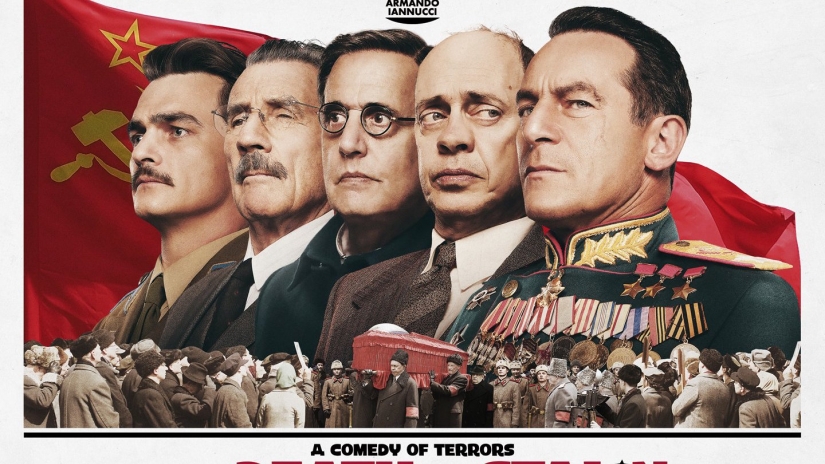 Armando Iannucci serves up superb satire once again, with his rib-tickling Russian jaunt, The Death Of Stalin…

Modern day politics has become so ridiculous that it’s practically beyond parody, which presents a unique challenge for celebrated satirist Armando Iannucci. The political problems of Malcolm Tucker and Selina Meyer seem somewhat quaint now, compared to the grim reality of current affairs around the globe. But, thankfully, Iannucci has found the perfect workaround: instead of attempting the tricky task of ridiculing Trump or Theresa, he’s opted to travel back in time and remind us that shambolic stupidity is nothing new in politics.

The Death Of Stalin centres on – spoiler alert – the death of Joseph Stalin. The film opens shortly before the dictator’s demise in 1953, finding the funny in a regime where pissing off the wrong person means getting your name promptly put on a death list. Paddy Considine and Tom Brooke (Wiggy from Sherlock) sizzle in a rib-tickling opening sequence that subverts this bloody backdrop with some terrifically mundane humour. It feels like a workplace sitcom spliced with the constant fear of death, in the best possible way.

Leaving you wanting more from this pair of ordinary folk caught up in Stalin’s web, Iannucci transitions from the ground level right to the top. Steve Buscemi makes an instant impression as Khrushchev, who arrives in the film halfway through a highly blood-spattered anecdote. Iannucci has a masterful way of cutting to the core of a character quickly, and he clearly had fun with these opening exchanges.

Alongside Buscemi, the core cast consists of Jeffrey Tambor’s Malenkov, Michael Palin’s Molotov, and Simon Russell Beales’s Beria. As Stalin’s inner circle, they must find a way to move forward without their beloved leader. It would spoil the fun to get into who aligns with who, but suffice it to say that everyone in the ensemble puts in a very strong shift. Iannucci’s script is a marvel, but the film could’ve easily lost its way without the right cast acting it out. This lot are all perfect choices, though, and their chemistry clicks fantastically.

Anyone could’ve guessed that the dialogue scenes are brilliant and chuckle-inducing in The Death Of Stalin, but the movie’s excellent physical comedy is very welcome too. You might not expect there to be room for it, but Iannucci finds space for a handful of truly hilarious verging-on-slapstick moments. These instances emerge out of nowhere, and garner huge laughs. Again, it wouldn’t be fair to spoil the contents of these scenes, but you’ll know the bits I mean when you get to them.

Also peppered throughout the film are terrific little supporting roles. Just when the pace threatens to sag, Iannucci chucks in another ridiculous character, played by another stellar performer, who’s clearly having the time of their life taking part in this whimsical spin on history. Rupert Friend steals the show a couple of times, with his drunken Vasily Stalin (son of Joseph) flitting between rage and nonsensicalness on the regular.

Jason Isaacs has a similar effect as the army boss and World War II hero Zhukov. His inexplicable Yorkshire accent will raise a wry smile. His delivery of outrageous lines will have you laughing. And his more physical moments are also a lot of fun. It takes him a good long time to appear in the film, making the trailers and posters seem a bit misleading, but the injection of Isaacs – when it does arrive – gives the film a real shot of adrenalin.

Olga Kurylenko’s Maria Yudina and Andrea Riseborough’s Svetlana Stalina are both forced to play it quite straight. While the male cast are peacocking and having fun (Tambor, Buscemi, Palin, Isaacs and Friend all look to be having a ball), their female counterparts are left to look on, angrily or sadly, from the sidelines. You could lay the blame for this flaw on history itself, of course. It is noticeable watching the film, though.

Speaking of history, this is the sort of film that will have you leaving the cinema and going straight onto Google. A running gag about a hockey team seems too strange to possibly be true, but apparently it is, which somehow makes the film’s version even funnier. There’s an actual history lesson to be had here, then, alongside the sizeable barrel of laughs.

The Death of Stalin is a master class of comic writing, directing and performing. The gags come thick and fast, and their hit-rate is immensely impressive. Fans of Iannucci’s oeuvre will not leave disappointed (there are plentiful creative insults), and those who aren’t aware of his prior works will still find a lot to enjoy – whether they’re into vicious banter, sudden slapstick, or absurdist silliness.

Our tip to you? Don’t miss the chance to see this film with an audience – it’s a fun experience to share, and the laughter is bound to be infectious. And who doesn’t need a laugh at the moment?

The Death Of Stalin is in UK cinemas from Friday.