The Bottom Shelf: Return Of The Living Dead 3, The Evil Within and The Jerk, Too 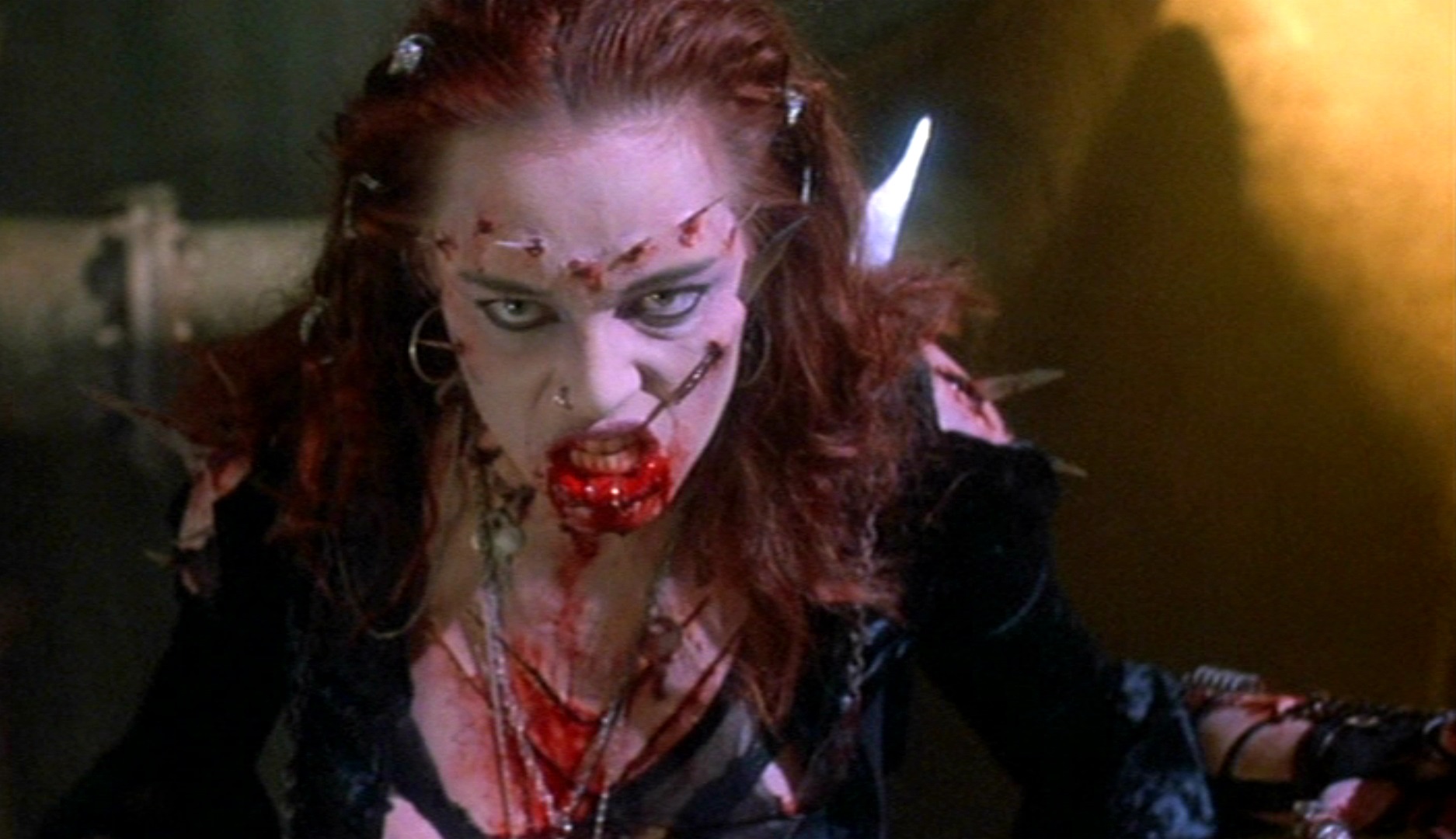 Our round up of horror and genre DVDs and Blu-rays returns, with some solid titles, and The Jerk sequel…

So, whilst Kim Jong-Un and Donald Trump are comparing the size of their nuclear weapons and super-storms are battering the world’s coastlines, the head of NATO is describing the present moment as the “most dangerous in a generation”. With any luck, the inevitable apocalypse may bring with it some fun real-life zombie larks to bring some light to the fast-approaching nuclear winter: what more prescient documentary-drama could there be, therefore, than Re-Animator cult hero Brian Yuzna’s Return Of The Living Dead 3?

Resurrected this month on Blu-ray as part of the gloriously tacky Vestron Video Collection, the second sequel to Dan O’Bannon’s classic eighties comedy horror adopts more of an angsty nineties tone as the monster-making Trioxin chemical returns to cause havoc all over again, with side effects this time including self harm and body-piercing. More (kind of) romantic than previous instalments, Yuzna’s film follows young rebel Curt (J. Trevor Edmonds), whose young rebel dickishness leads to a motorbike crash that kills his girlfriend Julie (The O.C‘s Melinda Clarke in an early role). Conveniently, Curt’s dad is an army bigwig who works in an experimental facility looking a little like Lowestoft seafront, which means Curt can sneak in and raise Julie from the dead. Turns out Julie gets a little peckish as things get out of hand and the series’ penchant for very cool outlandish effects takes over once again, with Society-style undead-melted-together-like-so-many-Lion-bars-left-out-in-the-sun and infected spinal column (not in a bap) marauders the order of the day.

Yuzna, behind the wheel, puts in some sterling work, though the whole slightly moving tale of young love in splatter-movie chaos could have done with a heap more tongue-in-cheek lunacy for good measure. Hellraiser 3 director Anthony Hickox makes a brief cameo as a government scientist, which leads us neatly to this month’s other Vestron release, Hickox’s own 1988 cheese-ride, the ridiculous Waxwork on Bluray. In terms of the general pantheon of wax-based horror, Hickox’s film is probably somewhere near the top of that particular championship table, between the likes of the original House Of Wax and the sadly now-defunct Louis Tussauds’ terrible tourist attraction in Great Yarmouth. The ever-present (at least in these films and Star Trek) David Warner is our Willy Wonkaesque shifty curator who invites a group of waspy rich kids along to his museum to definitely not get killed gruesomely and turned into exhibits.

This group consists of our slightly less hateable hero, Gremlins‘ Zach Galligan, a pre-Twin Peaks Dana Ashbrook and Valley Girl’s Deborah Foreman, amongst others, who encounter the likes of Gimli from Lord Of The Rings as an unsurprising werewolf and rubbish Tarzan Miles O’Keefe as a just-as-unsurprising rubbish Count Dracula. Throw in a sinister butler, nicely gaudy high definition deaths and Patrick McNee as the exposition-meister Sir Wilfred (who jabbers on at length about Satan and the standard ‘chosen one’ gubbins), and you have the makings of a great light-hearted violent romp.

Somehow not one of the classic movie monsters making an appearance in Waxwork is Dr Cyclops, King Kong director Ernest Schoedsack’s 1940 pulp sci-fi adaptation, out now on DVD, and largely (some might say rightly) forgotten. With Dr Cyclops being the sort of name more widely associated with a hipster optician or a firstborn, sadly Schoedsack’s mildly intriguing movie never quite lives up to that potential. Our titular scientist, played by the seven-years blacklisted McCarthy critic Albert Dekker, summons a few less talented colleagues to his mysterious camp in the Peruvian jungle to help with his shrink-ray experiments (never a wise invitation to accept). Clearly mad as a box of poison dart frogs, said colleagues want to drag our visually-impaired fruit-loop back to civilisation for the relevant psychiatric help, and the inevitable foray into sub-Land Of The Giants territory takes place as he refuses.

This means our tiny heroes get to work. Our female scientist (Janice Logan) correctly dedicates herself to tiny sewing whilst the Latin American assistant runs around wearing what looks like a nappy as the toga-clad white males (no nappies for them, again correctly) encounter the kind of jungle critters that would be dangerous to full-sized peeps, let alone Lego-sized ones. No Honey I Shrunk The Kids style giant ants here then (just big cats), for shame, and the overall feeling is just odd. For a sci-fi horror about a mad scientist shrinking animals with radioactive ore, the whole affair is bizarrely sober and stilted.

That charge surely can’t be levelled at our next release, the sinister found footage horror Capture. Kill. Release, out on DVD, which follows a young U.S couple as they make plans to murder a stranger. Before you very reasonably baulk at the ‘found-footage’ tag, writer/director Nick McAnulty imbues his film with an overwhelming sense of just how normal everything is as our very believable psychopath Jennifer (Jennifer Fraser) and less enthusiastic Farhang (Farhang Gajhar) go weapon shopping and befriending homeless drifters. Far more accomplished than most films of this type, McAnulty’s clever use of realism to depict distinctly unreal situations is a highly effective, disturbing depiction of the ‘banality of evil’, even if there remains that eternal screaming irritation at characters’ refusal to ever turn off the camcorder throughout.

Not even approaching anything like realism is, up next, the first and last film from the late director and heir to the Getty billions, Andrew Getty, and the memorable The Evil Within, out this month on Blu-ray and DVD. Having taken fifteen years to gestate as the reputed crystal meth addict Getty tinkered with every last frame until satisfied at perfection, the story behind The Evil Within is about as fascinating as the Lynchian shroud enveloping the movie. Getty, an amateur film-maker with a great passion and deep pockets freeing him from studio backing and interference, based much of his film on actual (meth-addled or not) dreams, presented here as the fucked visions of our learning-disabled protagonist Dennis, played somewhere between really well and really badly (the jury’s out on this) by Criminal Minds star Frederick Koehler. Creative filming and editing techniques (that don’t always quite work), from skilful use of green screen through to stop-motion animation, render Dennis’ internal world a disturbing landscape populated by cruel and unusual entities that are never less than intriguing, and always distinctive.

As Dennis’ thoughts turn darker and his inner evildoer (played by The Hills Have Eyes cult icon Michael Berryman) eggs him on to ever-worsening acts, all presented with endearingly straight earnestness from Getty, the end result is a curious mixture of Clive Barker and Tommy Wiseau. Sledgehammer-subtle though none-the-worse for it, The Evil Within offers a compelling, if flawed, legacy for its ambitious creator.

We finish this month’s trawl by going from one mentally… different protagonist to another, in the form of Mark Blankfield, taking over from the great Steve Martin as Navin Johnson in the just awful made-for-TV 1984 sequel to The Jerk, The Jerk, Too (geddit?), getting an unasked-for DVD release and bringing shame on everyone involved. Basically retelling the same story as in Martin’s 1979 comedy classic about a simple white boy raised by a black family who goes out into the open world, but repackaged as an extended pilot episode for a proposed but (thank Christ) abandoned TV spin-off, the viewer is treated to endless badly-put together slapstick, Z-list guest appearances and cartoonish skits that never fail to raise a grimace. With previous Larry David collaborator Blankfield, we have the lovechild of Jar-Jar Binks and Andy Samberg, whose good natured manner and physical buffoonery (think Sherlock Bones once again, if you will) see him through countless attempts at treachery. Scrapes include our hero being tasked to wipe a bull’s snotty nose with a red handkerchief (you can imagine the japes that would follow) and piloting a hot air balloon, skilfully dodging any intentional laughter every step of the way. The obvious descendant being that other mirthless climb, Dumb And Dumber To, The Jerk, Too is worth a viewing for the morbid or those who simply couldn’t believe they made a sequel.