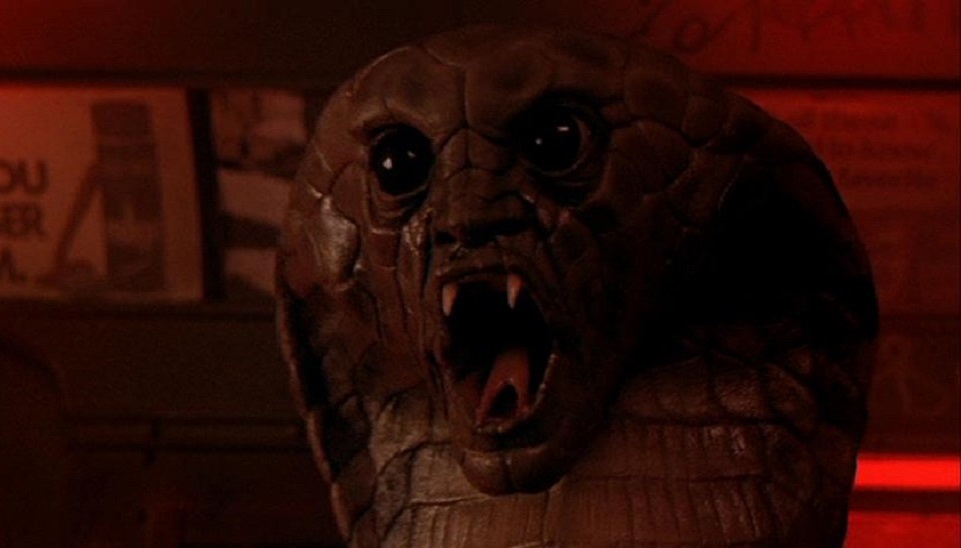 So: with season two of Stranger Things fast approaching, a remake of Stephen King’s It set to mildly trouble a whole new generation and, erm, the on-going threat of nuclear armageddon, it seems everything eighties is ‘in’ at the moment. And, you know what? That surely must include Dennis Quaid, right? Well, maybe not, unless you count this year’s canine reincarnation/multiple hound-homicide horror A Dog’s Purpose, which we don’t in these parts. Anyway, Quaid’s back in Blu-ray form with the recent repackaging of his 1984 quirky fantasy thriller Dreamscape.

Nicely sandwiched between the release of Jaws 3-D and Enemy Mine, surely two of the most Quaidessential (sorry) films of the decade, Dreamscape sees our hero take on the mantle of a cheaper Harrison Ford, burdened with psychic powers that he must use to literally step into the dreams of the president (Eddie Albert) to stop aforementioned nuclear armaggedon in its tracks. Warmongering spook Christopher Plummer (who could tell he’d be dodgy?) wants Pres to go all Trump on America’s enemies, whilst Norm From Cheers somehow turns up as a journalist who knows all about Plummer’s naughty experiments. The Stepfather writer-director duo David Loughery and Joseph Ruben combine powers effectively here for a weird but somehow compelling mish-mash of Scanners-style dystopian paranoia and Inception/Flatliners dream adventure. Throw in a great woozy/porny synth score from Maurice Jarre, trademark wise elder performance from Max Von Sydow and Twin Peaks’ David Patrick Kelly as an evil-faced-cobra-man-dickhead and you have the makings of a minor not-quite classic.

Taking a more straightforwardly camp step into the subconscious, up next, we have Indicator’s glittering, extras-packed Bluray release of Dr Seuss’ almost irredeemably flawed but endlessly fascinating fifties musical monstrosity The 5,000 Fingers Of Dr. T, which kind of has to be seen to be believed. With studio tampering from big-name producer Stanley Kramer (half the original 24 songs were cut) and an unappreciative audience to contend with, this box-office bomb and critical failure tells the tale of hapless young student Bart (Tommy Retig) who dreams of battling his dictatorial piano tutor Dr Terwilliker (a rubber-faced Hans Conried; think Dr Zachary Smith in Lost In Space, all flared nostrils/arched eyebrows). Young Bart (he and Terwilliker were the inspiration for the Bart Simpson/’Sideshow’ Bob Terwilliger rivalry) imagines a kind of Oz world, where he, with the aid of his surrogate father/local plumber Peter Lind Hayes (we all know what’s going on with the plumber visiting Bart’s mother so often), leads a rebellion of young boys forced to practice piano by Dr T (hence the 5000 fingers). Cue cool/shaky Technicolor expressionist set design, downright strange song-and-dance numbers involving burley, overweight Oompa-Loompas and a derelict orchestra, and a scenery-chewing Conried doing their best to overcome perhaps the most indulgent of Dr Seuss idiosyncrasies.

Now, from 5000 (hopefully not severed) fingers, down to 1000 dead bodies, and industrial metaller turned grindhouse director Rob Zombie’s 2003 debut, House Of 1000 Corpses, reissued by Fabulous Films on DVD. A bit like that annoying friend who purely likes films for their tits, gore and ‘cult figure’ content (there is more to life than that), the Hellbilly Deluxe’s directing bow ticks all of those boxes, with Blaxploitation favourite Sid Haig as a killer clown, Invaders From Mars/The Rollerblade Seven star Karen Black summoning her inner redneck, and more tits and gore than you could, ahem, shake a stick at. Still, Zombie does craft something a little different with this tale of road-trippers and cops (young Rainn Wilson and Walton Goggins both make early appearances) who stumble toward their deaths, evoking a kind of gonzo torture-porn atmosphere as characters with names like Dr Satan lurk about doing imaginatively nasty things to people and circus sideshow cruelty mounts up. A great metal-blues score from Zombie himself adds to the feeling of messed-up bloody delirium as this brutal trip stays just the right side of self-conscious.

Positively dripping in eyebrow-raised self-awareness, though, is ‘Allo ‘Allo creator Jeremy Lloyd’s 1976 bloodsucking comedy Vampira, also out on Fabulous Films DVD. A characteristically suave David Niven utters the sort of dodgy innuendo you might have heard in Are You Being Served (lines such as “My word, what a splendid pair of jugulars” abound), as an aged Count Dracula, reduced to hosting guided tours of his castle to make ends meet as he simultaneously tries to resurrect his dead lover. Questionable (read: WTF) use of black-face and really unfunny one-liners aside, Vampira’s worth watching just for the spectacle of David Niven as a randy vamp trying it on with Playboy bunnies in true dated sitcom style. Whilst on the subject, the far more successful vampire, Blade, makes a welcome return to the small screen this month, with the straight-to-DVD release of alien invasion saga Final (definitely not Total) Recall. Alright, Wesley Snipes doesn’t actually play the famed bloodsucker in Mauro Borelli’s production, though his astronaut-turned-survivalist-turned-alien-hunter might as well be. Breaking Bad’s RJ Mitte and his friends unsurprisingly stumble upon Snipes’ cabin in the woods (seriously; prosecution for breaking and entering is no deterrent for these American teens) as the Independence Day jellyfish E.Ts cause all sorts of problems. The Pirates Of The Caribbean art department veteran Borelli imbues his film with decent production values as Snipes sleepwalks his way toward stealing the show.

We finish this round-up with the unheralded but essential Blu-ray release of David Irving’s (not the Holocaust-denying historian, we can only assume) 1989 sequel to the subterranean mutant extravaganza, C.H.U.D., the plain ridiculous C.H.U.D 2: Bud The C.H.U.D. Eschewing the original movie’s perhaps too serious tone in favour of an out-and-out comedy horror treatment, C.H.U.D. 2 finds two students in something of a predicament as they accidentally lose a medical study corpse (the titular Bud, on a trolley, down a steep hill, no less) that just so happens to also be a kind of zombie, thanks to government chemical poltroonery. C.H.U.D stands for Cannibalistic Humanoid Underground Dweller, so as Bud goes on his obligatory killing spree, many local townsfolk are infected, making way for much sub-Return Of The Living Dead gore-comedy, Sherlock Bones-level slapstick (check it out, it really must be seen, by the way) and enjoyably stupid Weekend At Bernie’s disguised-corpse-handling mishaps. The addition of deadpan military man Murray Hamilton Robert Vaughan evokes memories of the great William Shatner in Airplane 2 as the only cast member without their tongue firmly in cheek is our Ted Raimi-esque slathering cannibal antihero Bud in this gloriously silly sequel.