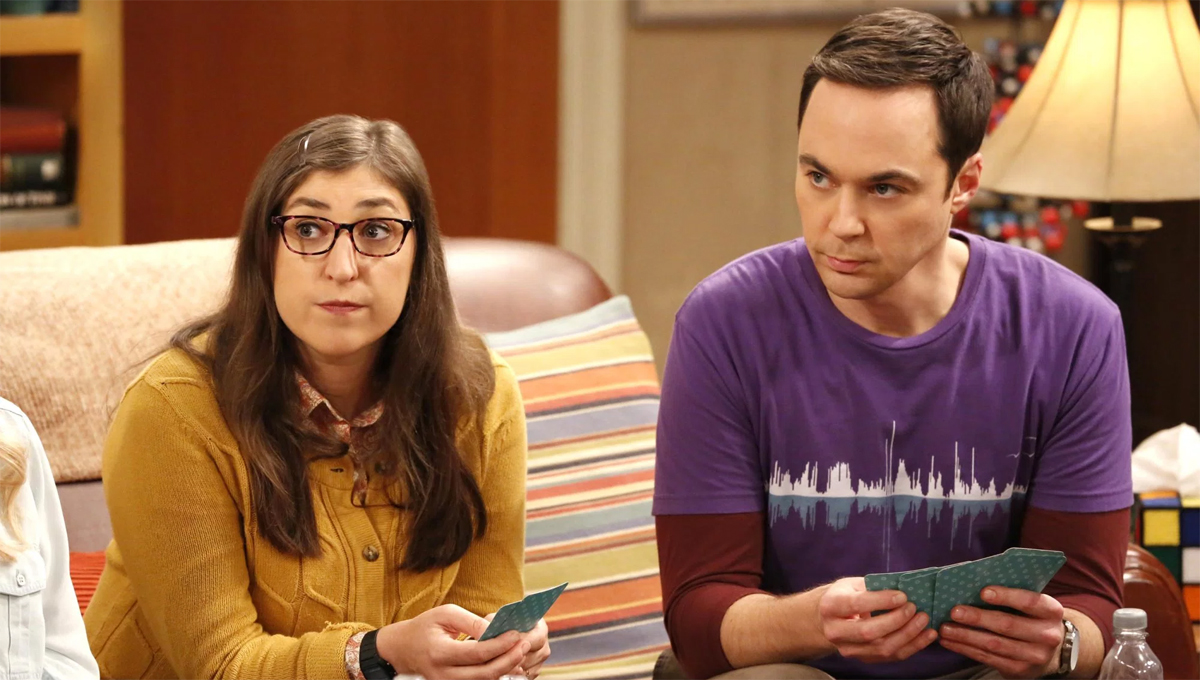 This week's episode of The Sheldon Show is pretty funny, it's a shame the same can't be said for Raj and Stuart's overfamiliar storyline…

Sheldon Cooper is many things, but he’s never been a guy you’d catch dead saying “whatevs”.

Nah, that will never happen, but The Relaxation Integration poses the question anyway. When Amy starts to notice her fiance is talking in his sleep, pondering the interesting conversations he could have with a hitchhiker or what it would be like to befriend a seagull, she worries that the pressure of organising the perfect wedding might be getting to him.

The point of conflict this week is that he can’t find the perfect wedding date, whether because of the death of a beloved celebrity or the fact that everyone would be partied out after flag day. When Leonard suggests tying the knot at Comic-Con, the girls shut it down immediately.

As Penny says to Amy – an actual neuroscientist who ponders this for days because the narrative demands it – dreams can be a way for us to imagine we’re different people with different lives and, for Sheldon, being relaxed is as different as it gets.

But this obviously freaks him out, because acknowledging unknown facets to your personality is one step away from Jekyll and Hyde territory. After all, Dr Jekyll’s split personality didn’t even have a doctorate – the horror!

Nevertheless, after a quick catch-up with Penny in the laundry room (on a Wednesday night instead of a Saturday, the surest sign he’s evolving), he decides to experiment with something small he wouldn’t normally do. Project flip flops begins.

What follows is an actually very amusing tale of mishap, a damp toupee, warm apple juice and a melted chocolate bar – lies Sheldon is telling himself to avoid facing the incredibly icky truth. Realising that sunscreen would be needed if the tops of his feet were uncovered, one shoe slips off and into a drain, and the other is desecrated by the aforementioned substances.

Jim Parsons is great in this scene, especially in the defeated way he responds to Amy’s wish for a cliff-edge, sunset June wedding. That’s fine, he sighs, as long as he can wear a Star Trek uniform under his tuxedo.

While the ‘Sheldon Show’ is more entertaining than it’s been in a while, the same can’t be said for the ‘Raj and Stuart Are So, So Lonely’ show. When Bernadette mentions to Howard that she has a new single, female colleague eager to make friends, he immediately tells Raj and Stuart where to find her. Once there, they proceed to ‘charm’ her with thinly-veiled insults aimed at each other – insults we’ve heard a million times before.

It’s not just the familiarity of the lazy dialogue – Raj used to live off his parents’ money, Stuart is homeless and works at a struggling comic book store – but the whole situation. I’m not willing to go back and look at every episode of the show, but I could swear this exact scenario has happened before.

The show is coming under fire more and more for its treatment of women and its excusing of toxic male behaviour, and it deserves all of the pushback it’s received. While this episode at least had the courtesy to have the lady in question reject both of them fully in possession of her agency, the scene still ends with Stuart attempting to set himself up as the friend before growing on her ‘like a fungus’.

That aside, which may feel more objectionable because of the year we’re having, it’s just boring and repetitive, and I wish that someone in the writers room could come up with something new for the two characters – both portrayed by talented comedic actors – to do.