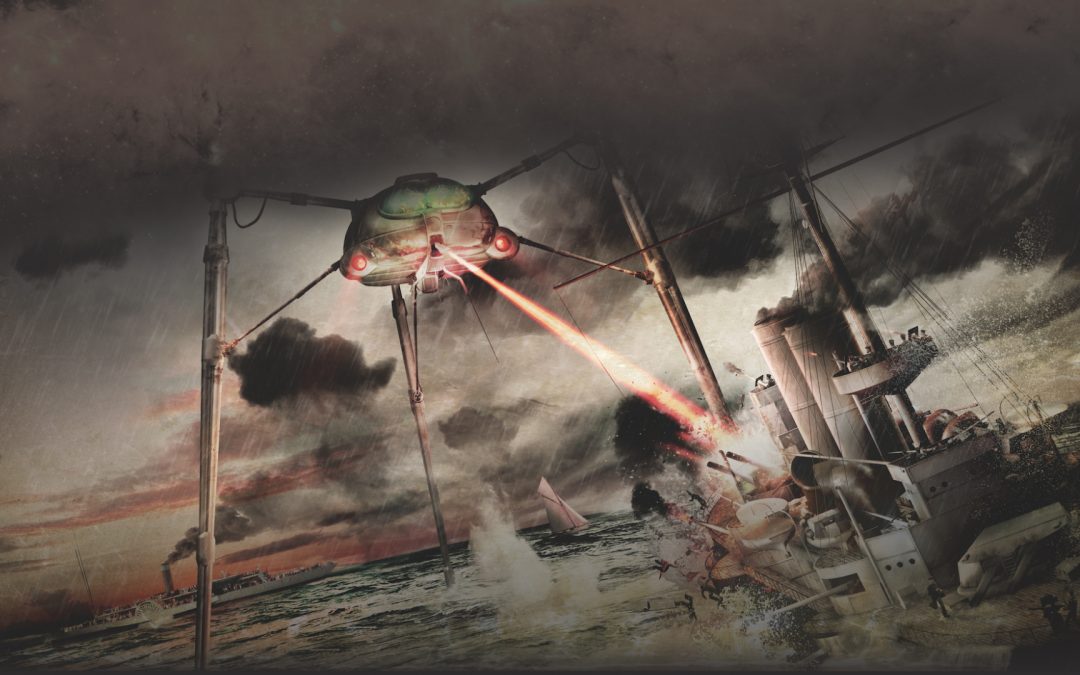 From The War Of The Worlds to Black Mirror, we look at the Brit shows that shaped science fiction…

Science fiction might be viewed as the blockbuster domain of Hollywood, but in truth Britain has made huge contributions to the genre.

As Audible readies Jeff Wayne’s The War Of The Worlds: The Musical Drama – a brand new version of HG Wells’s classic sci-fi tale, for release on November 29th – we take a look at the novels, TV series and movies that have made a big contribution to science fiction…

See related
The complete history of The War Of The Worlds

Frankenstein; or, The Modern Prometheus

Is Mary Shelley’s Frankenstein (1818) the first true science fiction novel? Many, including SF giant Brian Aldiss, have called it that, and, as Brits, we should feel justifiably proud that this world-conquering genre began its literary life on these shores. Less celebrated, though just as important, is Shelley’s follow-up, The Last Man (1826), which tells of a devastating future where mankind has been pushed to the brink of extinction by a deadly plague.

The War Of The Worlds

HG Wells may not have invented the science fiction novel, but he certainly helped to popularise it at the end of the 19th century. The War Of The Worlds was Wells’ sixth book, published when he was just 32, yet it remains not just his most famous and adapted novel, but one of the most analysed and written-about texts in the SF canon. And it’s quite something that, despite first being published 120 years ago, it’s never been out of print.

It’s telling, too, that the story has spanned radio plays (Orson Welles), feature films (notably George Pal and Steven Spielberg’s adaptations) and Jeff Wayne’s groundbreaking musical work from 1978. Audible’s new original production of the latter, Jeff Wayne’s The War Of The Worlds: The Musical Drama, brings the story to a new audience with Michael Sheen, Taron Egerton and Theo James among its impressive voice cast.

Few TV series had rattled the nation’s collective nerve than Nigel Kneale’s 1953 SF horror, The Quatermass Experiment. A sequel, Quatermass II, followed in 1955, but Kneale’s third serial, Quatermass and the Pit, is widely regarded as the apogee of this culture-rocking series, a programme which, according to broadcasting legend, emptied the streets and pubs when it broadcast. In Quatermass, the alien threat was always an oblique presence, a mistily defined sense of ‘other’. There were no traditional monsters in Kneale’s concept of science fiction, and the series’ quasi-documentary realism upset some viewers so much that the show was preceded by a BBC-delivered health warning.

A series that can remake itself from story to story, and one where occasional facelifts are hardwired into its DNA, it’s difficult to think of a show with a more dazzlingly flexible format than Doctor Who. Now in its 55th year, Doctor Who has weathered several cultural lifetimes, from Harold Wilson and Cliff Richard through Margaret Thatcher and Morrissey to Theresa May and Stormzy. Proudly, quintessentially British, it’s clear that, even though at the time we were crushed that the Paul McGann-fronted American TV series never achieved flight, Doctor Who true place was on British television. In fact, it’s difficult to see it being as embraced in the US as much as it is now if it was just another cookie-cutter SF show with a Yank-accented lead.

Before Stanley Kubrick unveiled his ambitious, poetic space epic, science fiction on the big screen was shrugged off as a rather artless, trivial genre. But partnering up with respected SF author Arthur C Clarke, Kubrick gave the world one of cinema’s most remarkable, unique films. Commendably high-minded, 2001 concerned mankind’s next step of evolution, spurred by the discovery, on the Moon, of a mysterious black monolith. Some may find it slow, maybe even pretentious, but Kubrick’s movie remains an utterly unique cinematic experience.

The Hitchhiker’s Guide To The Galaxy

Science fiction and comedy had never been as successfully partnered-up as in Douglas Adams’ fizzily inventive radio phenomenon from 1978. Since that initial six-episode run, The Hitchhiker’s Guide To The Galaxy has been a book, a TV show, a movie, a video game, a stage play and birthed a further five radio series, the latest of which (still featuring most of the original cast, it must be said) was broadcast earlier this year. Not for nothing has this series become one of the most quoted, and enduring comedy shows of all time.

Although influenced by The Twilight Zone, there’s little of that show’s gentle whimsy in Black Mirror. Charlie Brooker’s stories are, instead, near-future fables with a fatalistic message for us all. The worlds of Black Mirror are ones of technological anxiety and paranoia, taking the fears and worries of today and amplifying them to nightmarish levels. The series began its life on Channel 4, but a move to Netflix gave Brooker even greater resources with which to tell his dark-hearted tech tales.

Red Dwarf has, rather mystifyingly, never been a critics’ darling, but the fact that it’s kept going (on and off) through three decades now is surely testament to its comic brilliance and its fans’ unwavering love. Premiering on BBC2 in 1988 it took a few seasons to find its voice (fans generally believe it only really came together when Kryten became a regular in series three). Key to its enduring appeal was that, unlike other SF-flavoured sitcoms, Red Dwarf boasted full-blooded and mind-bendingly clever SF stories, plots that, if you squeezed the laughs out of them, could sit easily alongside with the finest literary SF.

When Doctor Who smashed the TV top ten in 2005, it opened channel controllers’ eyes to the very real possibility that SF wasn’t necessarily a minority interest genre. The boldest of the post-Who SF explosion was certainly Life On Mars, a retro police procedural given a thrilling fantasy makeover, as modern-day cop Sam Tyler is thrust back in time to the neanderthal 1970s and has to work out whether he’s a) mad; b) in a coma, or c) back in time. The success of the series’ co-lead, the brutishly Y chromosome-soaked DCI Gene Hunt led to a sequel series, the more wildly outré Ashes To Ashes, which only further confirmed how mainstream SF and fantasy had by then become on British TV.

Jeff Wayne’s The War Of The Worlds: The Musical is available now – order it here.