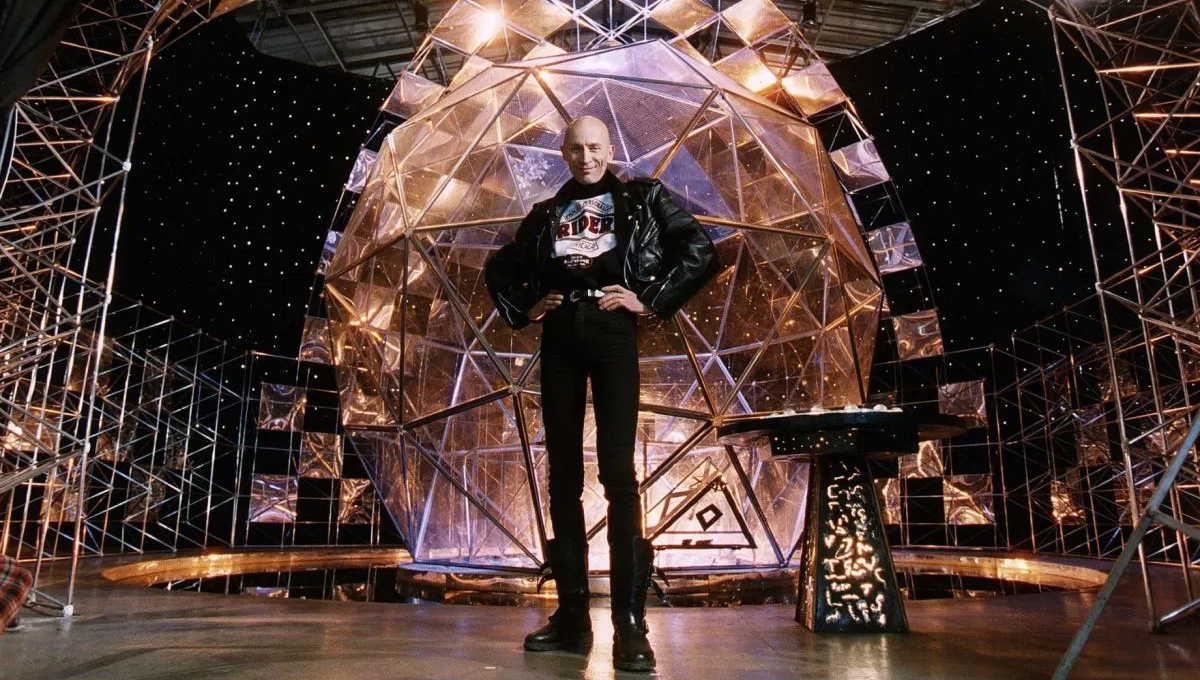 UK kids wouldn’t have survived the 90s without The Crystal Maze, Knightmare, Gladiators and more…

Remember boredom? Boredom was to a nineties childhood what stress is to modern adulthood – a constant and inescapable presence, relieved only by television.

The difference is, even television could be boring in the nineties. Grown-ups exclusively watched One Man And His Dog, The Budget and Ballykissangel, the sort of programmes that gave you Sunday-night-dread any day of the week. Try as you might to escape border collies, Kenneth Clarke and priests having harvest festival scrapes in picturesque Irish villages, it simply wasn’t possible. There were no streaming services to come to your rescue. Video rental was a birthdays-only treat. What else were you supposed to do? Read?

Every so often, a bright light would shine through, illuminating the murk of Ground Force and Oh, Doctor Beeching! Such TV moments were glinting nuggets of gold in a river of sludge, and here they are: the fourteen most exciting things to happen on UK TV in the nineties.

1. Wolf from Gladiators got told off If Wolf was your favourite Gladiator, you probably spent your walk home from school throwing Fun Snaps at local cats and wearing your school tie fat and short. Wolf was the hard kid’s choice. Like Angelica from Rugrats or Alan Rickman in Robin Hood: Prince Of Thieves, he was a baddie hero, naughty but beloved.

2. Someone fell off a wet log in The Crystal Maze The Crystal Maze threw a shaft of glorious sunlight onto nineties TV. It was fun and silly and led by Richard O’Brien’s terrific creative whimsy. It also inspired countless playground games (I was always O’Brien, everyone else had to be Steve from Kettering). Forget fame or wealth, in those days, kids dreamed only of wiring the big plug, operating a pair of tongs in gloves through safety glass and grabbing tokens in the crystal dome. It was a simpler, happier time.

The greatest joy of The Crystal Maze though, wasn’t O’Brien’s harmonica, or Mumsey, or even the dome. The greatest joy was when one of the Steves from Kettering fell off the slippery wet log in the Aztec Zone. Excitement in its purest form.

Buy tickets for The Crystal Maze LIVE Experience in London and Manchester, here.

3. Jeremy Beadle made someone think he’d crushed their car When he wasn’t raising millions for charity or sharing videos of grandads whose trousers spontaneously fall down at weddings, Jeremy Beadle was royally winding people up. Beadle’s About’s labyrinthine schemes, usually involving fake clairvoyants or allegations of adultery, were a Saturday night TV staple.

Memorably, Beadle once made a nice lady think aliens had landed in her back garden (this being the British countryside, she sang it a song and offered it a cup of tea), but that wasn’t the most exciting thing he ever did. The most exciting thing he ever did was to swap someone’s car for a replica, then contrive a way to have it crushed like a coke can in front of their eyes! Amazing.

4. The people on Changing Rooms really hated it It’s hard to explain to today’s kids that as children, we’d willingly watch a home makeover show presented by a smiley lady and a dandy cocker spaniel with a glue gun, but look, we just did, alright? There was nothing else on and our teas were getting cold.

The best possible thing that could happen on an episode of Changing Rooms was for the owners (who’d been whisked away while their neighbours and the man who cuts the big wood for you in B&Q transformed their living room into the deck of the Starship Enterprise), saw the result and hated it. Sometimes they’d hate it and say so, which was fun; sometimes they’d hate it and pretend to love it, which was even better.

Definitely not fun was when Linda Barker and Handy Andy designed a suspended MDF display unit for a collection of antique teapots and it collapsed, smashing them all to smithereens. Nobody laughed their socks off then. Definitely not me. On the moodboard for 1994’s National Lottery BBC launch, there must have been just one word: hysteria. The whole thing was approached with a level of fanfare usually reserved for the Olympics or a Royal Wedding. There was dry ice. There were pensioners in jog suits. There was Anthea Turner interviewing members of the public in a branch of Spar. There was Noel Edmonds with a police escort driving Merlin the ball machine in a high security truck over Tower Bridge. With glamour, danger, and 20 million viewers mentally buying speedboats, excitement of its like will never be felt again.

6. PJ was blinded on Byker Grove Some generations will always remember where they were when JFK was shot; others will never forget the moment the Challenger space shuttle exploded. Kids of the nineties have a similarly traumatising event etched into their collective memory. It was December, 1992, a Tuesday, just after double geography: the moment PJ was blinded in a rogue game of paintball in Byker Grove. “He cannit see, man!” shouted Duncan, channelling our shared panic as yellow paint dripped down PJ’s poor face. The horror! Would PJ ever be ready to rhumble again?

7. Presenters wore outfits so loud you can still hear them screaming To anybody else, a leopard-print jacket alone would be enough of a statement piece. Not for The Crystal Maze’s Richard O’Brien. Bam! On with the floral waistcoat! Boom! Pair that with a black roll-neck, neon yellow shirt tied in a knot at the waist, jeggings, be-ribboned Panama Hat and a harmonica, and ka-boom! Welcome to the Medieval Zone.

Nobody told O’Brien what was on trend that season. He was the trend.

8. Cilla was a detective on Blind Date A genuine shocker here from Blind Date, the show to which Big Brother contestants flocked before Big Brother existed. 1998 gave Cilla Black her Hercule Poirot moment. Chatting on the sofa to previous picker Nicola and her pickee Paul, Cilla dropped the following bombshell: “I know what you’re at, and I feel awfully, deeply saddened by this,” she told Nicola. “You don’t work as a temporary secretary. I know for a fact you’re actually an undercover journalist and you’ve robbed somebody of coming on a proper Blind Date.”

That’s right, ‘Nicola’ was actually Gill the Cosmopolitan journo and she sat on a throne of lies. The crowd went wild. It’s Christmas 1992, and you can’t get one of Matchbox’s woefully understocked official Thunderbirds Tracy Island playsets for love nor money. Who heroically steps in to save the day? That’s right, Anthea Turner armed with some old yoghurt pots and a couple of empty loo roll tubes.

Blue Peter’s Tracy Island make-it-yourself demonstration was our generation’s moon landing. Like magic, Turner conjured a genuinely amazing-looking playset from a week’s worth of recycling (not that anyone knew what recycling was in 1992). She saved Christmas, and the requests for Tracy Island instruction sheets flooded in to the Blue Peter studio for months. It’s impossible to impress upon modern youngsters the significance of E.T. being shown on terrestrial television. The film was out in cinemas in 1982 but, pirate copies notwithstanding, it wasn’t available for home release for a good many years after that. It wasn’t until Christmas 1990 that the BBC bought the nation a special treat and aired the film just after the Queen’s Speech. Finally, we could understand all those jokes about phoning home. Robots are exciting enough, but fighting robots, on fire? That’s the most exciting thing in the universe. Robot Wars’ wackier designs upholstered in felt and acrylic were always a good bet for an arena fire, but sometimes you’d get lucky and a motor would overheat all by itself. The added bonus: Jonathan Pearce’s brilliantly overexcited commentary.

12. Your mate had a satellite dish Every child in the nineties had a friend whose mum would buy them Pop Tarts instead of Somerfield own-brand cornflakes, a friend whose bum-bag spilled over with 10ps for blue ice poles and who bought non-discounted cassette albums from Our Price you’d then tape on a pre-used sixty-minute TDK. This was also invariably the friend who also had Sky TV. That meant The Simpsons. It meant Star Trek: The Next Generation. It meant the Undertaker, Hulk Hogan and British Bulldog on WWF. It basically meant trying to get invited to their house every day after school and twice at weekends.

13. The kids on Knightmare didn’t sidestep to the right left So much joy was to be had in watching the faces of children on Knightmare fall down to their Reebok Pumps when pal Simon (every Knightmare dungeoneer was called Simon) failed to listen to their urgent instructions and sidestepped his way into oblivion. Spellcasting H-A-H-A-H-A.

14. Someone you knew from school was on TV Perhaps they’d won a competition on Blue Peter, or sent in a photo to the ‘Down Town’ section of CBBC’s Broom Cupboard. Perhaps they’d appeared on Mallet’s Mallet or Fun House. Perhaps they’d been injured by those snap bracelets you used to get at the market and were featured on Watchdog with a festering wrist wound. It didn’t matter. Somebody you knew from school being on TV was legitimately the most exciting thing that could ever happen.

Take on The Crystal Maze at the LIVE Experience in London and Manchester. Tickets available here.