Supernatural season 13 episode 8 review: The Scorpion And The Frog 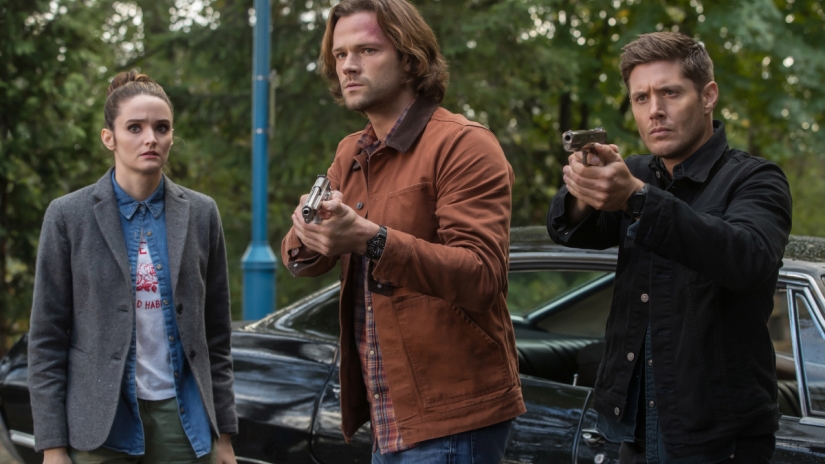 When the search for Jack gets desperate, the Winchesters unwittingly find themselves on a heist crew. Spoilers ahead…

13.8 The Scorpion And The Frog

In the spirit of the season that has embraced ‘let’s try something new!’ comes yet another first. Clearly, while pitching episodes in the writers’ room, amid suggestions of doing a gender-bent Samantha and Deanna episode* or an actual musical episode, someone said ‘Let’s do a heist!’ It was done. And it was good.

*I have zero evidence these episodes were suggested but in 13 years, surely someone thought about it.

Sam and Dean were dragged unwillingly into this story in order to get a chance at finding Jack, paired up with Smash and Grab – clever enough one-off characters that I’m sorry they disposed of so easily. Everything played kept with the theme, complete with eschewing the classic rock and Supernatural theme music for a more traditional heist-style soundtrack underscoring the approach to where it would all go down.

Part Ocean’s Eleven, part Indiana Jones (with poison darts and booby traps included), and a little bit Saw –  it was an episode of intrigue but mostly low energy until we got closer to the ending showdown.

I did enjoy Dean’s part where he has to place his hand in a gargoyle’s mouth to donate his blood to open a magic door. He particularly stresses the fact that there could be spiders in there – a fear I never thought Dean even had. His hesitation and angst here was particularly amusing.

The way Sam and Dean dealt with the pressure-sensitive path to the safe was clever and amusing. Instead of the typical Sam figuring things out – they simply pushed the immortal owner in the path and used up all the poison darts on him. It was a quick injection of humour into the scene. Get it? I know you get it.

There was even a little bit of a car chase in this, just to complete the heist adventure vibe. Dean driving the Impala in reverse being chased down the road was pretty cool. Short-lived, but a nice touch to literally backtrack the heist group until they were backed into a corner with the new crossroads demon.

A note about the title. The Scorpion And The Frog refers to a fable about a frog who agrees to take a scorpion across the river, only to be literally stabbed in the back because it is in the scorpion’s nature to do that. Clearly there was plenty of backstabbing present here. The best, of course, coming from Smash who finally gets back at the crossroads demon.

There were some really good moments in there and certainly a new fun episode style to try on. I would have little more heist style present in the editing, and I could have used a little more action early on. Other than that, not a bad lead-in to the mid-season finale next week, where we’ll finally get back to our main storylines: the search for Jack and Mary Winchester.

Read Bridget’s review of the previous episode, War Of The Worlds, here.