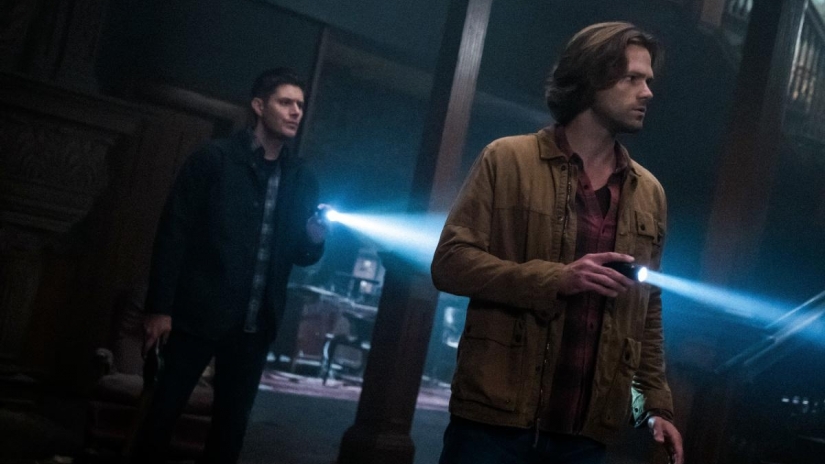 In what should be a routine case, Dean learns more about the afterlife through an unexpected reunion on Supernatural. Spoilers…

Advanced Thanatology starts off on a light note, with Sam doing things to make Dean happy. After all the troubles Dean has been through, Sam tries to make things easier on his big brother, which leads to some overindulgence and a hangover-fueled continental breakfast. There’s all these amusing little moments between them that can get lost if you’re not paying attention. One such moment is when Sam is talking to Dean outside the hotel, and Dean walks away and impatiently waves his arms in front of a not-automatic door. Might seem trivial, but that gesture says a lot more about what Dean is feeling than by what he tells his brother.

Those fun little asides led into a pretty by-the-numbers hunt for the brothers. We have several rehashed themes, such as kids exploring an abandoned building, documenting with camcorders, a mental hospital, and a murderous doctor. These are all things we’ve seen so many times. Even the unique nature of the doctor’s affectation for plague wear is dimmed by the fact that…well, it didn’t really make sense. Unless I missed the reasoning why the doctor had a collection of 14th century inspired doctor’s garb, I just suppose he liked collecting them. I also had problems with some of the ghost logic in this episode. The doctor is strong enough to blow away the salt from the door (why, when even demons can’t?).

Things finally get tossed up when we hit the halfway point. Dean enters the Veil to try to communicate with the ghosts and meets up with Death – but it’s not our usual guy. It’s Billie, the Reaper that Castiel killed. She got a promotion.

Bringing back Billie was a fantastic idea. She has stolen every scene she has graced. Billie as a Reaper was formidable. Billie as the new Death? I didn’t know this was even on my Christmas list, yet here it is.

What’s great is that Billie has grown as a character. She used to be all set on making sure the Winchesters would stay dead if they ever died again. With her new job came a new understanding. The Winchesters are important. “You have work to do,” Billie tells Dean, echoing that familiar line from the pilot. The Winchesters still hold a mysterious lofty position in the universe.

There’s also a really cool moment with subtle cinematography in this scene. As Dean talks to Billie, the camera is at first on Dean’s left, but as the conversation shifts in his favour, the camera tracks behind him to land on his right side. The shots from that point are then framed from that angle.

‘Crossing the line’ is a very deliberate action. If done poorly, it creates spacial confusion on where the characters are in the scene. Here, that one smooth long shot moving behind Dean seamlessly blended the change while giving a visual cue that something was changing. Plus, characters on the left side of the screen tend to appear more powerful. There, that’s a thing you know now.

The episode comes full circle when Dean finally levels with Sam. “I just need a win,” he tells his brother. He’s not so sure they make a difference in the world. When confronted with Billie’s revelation, it makes sense that he feels more like a pawn than a player.

The episode ends beautifully. Dean gets a mysterious call, we see a long shot of the Impala driving through an alleyway. Neon lights and a lit up cross provide multicoloured ambience as the car draws near. Finally, we see a trenchcoat wearing man at probably the last phone booth in the U.S. Castiel’s back, baby.