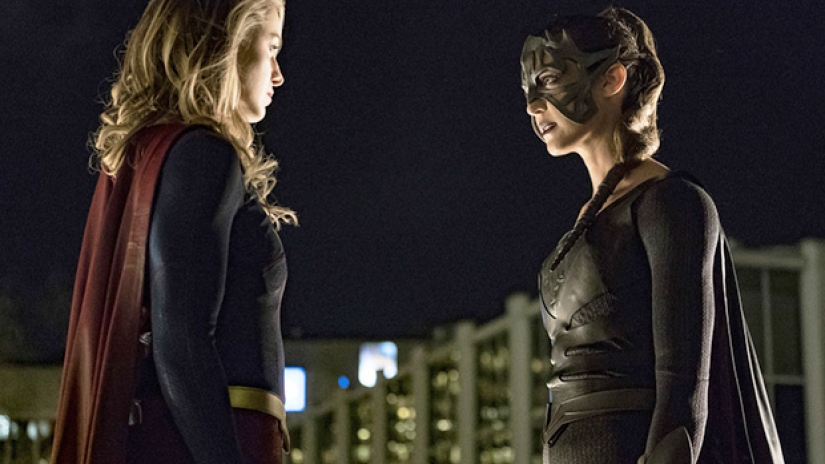 Supergirl delivers the highest stakes we've ever seen in the action-packed mid-season finale. Spoilers ahead…

Tonight’s stunning episode of Supergirl featured the most beautifully shot fight of the series so far, some of that old sense of humor we’ve all been missing, and a ratcheting up of the emotional intensity for almost every story arc. The stakes on Supergirl are personal and emotional, and that serves the tone of the show well. But for the first time in ages, it genuinely feels like Supergirl could lose a physical fight.

In any other episode, any number of one-liners about M’yrnn’s love of hot chocolate, J’onn’s love of Empire and Hall & Oates, the matriarchal old-world religion of Krypton, or Kara calling the Danvers sisters crones would be delightful and worth discussing, but this episode moved at a fast clip and packed in so much to love that there isn’t time to discuss it all. Suffice to say, I don’t know what more we could possibly want in an hour of television, never mind an hour of Supergirl.

It seems strange to say it immediately following the Earth-X crossover wherein Kara literally battled the Nazi doppelganger of herself, but never before have we seen Supergirl with such a well-matched foe. This fight outclasses the Overgirl fights in every way, and ends with another slow-mo shot of Supergirl falling through the city.

I don’t think I could possibly oversell how amazing this lengthy, artful throwdown really is. It has been a while since Supergirl has really let loose, and tonight we got an all-out slugfest with an evenly matched opponent, to the tune of Brenda Lee’s Rockin’ Around the Christmas Tree, no less. Every inch of this thing is beautifully shot, with mixed lighting out in the street, a first-person POV at the company Christmas party (which is inexplicably on Christmas Eve itself), and multiple slow-motion shots that really make the most of these two characters’ abilities and awesome strengths. The fight continues out onto the streets of National City where everyone in town watches Supergirl get her bell rung. A little girl even asks if she’s dead!

There have never been any real stakes when it comes to Kara’s Supergirl-ing. It has always been a question of how, not if, she would defeat her foes. For the first time, in Reign, Kara has an adversary that credibly makes National City wonder if Supergirl can really save them.

As far as everything else, Morgan Edge continues to be the worst, and is probably responsible for Lena’s quarterly assassination attempt. His character is a bit thin, but it’s played by such a talented actor that the performance alone gives Edge the texture he needs. I’m also with Winn and James, in that I don’t particularly care if Morgan gets hurt. Sam on the other hand…

I could take or leave the Lena-James pairing (mostly leave) but I can’t find it in my to complain about something so minor in an episode so great, especially since the pair have great comedic timing together if nothing else, and the storyline seems to be a way to give them both more meaningful screen time. Does Lena notice the shield that pops out of James’s arm? Because she did not have questions, and she really should. If they don’t lampshade her knowing everything all along soon, I’m going to wonder how she could possibly be so unaware while still being a genius.

Mon-El and his wife are really trying to get back in Kara’s good graces while unintentionally shoving their relationship in her face at every possible turn. Kara’s assessment is spot on: this is a case of three good people in a very bad situation. With a show that has such fantastical elements, the fact that the relationship problems are grounded in mature, realistic struggles anchors the story from week to week. At some point I’d like to see Mon-El have to reckon with the fact that when he went back in time, he chose not to try to wake up with Kara – he’s here completely by accident. It will also be interesting to see how his years of apparent discipline (see: training in his spare time) and moral maturity (leading the Legion by Kara’s example) have affected who he is as a person, beyond his wife just telling us these things are true.

Ruby and Sam’s relationship and backstories continue to be uncovered as fully realised, which is impressive for characters we only met in the season premiere. Ruby seems to be the key to Sam’s redemption, or even just waking her up from the semi-fugue state that her Reign programming has put her in. But will her little girl’s love be enough to bring her back from the edge? Probably, but how much damage will she have already done by that point? This season has taken great pains to show how much the women of Supergirl mean to Sam, and harming Kara, Lena, and Alex would damage her emotionally in an irreparable way, even if they all forgave her.

Will Supergirl recover? Will Mon-El be able to keep it together in front of his wife now that Kara is hurt? Can Sara Lance come visit Alex Danvers for some bourbon and see what happens? Find out in January!