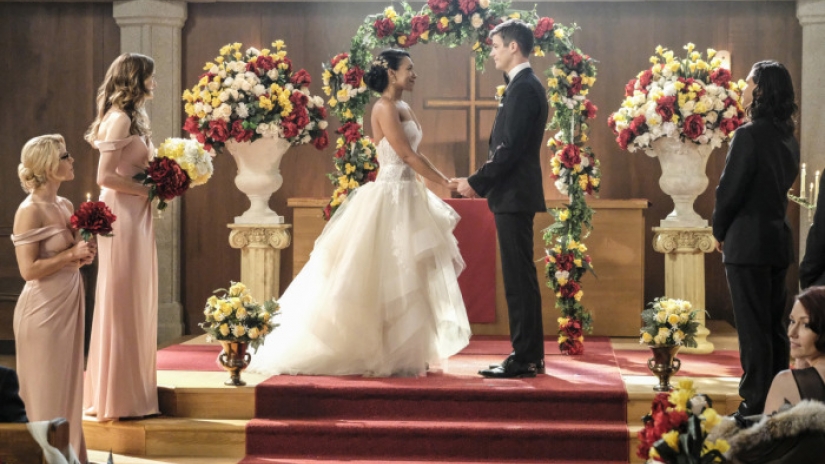 This year's DC TV crossover begins with Supergirl in Crisis On Earth X Part 1! Spoilers ahead in our review…

We were promised a more serialised crossover this year, and Crisis on Earth X Part 1 delivers on that front. In past crossovers, there was a clear ‘home court advantage’ so to speak. That is to say, while the characters concerned with the main action appeared throughout the crossover, each episode generally took on the characteristics of the show the time slot belonged to. There were also usually side characters who only got to participate when their show’s episode brought the action into their orbit, whether physically or otherwise.

If Crisis on Earth X were to follow that model, Barry and Iris’ wedding would likely have had to wait until tomorrow night’s Part III. Instead, we got the briefest of intros that will seemingly have J’onn, Winn, and Mon-El’s only appearances. It makes sense story-wise for Mon-El to be sidelined, since Kara is still hurt, Alex is obviously pissed off, and he doesn’t have any obvious utility for the team-up or even in Kara’s life right now. It also seems fair, given that the Flash/Supergirl (with a dash of Barrowman) musical episode was anchored in large part in the love story of Kara and Mon-El.

A truly serialised crossover is more ambitious, but it’s also more freeing. In some ways, much of this episode feels like eating our vegetables: obligatory preamble that we would be just as happy to skip to get to the good stuff. It’s quite clear from trailers and episode descriptions that the fun won’t get going until Iris and Barry actually try to say “I do,” and are inevitably thwarted.

And yes, they are thwarted by Nazis. Futuristic-looking, alternative universe Nazis. From the jump, this episode feels nothing like Supergirl’s sensibility. Earth X is all red zeppelins and gritty, black cityscape. I’m with Oliver and his incredulity: Nazis?! It’s hard not to think of Star Wars with these visuals, or grimmer, less interesting takes on superheroes.

A big part of what works with Star Wars is that the references to the Third Reich are just that: allusions, visual and otherwise, tying their villains to a real world touchstone that resonates strongly with the audience. There’s a similar tactic in V For Vendetta. Here, the visual is less successful first because futuristic Nazis reads too much like Star Wars. Second, there is no subtlety and no layers to this portrayal. These Nazis Sieg Heil and decorate every skyscraper they have with enormous Swastika banners. And if you’re looking for a modern portrayal of an alternative reality where the Nazis are in power, a much better one already exists: The Man In The High Castle. It is precise, carefully thought out, grounded in the historical reality, and poses powerful questions about loyalty, morality, and survival.

Perhaps worse than the flat, unimaginative visuals is the ways in which Earth X falls short of High Castle. These Nazis are cartoonish – a Supergirl with an SS on her chest where her Kryptonian S belongs sounds like an edgy teenager’s idea, or an actual white supremacist’s dream. Multiple characters yell “I hate Nazis!” on separate occasions during the episode. I’m sure the CW is very proud of themselves for their contemporary political commentary and ‘Make America Aryan Again’-style lines, but when the world is full of very real Nazis, such obviously fake ones feel cringe-worthy and lacking in any emotional or narrative weight. To answer Victor’s question, what’s so scary about Nazis seventy years after their defeat is the fact that they can not only march down main street in khakis and polo shirts, but that they gain followers and national platforms to spread their beliefs in the light of day, not the shadows.

When I think of other episodes of television when I’ve been treated to some hero punching a Nazi, I recall how cathartic it feels. Whether it’s The X-Files or Doctor Who, seeing true evil put down in a concrete way is energizing and rallies the audience, but only if we care about the villains and accept the reality of their evil in the first place. So far, the Nazis of Earth X are Nazis in name only. They’re a ghost story for children, a low-rent villain of the week that’s parading around with a name and a legacy, but they have yet to convince us either belongs to them.

Worse still, we’re expected to spend the better part of the hour not figuring out that the flying blonde woman and capable archer decked out in black and red are Earth X’s versions of Oliver and Kara. Even if you buy these villains, the most (and only?) surprising thing to happen this episode has nothing to do with the bad guys, but rather Felicity expressing that she doesn’t want to legally marry Oliver.

Speaking of that, a delightful moment of classic Olicity banter, the most successful parts of this episode are character-driven moments. Oliver and Barry’s talk about marriage and finding happy endings showcases just how much Oliver has grown in the past few seasons, although him naming Barry’s comparative wisdom in this area was a bit too on the nose. Oliver’s grumpy old curmudgeon routine is always worth a few laughs, and I think it landed better than Rory’s lines. Speaking of Rory: why on earth is he there, other than to keep the promise that there would be “humor” in this episode? Cisco and Wells make for better comedy and their presence makes more narrative sense.

Other successful moments include Alex and Sara’s undeniable chemistry, which only improved when they started fighting in tandem. The continuation of Firestorm’s collective troubles is also promising, for the way it integrates an existing important storyline for characters who don’t have a show named after them.

In the coming hours, I’m looking forward to seeing some of Team Arrow like Curtis, Rene, and Dinah, and more character-driven developments that will affect the four series beyond the crossover event. I’m hoping for some stakes for Earth X, and rooting for the ambition of a truly serialised crossover, even if it is hampered by a villain they have yet to sell me.

Read Delia’s review of the previous episode, Wake Up, here.