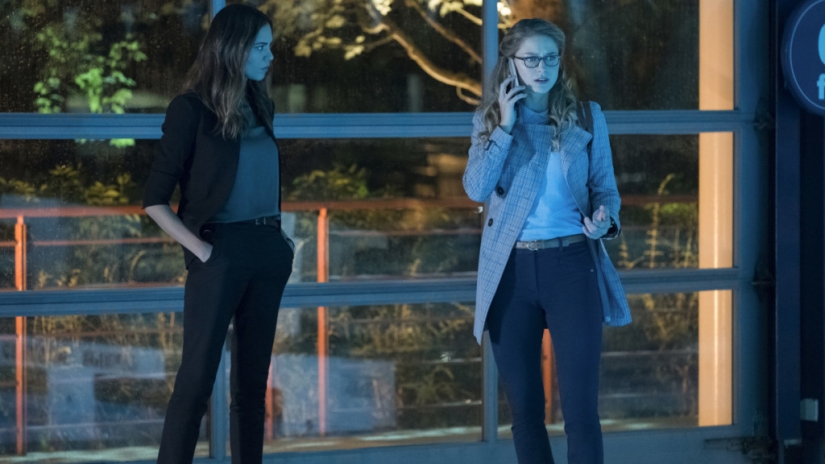 The women are centre-stage in this week's character-building Supergirl episode. Spoilers ahead in our review…

Damage is largely an expository episode of Supergirl, letting us get more familiar with our new characters as well as the new dynamics between old favourites. But don’t mistake that for meaning the episode is clunky or a bore. On the contrary, for the second week in a row Supergirl continues the winning formula of focusing on the women at its core, with the welcome addition of James.

Lena’s storyline provides continued fodder for the Supergirl writers to comment on current events IRL, with references to the water crisis in Flint and the necessity of a news media with integrity. That said, the “lock her up!” chants at Lena’s press conference felt a bit on the nose. The most successful political references from this season and last were either clever, optimistic, or both, and this was none of the above.

Sanvers is no more. Alex and Maggie finally did what they’ve known was true for a while and called it quits. For the sake of the importance of this relationship, as well as the many fans to whom it means so much, I’m glad Supergirl took its time with the dissolution of something so important to one of the show’s main characters. While the break-up was inevitable, it was also heartfelt and genuine, with the two women trying to find any possible way they could stay together Maggie telling Alex she’s going to be a great mother. Their relationship ended like it began: with love, respect, and great booze.

While there’s already a tonne of speculation about who Alex may end up with next (Sam has yet to open up about her sexuality, and Lena seems like she has chemistry with everyone these days), I hope for her character that the show allows her some time to mourn such a meaningful relationship. Besides, she’s never really dated, and that would be a great thing for a workaholic like her to explore.

Luckily, the early friction between Lena and James was short-lived. She soon realises that he is both good at his job and a genuine hero when he takes a bullet for her and keeps things professional on the job, and he realises that she has her priorities in order when she steps down from CatCo in order to maintain its integrity.

Those knowing looks at the end of the episode lasted a little too long for comfort – are we looking at the beginning of a James and Lena coupling? I’m all for James having more to do on this show, and his trajectory this episode was more satisfying than anything else he’s done this season, but pairing him with Lena feels like shoehorning two great characters into one weird plot to solve a couple of problems (SuperCorp, James seeming superfluous) for the writers, rather than anything motivated by the characters themselves.

Edge proved himself to be a much more despicable villain than I initially assumed, with his willingness to poison an entire population. Lena’s reaction to believing she accidentally caused lead poisoning in children was believable, and provided a nice excuse for Sam and Lena to get into some good old fashioned investigation work. I was a bit surprised by Lena pulling the gun on edge. She went around the bend and showed her Luthor side in a surprising, yet ultimately well-intentioned way. I have a feeling we’ll see that side of her again, especially since it’s in direct conflict with Supergirl’s refusal to play as dirty as Edge, for which he taunts the Girl from Krypton at the episode’s close.

For the second week in a row, we have a celebratory girls’ night among some of the most badass women of National City, which feels completely natural. The declaration of sisterhood between Sam, Lena, and Kara, however, feels a bit contrived – while we learned in this episode that Sam has known Lena for a long time, we haven’t really seen any evidence of that in their interactions, so this sudden declaration of sisterhood between them feels unearned. On the other side of the couch, calling Lena and Kara sisters feels more like a try-hard response to the #QueerEl fans out there than something the characters would naturally say. It stands out, especially in an episode where Kara has to choose between saving Lena and the city and refuses to let anything happen to Lena, in an act of heroics typically reserved for family or her love interests.

The pacing for Sam’s trajectory has been this season’s through-line: deliberate and well crafted, unspooling slowly, and this episode is no exception. We’re getting to know her primarily as a person, as we see just enough bits and pieces about her mysterious powers to propel her arc forward and keep us wanting more. For everything we learn that sends us one way (she can stop bullets!) we see something that contradicts it (her inability to access super-strength on command.) Introducing the case of the week via Ruby’s classmate was a great way to keep Sam and Ruby in the loop, especially on a show that now has such a large cast of characters. And it seems like Sam may have some other secrets to reveal in the coming episodes, given her sudden hacking skills.

Read Delia’s review of the previous episode, The Faithful, here.