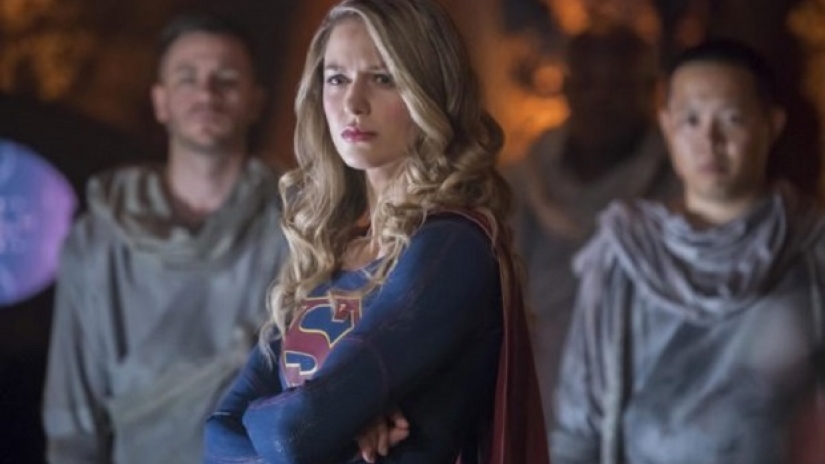 Supergirl takes a backseat in this emotional J'onn- and Sanvers-centric episode. Spoilers ahead in our review…

This episode is all about fathers and closure, although not everyone gets the ending they wanted.

It’s rare for Supergirl to take a back seat on her own show, but in this case it was worth it. While she was certainly part of J’onn’s adventure on Mars, she played a supporting role that allowed J’onn’s relationship with his father and the Martian resistance to take centre stage. Meanwhile, back on earth, the absence of Kara, Winn, James, Lena, and new characters Sam and Ruby allowed the emotional Maggie-centric story the room to breathe that it deserved. Like other Flarrowverse/Berlanti shows, this ensemble is getting too big to give every character the screentime they deserve, and sometimes the only answer is to divvy up episodes.

M’gann’s emergency at the end of the last episode turns out to be a personal one for J’onn: his father is alive. M’yrnn Jonzz is a religious leader, and this episode takes the opportunity to open up the religion of Mars, which is intertwined with the origins of the genocide white Martians perpetrated against the green, while also showing Supergirl go toe to toe with her equals for the first time in a while.

So far we’ve had just the right amount of M’gann with her occasional visits, and I’m interested in checking in with her fellow resistance members again throughout the season. Their message of rising above to be better than their enemies certainly feels timely, and M’gann’s leadership is in line with the other empowered women leaders of Supergirl.

While there are already a tonne of characters running around, adding J’onn’s father beyond this episode feels worth it. He gives J’onn the opportunity to open up about his old life, and potentially adds another player to the DEO plots. I can’t wait to see more adventures with the J’onzz men and perhaps more flashbacks to their Martian life, too.

The other development this episode was the return of fun!Kara. While the Britney Spears gag was incredibly goofy, it’s good to see the show getting back to its tone. Moreover, Kara was able to discuss more mature themes like missing her parents, the disappearance of Mon-El and the Martian religion, without losing any of her hopeful spark. That gives me hope for the show’s ability in the future to tackle more complex subjects without losing the lightness and optimism that makes it so great.

Meanwhile, Alex had a relatively positive experience coming out. Her loved ones accepted her for who she is, and while it was an important revelation and experience, it didn’t fundamentally change the way anyone else saw her or interacted with her. While Kara had some trouble adjusting to her sister being in a relationship, that would’ve happened regardless of the gender of the person she dated, something Kara was eager to stress. Maggie, however, wasn’t so lucky, and her experience reflects what many young LGBTQ folks face when their parents find out about their orientation.

Keeping a couple narratively interesting after they get together is always tough, but exploring the realities of merging two lives and filling in more colour in both women’s backstories are great ways to tell interesting stories without getting into the many tragic tropes that so often plague queer portrayals. Maggie feels like a well-drawn character because Floriana Lim plays her so well, but in reality we still know very little about the guarded detective. Learning more about her upbringing and her

I expect we haven’t seen the last of Maggie’s father, and I hope that we see their relationship evolve over time. It’s not surprising that he fell back into his old way of thinking, and in fact that felt more realistic. Still, between his showing up at all, carrying Maggie’s picture in his wallet, and following her career so closely, there’s reason to be hopeful.

It’s important that we saw these positive aspects of their relationship and that Maggie talked about what a good dad he had been. It can be easy to fall into the trap of thinking that prejudice like this is binary, with good people being supportive and bad people as the only ones to say and do harmful things. The reality is more complicated – showing that simultaneously constitutes more meaningful representation and better television.

Another thread that I expect we will revisit throughout the season is the fact that Alex wants kids but Maggie does not. While it’s hard to believe that they never discussed it before they got engaged, both women have strong feelings that won’t go away, no matter what Alex claimed at the end of the episode.