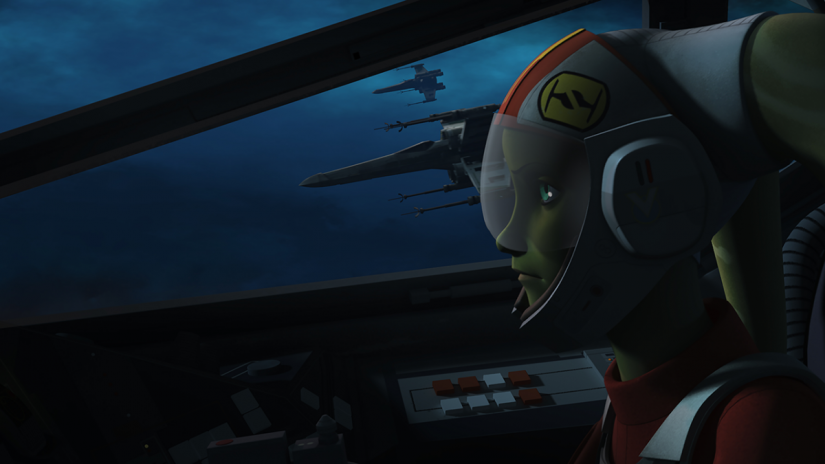 Hera Syndulla is one of the most enduring characters from Rebels. The mention of her name is blink-and-you’ll miss it in Rogue One, a bit of background detail that fans unfamiliar with Rebels might see as merely set dressing. But she was also brought to the younger set of viewers in Forces Of Destiny, which confirms that she survives up until Return Of The Jedi. She’s also my favourite character on the show, a pilot and leader who has to learn to open up to people but never loses her cool, careful mode of conduct. Therefore, I had high hopes for an episode centred around her and the space battle over Lothal.

Maybe those expectations were too high. Rebel Assault leaves us on a cliffhanger for the mid-season finale, effectively closing out the first half of an intriguing season. The big question, though, is one to which we already know the answer. I found myself nit-picking a lot of the choices here, although I think there are bigger issues with this episode as well, and some fantastic moments.

Why does Rukh show himself before leading Hera and Mart on a chase? The plot demanded they find a hatch anyway, so the assassin clearly showing himself to his targets doesn’t add any tension. How could a teen choke out a full-grown stormtrooper in armour? I know the jokes about stormtrooper armour, and I’m not usually interested in ‘who would win’ rationalisations, but that was dramatic enough for me to notice. It makes the troopers feel oddly weightless. On that note, nothing about Mart is subtle, from his death-defying distraction to the clumsy dialogue about the unlocked hatch. The dialogue is flabby.

Those were some notable problems in an otherwise enjoyable episode. I was thrilled to see a squadron of X-Wings on screen again; the Rebellion’s fighter planes are just as cool as they were when I was young, and Hera has some neat manoeuvres. It was cool to see her fly circles around TIEs, although unfortunate that her best moves were saved for after the death of many of her squad mates. Did you see how she stood on her tail? Did you see how she took out those two TIEs so quickly? She said the thing! But I will try to set aside my overwhelming feelings about X-Wings at the moment. (Did you know Jaina Solo… anyway.)

Grand Admiral Thrawn definitely feels appropriate here; I half expect Tarkin to walk up beside him in true Original Trilogy fashion. His whispery voice and penchant for strategy continue to set him apart, and I think it’s fair to say that Rebels has made me understand a little bit of why people are so fascinated with Timothy Zahn’s books.

Once Hera is down on Lothal, the genre of the episode almost changes from flying ace to dystopia. Lothal has competed its transformation to Imperial wasteland, all red and black with survivors huddling in ragged groups drawn to the sound of a crashed starfighter. Hera fights on the ground like she does in the sky, focusing on moving fast and switching directions from a guarded gate to a distress call. Lothal is beginning to feel like Jedha: a place where traditions are dying and destruction will follow.

During the space battle, the rest of the Ghost crew were sabotaging Imperial guns. Kanan, fresh from Hera’s definitely-not-a-goodbye-kiss, wants to go back for Hera, but the others have their own mission: to get out. Kanan has not one but two affecting moments where he pauses and then finally goes back for Hera. It’s not subtle, but it does tug at the heartstrings. The music and the setting sun combine to give a sense of inevitability to the scene, and indeed, Kanan doesn’t actually get much done in this episode. Instead, he has surrendered to what the Force intends for him. We’ll see how that turns out for everyone.

This episode leaves me wondering what will happen next, but not as much as it could have. Putting Hera in danger seems like both the most obvious choice (because she won’t actually die) and one designed to pull at the heartstrings (see the aforementioned kiss). I will admit, the attention paid to the death of the one female pilot in the squad also took me out of the episode a little; there still aren’t enough women in the background of this show for killing one not to seem like an effort to drum up sympathy by trading in well-worn tropes.

Hera herself was wonderful, surviving everything Thrawn could throw at her, leading Mart to safety, and snarking the Empire to the last. She fights on the streets of Lothal the same way she fights in a ship: with emphasis on speed, changing plans fast and dodging Imperial patrols. I want so badly to be able to root for her. But it’s hard when the show’s writing doesn’t quite hold up. What was it exactly that she asked Mart to do that lead to such a dangerous distraction? Why in this war zone, of all places, does Rebels decide that people should ask droids whether they’re okay with something? Droid agency continues to be baffling and I know, I know that it’s a nit-pick in an otherwise exciting episode. It’s just pauses like this that slow the episode down and make me wish for some more economical dialogue.

So, what does it mean that Lothal is beginning to feel like Jedha? With things getting more ominous, the second half of the season should pick up even more momentum. I hope that Hera will continue to be the leader she’s advertised as. We know that she and Thrawn have a particular history, after he went through the wreckage of her family home and held her captive once already. Lothal is clearly in a bad way, but I hope Rebels doesn’t have to make Hera a damsel in distress to show it.