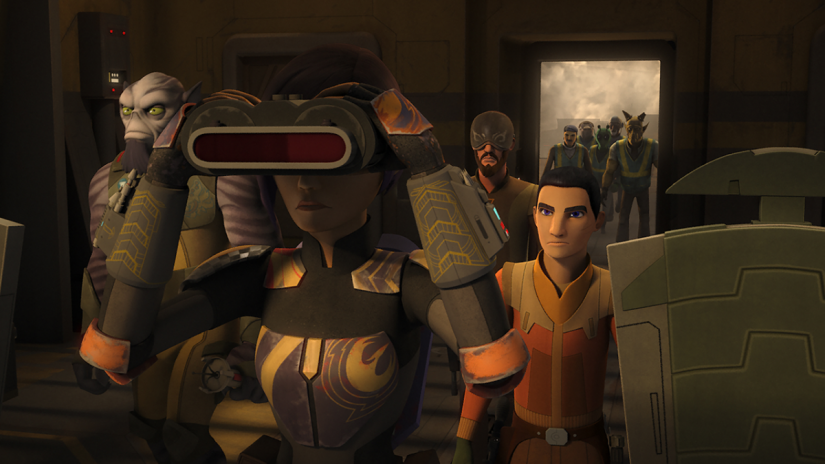 It would have been hard for Rebels to top Kindred in terms of game-changing revelations and answered questions, so Crawler Commanders doesn’t really try. Instead, Hera gives a heroic speech on Yavin 4 and the rest of the team capture a smoke-spewing mining machine. The Lothal segment is classic Rebels, mostly episodic except for a cute appearance by Ezra’s old smuggler friend Vizago. The plan is a bit muddled at first — the Empire is wrecking the planet, but the machine is run by the Mining Guild. But the Mining Guild seems to condone owning slaves too, so their slimy employees just got what was coming to them.

On Yavin 4, we get to see a rare instance of some of the major Rebel leaders working together. Seeing Mon Mothma and Bail Organa together, even briefly, was great. I was resistant to the idea of Mon Mothma as someone who deliberates and errs on the side of caution, but that’s just who she is in canon now. Making Mothma resistant to Hera’s plans gives this part of the episode its own plot in miniature, which justifies it even though I don’t love Mothma’s characterisation that enables it. I want Hera and Mothma to be allies, like they were in those few moments of silence at the end of the previous episode. However, that resistance ensures that Hera’s part in Crawler Commanders is also a definitive plot point for her, and one in which she clearly has her own agency. Hera wants to be heard, and it’s heroic and stirring when she finally takes matters into her own hands and gives an embattled speech to the Rebel council.

In the first season, Hera’s major emotional conflict was whether or not she could or should open up to Sabine. She needed to recognise that she had to trust her teammates. Now, she is asking the same of a Rebel Alliance scared and scattered. She’s clearly almost there in terms of opening up to Kanan. It’s time for the Rebel leaders to trust one of their most dedicated soldiers, and the fact that it’s a big moment when they do seems to say a lot about the new canon’s characterisation of the Rebels as sometimes suspicious and prickly.

Hera’s part might have been my favourite, but most of the actual action happens back on Lothal. After seeing the fields stripped last episode, the actual mining machine looked like a monster itself. The episode switches between humour, fistfights, and the aforementioned slavery plot, all wrapped up by a few instances of Han Solo-style ‘Everything is fine here, how are you?’ bureaucratic wartime comedy.

Seth Green plays Seever, a Trandoshan who looks more like a gecko than like Bossk and who ends up on the receiving end of the Rebels’ plan. Ezra intimidating his hissing voice was amusing, but I was a bit distracted by the lack of variety in the show’s aliens. Between the two Trandoshans, Zeb, and Rukh, there have been a lot of simian characters lately. The fight between Zeb and the Trandoshan slave driver has some harrowing moments, but seems a bit uncoordinated. Some sound effects seemed to repeat, and the din of growling and grunting plus two characters with similar builds made me wish for the more ‘elegant’ fighting style of the Jedi. Some of the hits didn’t look like they landed. Similarly, the result of the final fight scene was inevitable the moment it began.

The MVP of this episode in terms of combat is Sabine, who utterly assassinates two droids before kicking off in her jet pack. Sabine has always been comfortable in combat, but she looks downright formidable now, even without her trademark paint bombs.

Ezra has clearly also grown a bit — as his banter with Sabine says, he doesn’t want to be the guy the crew sends to climb through chutes any more. On the whole, though, this episode was… fine, with a generally light tone until the end. Then Seever goes from slimy to dangerous, and it’s to the script’s credit that the transition doesn’t come off as jarring. (The open furnace is jarring, but it’s a well-honed science fiction trope that there is no Occupational Safety and Health Administration in space.) Seever is slimy, not endearing, and works just fine as an avatar of the Mining Guild.

Vizago has some funny lines too (“Just like mother said. Once a scoundrel, always a scoundrel.”) but seems a bit more extraneous than the other Lothal characters. Ryder Azadi has settled quietly into the Rebel base (despite my utter insistence on his imminent treachery, he seems guilty of little more than being jumpy), and Ezra’s friend from the Imperial Academy has been neatly shuffled offstage on a supply run. It looks like this episode has found something to do with Vizago. He’s larger-than-life but hasn’t particularly developed except in that he isn’t actively hunting Ezra any more, so his participation is, again… fine.

Kindred left me wanting more, but Crawler Commanders was a return to form. An episode focused on adventure but peppered with cameos and character moments that almost worked, it could have been part of season one if not for the more serialised portions. And it was very good in terms of serialisation, quietly adding updates on the side characters. After episodes like Kindred, though, the attack-of-the-week didn’t quite feel like enough.

I do love that Rebels is showing that the Empire is ruining the world, even if they didn’t engage with the economics of the Mining Guild in any particularly deep fashion. I’m reminded of the way Avatar: The Last Airbender, always a benchmark for cartoons, sometimes showed characters crushed under various forms of imperial oppression, such as the worn-down residents of the Earth Kingdom. Instead, the fact that the Mining Guild uses slaves is basically another reason to justify the Rebels attacking it, and that’s okay. It’s another victory for the Rebels who clearly sorely need one — “Protocol 13” is coming, and I have a bad feeling that the Empire is about to unleash, if not the Death Star, something equally catastrophic on Lothal. Let’s hope Hera keeps everybody safe.