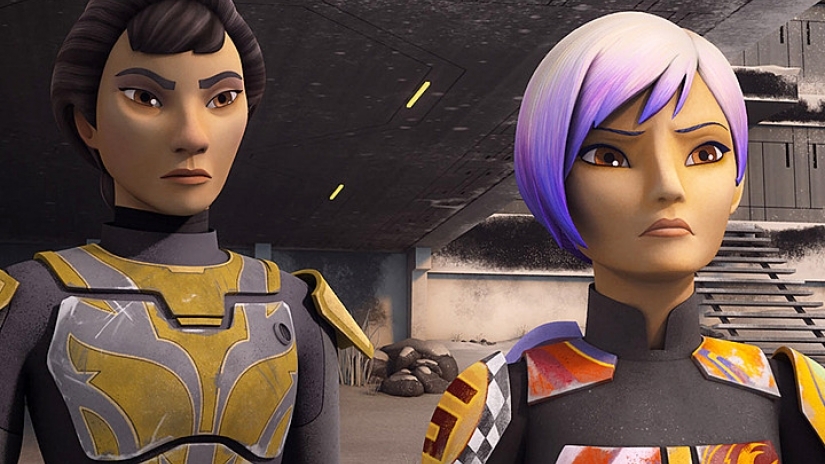 Star Wars Rebels is in flux. So far, the main characters have steered clear of the plot lines we’ve seen in the saga movies, except for General Syndulla’s wonderful blink-and-you’ll miss it mention in Rogue One. We know that the fourth season will be the final season of the series, so there’s only so far these characters can go. But it’s also a time of change. Who will live and who will die by the time the season is over and The Last Jedi is out? Even four seasons in, some of the characters still don’t feel fleshed out. Can the season premiere win me over after a break between seasons that offered a lot of more interesting Star Wars stories?

It turns out that it can. After spending time with her Mandalorian mother and learning to lead, Sabine Wren is back in a big way. The hook for the two episodes is strong: Sabine is trying to rescue her father from a rival clan, while Ezra gets into hijinks. Even the possibility of seeing Sabine’s father is exciting, since it means we will learn more about her history. The Mandalorian civil war becomes an important plot point, and by the end of the two-parter, I was looking at even the sparse landscapes differently.

Sabine is under a lot of pressure in these two episodes, as she finds that a weapon she designed when she was a student is now being used against her people. It’s an interesting way to show how she has developed. As an even younger child, she looked at the weapons she was building in the abstract, not as tools that might actually be able to kill her people. That impression is utterly removed now.

The voice of Sabine, Tiya Sircar, gives the young Mandalorian an energy that seems suitable for her age but can also carry the weight of a planet populated almost entirely by warring armies. Sabine makes a lot of important decisions here, and both her voice and the animation go a long way towards showing her inner turmoil. Art and war mingle in her family: it’s immediately apparent that her father shares her artistic sensibilities, even if their dialogue is a bit stiff. (I’m going to pretend it’s translated from Mandalorian, or that Mandalorians don’t quite know how to express feelings, especially in front of strangers.)

Viewers who aren’t familiar with the show may very well think that most Mandalorian leaders are women. Bo-Katan returns from The Clone Wars, and her aloof but heartfelt conversations with Sabine clearly show the emotion creeping out from behind the fierce words. She, Sabine, and Ursa Wren were all introduced at different parts of Star Wars TV history, and it’s cool to see all three of them in action here. (One odd choice: Bo-Katan looks about the same as she did in The Clone Wars, even though she’s from Obi-Wan’s generation.)

Sabine’s choice as to how she wants to lead is an interesting one. Mandalorians clearly have a violent history, blasting at their planet until once-green fields became desert. Even their efforts at peace are violent, with Sabine giving as good as she gets. The fact that the leader of the opposing Clan Saxon turns out to be an Imperial sympathizer with dreams of dictatorship isn’t surprising, but does avoid a question that stuck out to me — what if some of Mandalorian culture is the problem? The show points out the irony of armor becoming the Mandalorians’ greatest weakness, but gives a relatively short amount of time to the idea that the clans might finally be brought together not by a common foe, but by a strong enough leader who doesn’t want to lead a planet-sized army.

Most viewers, though, will know these characters already and go to the show for the action. While Sabine is the focus, Ezra and Kanan also have their own small stories that combine action and emotion well. The script ensures that every character has something they want to go home to, delivering on the message that the Ghost crew is as much family as they are fellow fighters. Hera appears in a brief but heartfelt conversation with Kanan that makes it clear that something is weighing on both of them. A big part of Hera’s season one arc was learning when to open up to her crew about the secrets passed down to her by the likes of Mon Mothma, and it sounds like she might continue to grow in regards to what she shares. For now, she gives Kanan something to fight for.

And he and Ezra certainly do fight. After last season’s arc in which his apprenticeship to Darth Maul fizzled out, I was wondering where the show would take Ezra next. Not being on the dark side is a perfectly legitimate bit of character development for him, and the relatively brief amount of time we see him in these episodes is amusing. He is neither over-powered nor useless, and a strong sequence where he climbs up falling vehicles in midair shows exactly how far his Jedi powers have come. When Kanan performs a similar maneuver, we can see how the apprentice learned from the master. Ezra is confident, but clearly not able to keep up with Sabine when it comes to Mandalorian-style jet pack combat.

Even Chopper gets a brief moment to shine. He’s introduced condescendingly explaining a joke, but the sight of the misanthropic droid with a blaster escalated his presence to mildly terrifying.

Even though it takes place during the Dark Times of the Jedi, Rebels has always been good at showing exactly how powerful Force users are. Here, Kanan cuts through a room full of stormtroopers without giving them a chance to surrender — and the lightsaber combat is very cool.

Heroes Of Mandalore does what Rebels does best – showing a colourful space family finding their way in a dangerous galaxy. Sometimes the characters still don’t look quite like they’re standing in the same space as one another, but I think it’s safe to say that Rebels is back with a strong start. Focusing on Sabine shows a dedication to fleshing out underserved members of the crew, and also tells a compelling story in its own right.