Star Wars: in defence of Ewoks and Porgs 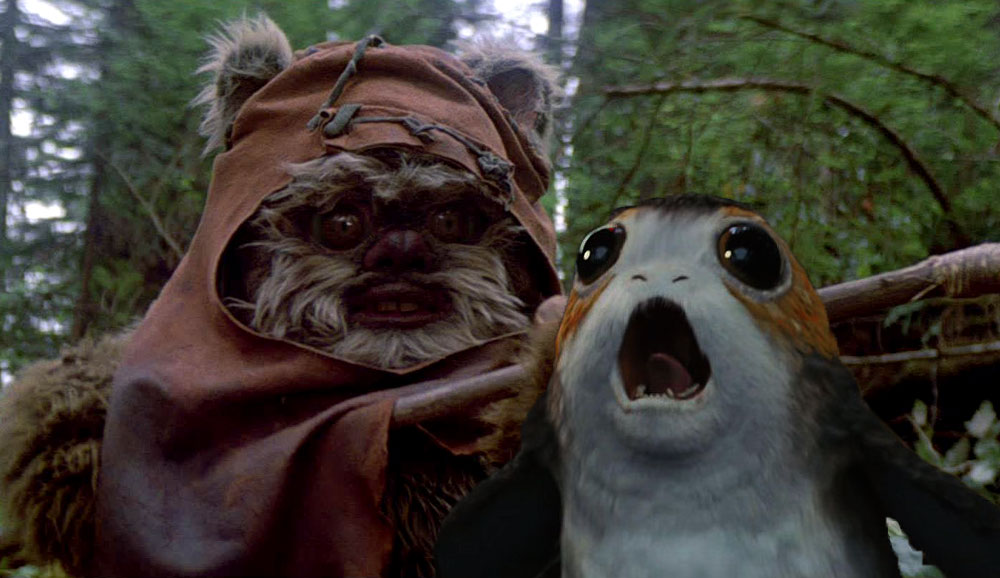 For decades, the Ewoks have divided fan opinion, and with Star Wars: The Last Jedi, the Porgs look set to do the same…

They helped bring down the Empire, but for some, they helped ruin an entire franchise. When Return Of The Jedi arrived in 1983, its cuddly, mischievous Ewoks immediately divided opinion among Star Wars fans: for some, George Lucas’ space opera ended not with a bang, but with a bunch of spear-waving teddy bears frolicking about in a forest.

Almost 35 years later, and it might seem as though history’s about to repeat itself. As footage from writer-director Rian Johnson’s The Last Jedi emerged, debate over things like Rey’s origins and Luke’s grim utterances was joined by another conversation: what are those cute, wide-eyed things that look like a cross between a sea lion and a penguin? They are, of course, Porgs – a birdlike creature that lives among the cliffs of Ahch-To – the planet where Rey found Luke Skywalker moodily skulking around at the end of The Force Awakens.

Back in July, Star Wars’ official website even devoted a brief interview (with story room chap Pablo Hidalgo) to these odd little creatures.

“They’re the Star Wars version of puffins,” Hidalgo explained. “They build nests. They can fly. Their babies are called porglets.”

Needless to say, fans have opinions on this new addition to the Star Wars universe – not all of them favourable. “If Chewbaccca doesn’t stomp this wannabe Jar Jar,” wrote one Twitter denizen, “I’m never watching Star Wars again.” “Porgs are the dumbest creations. Period,” wrote another. “Porgs = Ewoks. Pass” wrote a third.

Following the release of The Last Jedi’s second trailer, Guardian writer Ben Child joined the fray: “Is this Johnson’s knowing nod to the noble Star Wars tradition of Annoying Creatures, the equivalent of Return Of The Jedi’s ewoks or The Phantom Menace‘s battling gungans?” Child wondered. “Where’s Han Solo when you need him to throw the stupid thing out of the airlock?” The general sentiment among Porg haters seems to be the suspicion that, in the midst of an otherwise dark and dramatic chapter in the latest trilogy, the cutesy creatures will provide a distracting tonal jump – a little like Return Of The Jedi, where the action kept cutting from Luke’s confrontation with Emperor Palpatine to the Ewoks pottering about on Endor.

In many respects, the growing enmity between George Lucas and his fans began with the Ewoks back in 83. Long before the prequel trilogy and Jar Jar Binks, the once unassailable Lucas blotted his copybook with those stout space bears. You may know the legend already: when he was coming up with Return Of The Jedi’s story, Lucas had originally intended for the final act to take place around the planet Kashyyyk, home of the Wookies. That the most famous Wookie of them all, Chewbacca, could operate firearms and co-pilot a craft like the Millennium Falcon created a problem, however: Lucas wanted the fight to take place between the Empire and a pre-industrial species. To get around the problem, Lucas eventually came up with the Ewoks, which are furry like Wookies, but shorter and less technologically advanced. That creative decision occurred at a fairly pivotal moment for the Star Wars franchise – when Lucas’ long-time producer Gary Kurtz departed because, he later said, “The toy business began to drive the empire.”

“They make three times as much on toys as they do on films,” Kurtz told the LA Times in 2010. “It’s natural to make decisions that protect the toy business but that’s not the best thing for making quality films […] The emphasis on the toys, it’s like the cart driving the horse.”

For at least a portion of the Star Wars fans who were old enough to remember seeing the 1977 movie in the cinema, the Ewoks became emblematic of this shifting dynamic: a bunch of cute characters cynically thrown into the film to bulk out the lucrative Return Of The Jedi toy line. That Lucas softened the story outline – which would have seen Han Solo die heroically in the midst of the battle – didn’t help matters, either.

“Instead of bittersweet and poignant he wanted a euphoric ending with everybody happy,” Kurtz added. “George then decided he didn’t want any of the principals killed. By that time there were really big toy sales and that was a reason.” Whether Lucas’ reasons for introducing the Ewoks were commercially driven or not, the creatures were at least designed with the same care and depth as any other player in the Star Wars universe. They were sculpted by the late, great Stuart Freeborn, who helped create Yoda. Sound design genius Ben Burtt created their language, based on the tongue spoken by a community in northern Russia.

If you were of the right age, there was a lot to like about the Ewoks, too. Sure, they looked like teddy bears, but they had a darker side: they had a taste for human flesh, and they had a real talent for building traps. If you were still in single digits when Return Of The Jedi came out, then it didn’t matter that those AT-ST walkers got roundly defeated by an amalgam of logs and twine – the sight of Empire machinery getting smashed up by tiny critters was, for your humble writer at least, a joyful counterpoint to all the grim events unfolding up on the Death Star. To this five year-old, the Emperor was the stuff of nightmares; on his own, his psychological and physical torture of Luke Skywalker might have been too much to take. Intercut with the Ewoks valiantly taking on the Empire’s war machine provided some welcome reassurance.

It was only years later that the scale of Ewok hatred became apparent. Any talk of Return Of The Jedi in classrooms or playgrounds quickly turned to bear hatred. One friend said he cheered at the brief scene where a distraught Ewok prods the corpse of a comrade struck by an Imperial blaster. Things really kicked up a notch when some bright spark created the internet. Google the words ‘Ewok’ and ‘hate’, and you’ll be greeted with a string of think pieces and grim images: an Ewok skinned and turned into a rug. Darth Vader cooking a pair of Ewoks over a campfire. Whether or not you hate Ewoks – or Return Of The Jedi in general – seems largely defined by how old you were when you first saw it. On Twitter, author Saladin Ahmed sums it up best:

“Psst: ‘Ewoks ruined Star Wars’ is a bad meme born of a generation of male geeks who thought we were ‘too old’ for cuteness when Jedi came out.”

Those few words cut to the heart of Ewok hatred – more so, certainly, than accusations of commercial-minded cynicism. Most 80s kids probably didn’t care whether the Ewoks were created to shift toys or not – any more than that the Transformers and He-Man cartoons were engineered to sell action figures. What might have mattered more, to kids who were heading towards their teenage years, was whether Ewoks looked like the kind of cute, cuddly thing that might get you teased by your classmates.

All of which brings us, in a rambling way, back to Porgs. Yes, there’s the possibility that, if these diminutive creatures are mishandled or overused, they’ll stick out like a sore thumb. But so far, the new custodians of the Star Wars franchise have done a decent job of using their more whimsical characters with restraint; the tiny droid BB-8 may have shifted cargo ship loads of merchandise, but he also emerged as one of the most likeable supporting characters in The Force Awakens. There’s also something reassuring about the presence of the Porgs in the midst of what promises to be a fairly bleak chapter in the sequel trilogy. Just as the Ewoks contrasted with the cackling Emperor, the Porgs could provide a handy reminder – to young and old audience members alike – that not all is bleak and uncaring in the Star Wars universe.  Like the Ewoks, they’re also the product of careful design and thought – it’s heartening to see that The Last Jedi’s makers have used practical effects as well as CGI to bring the Porgs to life, just as they did with BB-8.

A younger, newer generation of Star Wars fans might squint at the Porgs and dismiss them as grating kids’ stuff. For fans of a certain age, however, their appearance could be described as something of a relief. When the second Last Jedi trailer emerged, the news was filling up with stories of grotesque, Jabba-like Hollywood producers, environmental calamity and nuclear brinksmanship. Little wonder that so many Twitter users were sharing their own Porg-related memes.

Star Wars lore tells us that, in the face of tragedy and unimaginable horror, Luke Skywalker retreated to a remote planet, set up camp on an island and lived a humble life surrounded by cute, inquisitive animals. If the opportunity came up, we’d probably do the same.