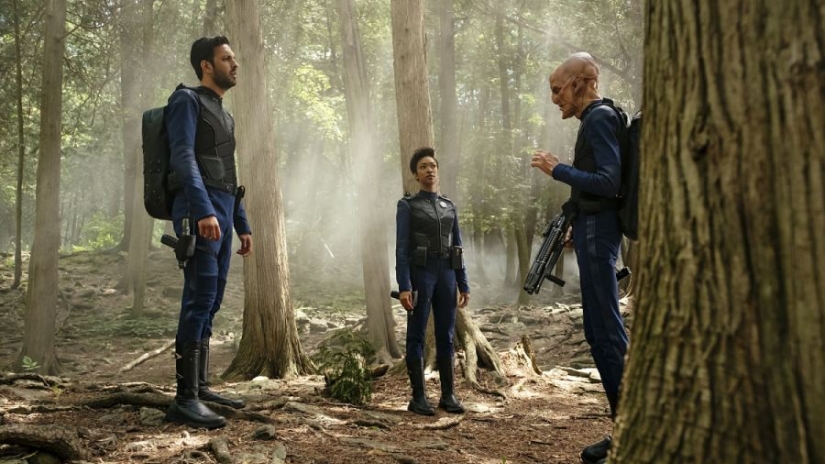 Well, Star Trek: Discovery couldn't just keep getting better and better, could it? Spoilers ahead in our review of episode 8…

Discovery has been improving week on week, so it was inevitable that it might hit a quality downswing eventually. Temporary blip or regression to the mean? Guess we’ll have to wait and see.

This week’s episode wasn’t terrible, of course. It was just a little generic. Broadly, I think everything on the planet was quite good (though I’d have liked a little more insight into the Pahvans, not to mention a more tangible design) while everything on Kol’s ship was bad. And as for Discovery… well, there wasn’t much going on there at all. Though we did get a pretty cool space battle out of it.

Generally, the problem I had with the episode is that I wasn’t really sure what the characters’ motivations were, and I’m not sure I even believe what I saw on screen. L’Rell, Saru, Kol, Tyler and Stamets were all being self-contradictory, but not in that Mad Men ‘they’re saying the opposite of what they feel’ way – more in a confusing ‘this episode needed a redraft to clear things up’ way. There were a lot of weird instances of characters making weird decisions and then changing them on a dime, not because they’re complex and conflicted, but because they didn’t seem to have particularly tangible motivations in the first place.

To talk specifics, the manner of Cornwell’s death (or is that ‘death’?) was so perfunctory and confusing that I don’t know whether I actually believe it happened as suggested. If, next episode, she wakes up and L’Rell says ‘I knew that would only stun you!’ then I’d completely buy that. Likewise, if she didn’t, I’d buy that too. The ambiguity could theoretically mean it’s exciting and unpredictable, but the stakes aren’t articulated well enough for me to care either way what happens. It’s all a bit ‘and then that happened.’

At least the cliffhanger suggests that this is as close to a two-parter as the show has done since the opening episode, so maybe we’re going to get a direct continuation of the ideas and plotlines in the next episode, which would explain the weird, truncated impression this episode gave: it just hasn’t finished yet.

The good stuff: Saru’s confession at the end was an interesting twist, though again, I’m not sure if it was genuine truthful insight or his guilt talking. I liked the idea behind the vibrational frequency planet and it was sort of odd to be watching an episode of Star Trek where two characters kissing actually meant something. And hey, getting to see an actual away team visiting a planet? They took their sweet time with it, but we got some decent location stuff out of the bargain. I was a fan. Overall though, a mixed bag. I couldn’t blame anyone for hating it but I was mostly just a bit disengaged.

Easter eggs and such:

You may have noticed a lot of the ships in Discovery are named after (human) astronauts and scientists, but this episode has an exception: one of the two ships the Vulcan admiral mentions to Lorca is called the Muroc. Sub-commander Muroc was a Vulcan officer seen in ENT 2×15: Cease Fire.

Burnham mentions that “The needs of the many” are greater than “the needs of the few”, which is a phrase famously associated with her adoptive-brother, Spock. He first said it in Star Trek II: The Wrath Of Khan. Apparently an old family motto (and/or Vulcan proverb).

The away team discuss General Order 1, sometimes known as the Prime Directive. Unfortunately the actual text of the Prime Directive is frequently confusing even to people who are supposed to have devoted their careers and lives to following it. For reference, General Order 1 is “No starship may interfere with the normal development of any alien life or society” and usually (but not exclusively) prohibits deliberately contacting pre-warp cultures who haven’t noticed that Star Trekking is happening up there.

DIS WTF: Stamets’ reasoning for not telling anyone that he’s going slowly crazy is pretty tenuous. I mean it’d be bad enough if the ship only relied on this guy to fix the engines, let alone BE the engines. I kind of hope Tilly goes straight to the boss with this one.

DIS LOL: “oh yeah this giant incongruous broadcasting antenna is probably a natural structure.” Seems like a bit of a stretch to me guys.

Time to meeting: Nothing. NOTHING. Tilly does seem to interrupt Stamets at lunch, but let’s face it, lunch isn’t a meeting. Unless it’s a lunch meeting, which absolutely should not exist.

Who’s That Face: It’s hard to do this section in an episode where the guest characters were clouds of blue CGI that only assumed an incredibly vague and temporary humanoid shape.

Mistakes and minutia: When Burnham shoots the hand phaser at Saru it fires Klingon disruptor-style blasts instead of honest, god-fearing Federation laser beams. That phaser is clearly an undercover operative and should be interred in the brig immediately, QED.