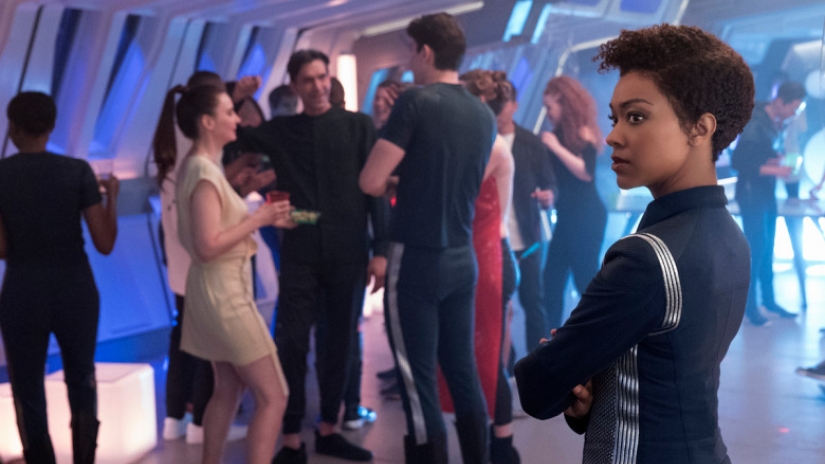 Star Trek: Discovery delivers its best episode yet in Magic To Make The Sanest Man Go Mad. Spoilers ahead in our review…

See related
The world of the Peaky Blinders

When, in his Iliad, Homer described love as “Magic to make the sanest man go mad” he probably didn’t think that the line would be used some 3000 years later to provide the title of the best episode of Star Trek: Discovery yet. Frankly, such limited thinking makes me wonder just how imaginative he really was. But whether he wants the honour or not, he’s got it, because this was Star Trek at its absolute prime vintage best. Move over TNG: Discovery has hit its stride and it’s coming for your space-crown.

One of the problems with the aggressive serialisation of TV is that the craft of writing an episode is often overlooked. The success of Star Trek was built off a tradition of weekly, stand-alone stories that is well out of favour right now, and it seemed like Discovery was doing its best to fit in with the crowd. Then we get this: an episode that’s so light on serialisation tropes that it can easily be watched stand-alone and retain all of its power and thematic genius.

Essentially, this episode is Edge Of Tomorrow meets Star Trek: Discovery, with its characters trapped in a short time-loop where they’ll die over and over again unless Stamets can find a way to convince his crewmates what’s happening and stop Harry Mudd. By appealing to Burnham’s confusion about her growing feelings towards Tyler – and vice versa – he manages to do it.

If you’re looking at sci-fi and thinking “yeah, whatever, we’ve seen time loops before” then fair enough, but the genius in this episode lies in the way that it’s is actually ABOUT something. Its layers have layers. That time loop isn’t just a time loop, it’s about routine, and regret, and what-ifs. The magic of the title isn’t just the time macguffin which gives Mudd the means to give things just one more go around – it’s also his lust for wealth that can’t be satisfied. This is an episode expertly woven around its themes and ideas in both plot and character terms, and it does all that while showing us the crew dancing to the Bee Gees. If you don’t love this episode then I’m sorry, you just don’t like good TV.

Honestly, I could praise it for days. Every scene seemed to have something fantastic. Stamets’ apology to Michael when she told him her secret. Tilly scanning the space-whale still in her club gear. All of Mudd’s one-liners. Anecdotes EVERYWHERE. I honestly can’t imagine it getting much better than this. And yet, every week it’s managed to improve. Roll on next week.

Of course, there are references:

Stella Mudd was previously seen in TOS 2×12: I, Mudd. Well, sort of. I won’t spoil it. She was played there by Kay Elliot.

Stamets met Culber in a café on Alpha Centauri. For obvious reasons this place turns up all the time in Star Trek. Zefram Cochrane went to live there. Leah Brahms lived there. And Stamets was hanging out there. Seems like it’s a real hotspot for Starfleet’s engine nerds.

I don’t think it’s necessarily canon, but Mudd’s space helmet has room for antennae which made me go “huh, is that an Andorian?” when he appeared. I think it’s supposed to be an Andorian helmet at least.

Star Trek’s original and now second-best time-loop episode was TNG 5×18: Cause And Effect. It’s the one with a Frasier cameo! (well, Kelsey Grammar, but let’s not kid ourselves.)

Tyler says Mudd once robbed a Betazoid bank. Betazed is, of course, the home planet of Deanna Troi, and all of the other Betazoids for that matter. And apparently they love banking almost as much as reading minds and using their empathic powers. Although they didn’t sense Mudd coming, did they?

DIS WTF: I mean if you’re REALLY reaching you might say “WTF how come Harry Mudd is basically wearing a device that can magically reverse time on his wrist!?” but also… who cares? Time travel in the Star Trek universe is so common that when Stamets simply explained the predicament to Burnham the first time I was a little surprised she didn’t just roll her eyes, instantly convinced, and say “oh great, not again.”

DIS LOL: Lots of good (planned) laughs in this episode, but I did smirk over Stamets saying he met Culver in Alpha Centauri. I mean, that seems like a pretty vague description. That’s a bit like telling someone “I went to a great restaurant in the southern hemisphere, you have to try it.”

Time to meeting: What is a party, if not a meeting with dancing? And also no chairs.

I’m probably going to have to drop this section, aren’t I?

Who’s That Face: Stella Mudd, aka Stella Grimes, is played by Katherine Barrell who you will recognise as Officer Haught from Wynonna Earp. Er, right?

Mistakes and minutia: This episode establishes the Bee Gees in Star Trek continuity, which let’s face it, brings with it a wealth of story opportunities. Look, they have their own page on Memory Alpha now: http://memory-alpha.wikia.com/wiki/Bee_Gees