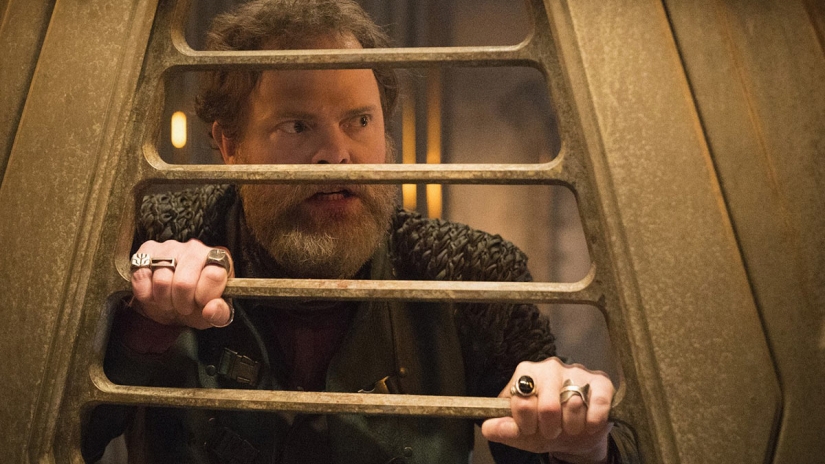 Harry Mudd makes an appearance in the latest Star Trek: Discovery episode. Spoilers ahead in our review…

A lot of reviews right now are calling this the weakest episode yet, and while it’s hard to disagree with that… well, if this is the worst we can expect, it’ll definitely have the best hit-rate of any Star Trek show thus far. Between the appearance of Harry Mudd, the explanation of Lorca’s backstory and Burnham getting a definitive win by setting the Tardigrade free, this was an episode that put a lot of smiles on my face.

I’m increasingly intrigued by Lorca, who seems to have formidable and calculating strategic mind, but also a total lack of empathy. You couldn’t pay me enough to serve under the captain who didn’t just abandon his crew – he actively KILLED them. I’d wonder how the hell he ended up with a new ship to captain, but at this point it does seem like the USS Discovery is a dumping ground for rejects, failures and radicals who can’t function in a normal command structure. So maybe this is the right place for him after all.

That said, this might be the first time in Star Trek history where I’ve agreed, broadly, with an Admiral over the Captain they’re telling off. If you needed any confirmation that Lorca’s a bad apple, that’s it.

Anyway, I’m glad to see Burnham’s tardigrade mini-arc wrap up with a happy ending, and three episodes seems about right for that. The plots are moving on at a good speed and I’m fairly hopeful we won’t get bogged down the same way Star Trek Enterprise did when it had an ongoing plotline. Frankly, I’ll never forgive that show for the time an episode ended with the crew saying “Plot a course for Azati Prime!” only for me to notice that the episode airing fourth after that one was called Azati Prime. Discovery might be taking its sweet time developing its characters, but at least it isn’t spinning its wheels.

And hey, speaking of characters, we got some good screentime for all of the regulars in this episode – Lorca obviously took the spotlight, but Stamets, Tilly and Saru all got fleshed out, just as I was starting to feel like we could do with seeing more of them. The only bad thing about this is that Burnham got saddled with a B-plot which de-emphasised her.

Still, that’s a small quibble. And Stamets injecting himself with space-DNA so he could pilot the spore drive might be terrible science, but it’s great science-fiction – a man so consumed by his inventions he literally wants to become it, and foreshadowed in the previous episode where he lamented his inability to communicate with the spores. You might not like this development, but you can’t argue that they failed to lay the groundwork for it.

That does lead us into the final image of the episode too: a mirror with an evil reflection. At first it might seem like Discovery’s gone all Twin Peaks on us, but the iconography of that scene – a dark reflection in a mirror – suggests that the promised trip to Star Trek’s fan-favourite Mirror Universe is all but guaranteed this side of Christmas. If Saru doesn’t have an evil goatee I’m going to be very upset.

Harry Mudd (and his various backstory references) are largely illuminated in his two TOS appearances, TOS 1×03: Mudd’s Women and TOS 2×12: I, Mudd, while there’s a further tale (of dubious canonicity) in TAS 1×10: Mudd’s Passion.

Mudd also delivers the iconic Star Trek line, “to boldly go where no one has gone before”, which is (canonically) part of Starfleet’s charter and was coined by Zefram Cochrane in a speech, a recording of which is played in ENT 1×01/1×02: Broken Bow.

A map of the front lines of the war references a huge number of locations that have cropped up elsewhere in Star Trek (I swear, they’re just taunting me at this point) though I got a particular nerdy thrill out of seeing Rura Penthe, the icy Klingon prison planet where Kirk and Bones go in Star Trek VI: The Undiscovered Country, aka the best Star Trek film (don’t @ me).

DSC WTF: Maybe I missed something, but as far as I’m aware we’re still no closer to figuring out what made everyone on the Glenn turn themselves inside out, and yet the Discovery is happily zapping themselves across the universe in the blink of an eye without so much as a moment’s concern that the might find themselves wearing their intestines on the outside of their stomachs.

DSC LOL: How long do you have to wait before you give away the unwanted junk bequeathed to you in someone else’s will? Because in Burnham’s case, it’s three weeks. That’s not to say that it isn’t a nice gesture, but it would’ve held some actual weight had we actually seen Burnham display any hint of attachment to the telescope Georgiou left her.

Time to meeting: 3:17, and finally, we get a glimpse of Discovery’s own meeting room. This is what we’re here for, people. Star Trek at its finest. Circular table, holographic powerpoint display, room for upwards of 3 people. This is a meeting room that truly says “contrary to expectations, space on this starship is not a problem.”

Who’s That Face: Harry Mudd is Rainn Wilson! Who was Lahnk in Galaxy Quest, of all things! And apparently played someone in The Office! He makes a GREAT Mudd here, though, camping it up beautifully. He almost shouldn’t work in the considerably less arch context of Star Trek: Discovery, but somehow, he really does.

Mistakes and minutia: This is the first time Star Trek has included the word “fuck”. And it did it TWICE in quick succession. That’s what I call making a statement. Although let’s be fair, it’s not like swearing doesn’t exist in the future, it’s just that Star Trek has broadly stayed away from it. Although part of me doesn’t care, because I’m a grown up, I do feel a little bad for all the kids whose parents might not let them watch Star Trek because of bad language, because I loved the show as a kid and there’s no way I’d have been able to watch it if they were dropping F-ton torpedoes all over the place.