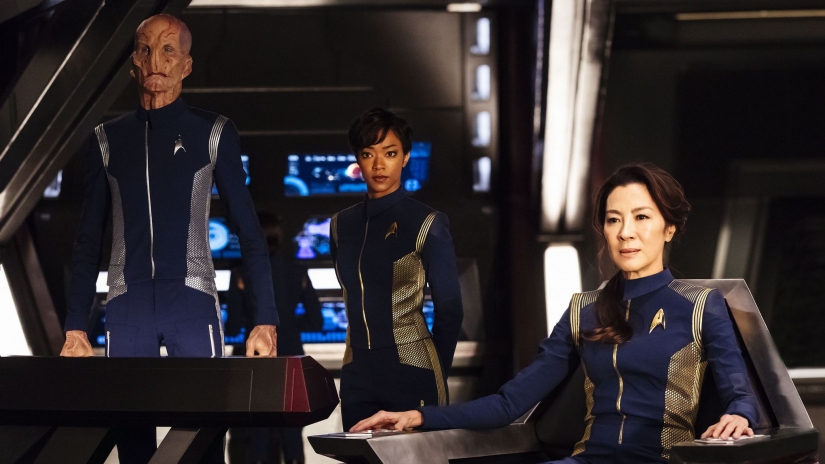 Exciting! Star Trek: Discovery gets off to an enjoyable, satisfying start. Here's our spoilery review and geeky spots from episode 1…

With almost no advance press for Star Trek: Discovery‘s airing and a whole heap of suspicious-looking production reshuffles and slippages, you could be forgiven for feeling trepidation about whether it was going to be any good or not. The happy news is that the opening episode, The Vulcan Hello, is exactly what it needed to be: a decent episode of Star Trek.

Indeed, it’s comfortably the best opening episode since TNG’s Encounter At Farpoint. Surprisingly lean on characters, but dense with plot, the story sees Michael Burnham, aka Number One, encountering a strange artifact in space leading her, her captain and her crew into a tense stand-off with more Klingons than they can shake a phase cannon at.

The feel of the show is surprisingly close to the Trek series of the 90s, but with obvious nods to more serialised storytelling. There are some great moments – I particularly loved the way Michael’s wonder, and genuine admiration for the probe was quickly subverted by the reveal that it was a Klingon device, and no less genuine for it – but that made the reveal all the more devastating. I thought it was a brilliant idea.

Likewise, the character dynamic was quickly and efficiently established. Saru, Captain Georgiou and Michael aren’t an exact lift of the Spock/Kirk/Bones dynamic, but their interactions are instantly as familiar and as well-defined. Clearly the work has been put into developing them.

That said, something grim hangs over this episode, and that’s the fact that we’re not actually on the Discovery yet. We’re on the Shenzhou. And since this isn’t called Star Trek: Shenzhou, there’s clearly something very bad about to happen to the ship and its crew, and (I suspect) the one character Michael has any real emotional attachment to who isn’t credited as part of the main cast: Captain Georgiou. With full awareness that most people will have watched episodes 1 and 2 together, I predict bad things for her.

Of course, some of that might be of her own making, because man, does she not like Klingons. I’m not sure if she genuinely expected her plan to succeed because knocking out your captain and risking an interstellar war isn’t exactly the stuff mavericks get justified credit for. It’s the sort of thing that gets you arrested and/or fired even if you succeed. Having seen that Michael was on the cusp of a promotion at the start of the episode, I want to see how that pans out following this one…

The only thing that made me a little uneasy was the use of Voq, the white Klingon who becomes the torchbearer. I was watching it a little uncertain about why that seemed off, but a friend pointed out that albinism – which we should remember is a real condition that actual people suffer from – tends to be over-applied to villains in pop-culture, and I think it’s a fair criticism of this episode to say that it seems ready to lean into that trope.

Other than that, the only potential bad thing you could say is that all of the set pieces in this movie are, broadly, things we’ve seen before. I fully understand why a new Star Trek TV series might be saying ‘let’s get away from the fairly jeopardy-free ship vs ship action that characterised a lot of the previous TV series’, but the way they did that seemed to be to reprise sequences from the Abrams movies. Which was fun, considering these were done on a TV budget, but if you wanted to complain about it being slightly unoriginal, you’d be justified.

Generally, though, this was an enjoyable start. It satisfied me, and I’m notoriously down on everything. I barely have time to talk about everything I was into – the design, the sound, the mixture of light philosophy and character work, almost everything that was done with the Klingons… I could go on. I’ll probably get to it eventually. But first: some geeky spots. And as you’d expect for Star Trek, it’s not exactly light on them. Let’s see:

Sarek, in case you’re new to canon, is Spock’s father. He was first introduced in Star Trek: TOS 2×10: Journey To Babel. Despite living well into the 24th century, he hadn’t previously spoken about having an adopted human child. But then, he didn’t speak about not having one either, so y’know. This is essentially the “Not touching, can’t get mad!” approach to continuity. Interestingly, the Vulcan Learning Pods Michael is shown using are a design first seen in the Abramsverse, so clearly this show isn’t going to be too precious about continuity details.

T’Kuvma mentions Kahless, aka Kahless the Unforgettable. He was the first Klingon emperor and the first to unite the Klingon people, though at this point in Klingon history it’s debatable whether he’s a myth or not. The Star Trek: TNG episode, Rightful Heir (6×23), tells the story of Kahless in greater detail. Indeed, the star system this episode mostly takes place in – Boreth – is, in the future, the setting of that very episode, where a planet within it is shown to be the site of a Klingon monastery.

Sarek explains that first contact between the Vulcans and Klingons took place in the H’atoria system, which is mentioned in the TNG Finale as the site of a small Klingon colony which, in the future timeline, Worf has become governor.

And, finally, the Klingon Death Howl, seen in this episode, was first established in the TNG episode Heart Of Glory (1×20).

DSC WTF: Saru claims that his species has been bred to detect death, which strikes me as a pretty metaphysical evolutionary trait to have. Although it probably explains why he seems so joyless.

DSC LOL: If your goal is to avoid violating the Prime Directive, maybe don’t visibly bring water to a drought-stricken civilisation then leave behind a giant Federation-shaped calling card that can only be seen from space.

Time to meeting: 0:00. The episode OPENS in a meeting. Sure, it’s a Klingon meeting, but that’s good enough for me. Star Trek is back, baby!

Who’s That Face: It’s Michelle Yeoh! From Police Story 3: Super Cop! Playing Captain Georgiou, a character who will definitely not be dead by the end of episode 2.

Mistakes and minutiae: I’m interested in what the word “Bedrock” is taken to mean if you can blow it open only for water to come spewing out at high pressure. Admittedly I’m no geologist, but that line struck me as a little bit “this man needs 50ccs of medicine, stat!”

Aaaand that’s it for episode 1. Exciting!