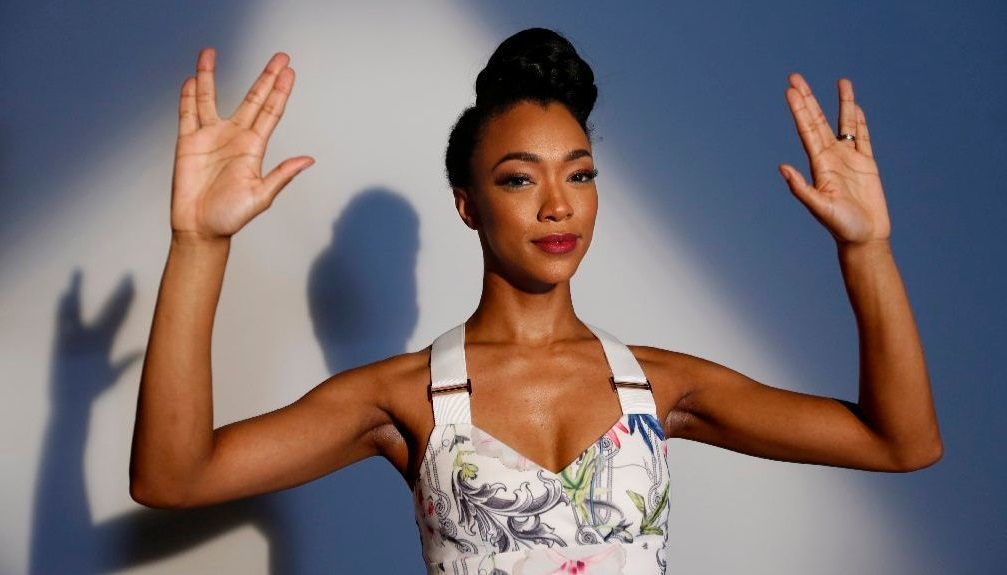 As the first black female lead of a Star Trek series and the first to not sit in the captain’s chair, Sonequa Martin-Green is breaking new ground in the franchise with her character Michael Burnham. We sat down with the actress to talk about the show, her role and how she approaches the dual sides of the character.

You’re the first protagonist in Star Trek to not be a captain, how was that pitched to you?

I had a pretty good understanding of that. What I knew about Michael Burnham being the first officer and not the captain was that they were pursuing different and unique paths for the story. Because we had always seen the captain, we had always seen every world of Star Trek from the eyes of the captain, so something that Bryan Fuller and Alex Kurtzman wanted to do was to define a new Star Trek with a new identity.

There were all kinds of things they put into place to help establish that, and one of them was having the lead be the first officer. What I really love about it is that it becomes a story of ascension and a story of that upward mobility that a lot of us can relate to. And you see someone who is unfinished and so you can then jump into the story with them and grow with them.

Do you envision a future for the series in which Michael becomes captain?

I definitely think that’s in the future, and that’s part of the journey for sure. We’re certainly not closed off to it, but who knows when. It’s certainly a part of it because that journey to captain has been driving Michael from the very beginning, and definitely since joining Starfleet. That progression and that yearning to ascend is almost a pillar in her personality.

Is it fun to play, that kind of unabashed ambition?

Definitely, I love that, it’s exactly what it is. It is very fun to play because as Michael Burnham, being her, it’s a very conflicting identity. There’s an identity crisis at the very root of it all and to be someone who is constantly striving and constantly climbing and scraping, it’s challenging and it creates a lot of wounds. It can be quite damaging and it has been for me as Michael because it’s been in a not-so-conducive environment, at least on Vulcan. So it’s challenging and fulfilling in the all the right ways.

How do you play that duality of her upbringing? I’ve noticed a lot of physicality in your performance…

I think it’s all part of it, all of it’s involved and intertwined – it’s not one thing. It’s really trying to maintain a multi-focus, and understanding that there are certain things that need to be accepted and there are certain things that need to be explored. So the duality, as you said, is this juxtaposition between humanity and vulcan logic. Part of being able to see it on the outside is having it be very real and true and specific on the inside. One thing is that erect spine, and that’s definitely something that was ingrained in Michael growing up on Vulcan and something that can be attributed to Starfleet as well. That militaristic uprightness. That was something that I knew needed to be there because it’s part of the story and part of the truth. So for me it’s just about seeking the truth as best I can. Did you get any inspiration from Leonard Nimoy’s performance as Spock?

I wouldn’t say that I got inspiration for Michael from Leonard, although Leonard is brilliant and I absolutely love him. He’s one of the main reasons why TOS is my favourite series. What I did learn from him is Spock – I learned a lot about who my surrogate brother is and from that was able to rewind and develop this understanding of him as a boy, as a preteen and a teenager. All those years that I was living with him. I certainly pulled inspiration in that way, but not in who I am as Michael, because he is in his very DNA half-human and half-vulcan, so he and I had a completely different experience.

Is there a story behind the name?

Oh yes, I love being able to talk about this because I think it’s wildly interesting. There’s a tri-part answer to that question because, at the very genesis of it Bryan Fuller makes this stylistic choice of giving his female leads male names. That’s something that he likes to do, so when he and Alex Kurtzman were developing the show they, along with the rest of the writing staff – including our now current showrunners – decided to keep up with that.

Aaron [Harberts] also speaks about parallels with the archangel Michael, and then once it filtered down to me, I realised that I needed to incorporate it into my life. I got really incredible feedback from the producers when I decided that I was named after my biological father. What I love about that is that, in the future, there is such gender fluidity that a girl can be named after her dad and perhaps a son named after his mother. So I love how it turns into this beautiful, poignant yet very quiet political statement.

Did the changes in showrunner early on affect you at all?

It affected me in the sense that I knew it was happening and I knew it was a decision that everyone felt was best, so I had to support it. I was surprised. I had a great time with Bryan Fuller before we got started – he was my first introduction into this world. He and I had a sit-down and I was quite inspired by his vision. So when he left, like I said I knew it was what everyone decided was best so I had to trust that, I really loved that we were continuing on with his vision. That was very important to Aaron and Gretchen [J. Berg]. So we just banded together and said ‘the show must go on, this is our blueprint and we’re going to keep going’.

One of my favorite things about the show so far is the friendship with Tilly – female friendships like that are still quite rare on television, was that refreshing to play?

With Tilly and I, what I really like is that these two women are both on the outskirts. When we first meet Tilly, she isn’t allowed a roommate, she seems to have this social awkwardness, and they see one another in themselves. I appreciate how much they’ve taken to each other. A big moment that happened for me with Michael, where I really understood her and recognised her was when Tilly says she’s going to be captain one day. I see that same unabashed ambition that I have and I that was one of the first keys that linked us together. Mary Wiseman is brilliant – I described her before as a firework – she’s absolutely gorgeous inside and out, on-screen and off, so I really appreciate that dynamic we have. Star Trek is one of the fandoms know for its purists; how have you responded to some of the backlash to a change in tone and structure?

By and large the reaction has been overwhelmingly positive, and we definitely appreciate that because we wanted to make this iteration of Star Trek uphold the legacy while establishing its own identity. We wanted to make those people who carry it so near and dear to their hearts proud, but we also wanted to make this something that anyone could grab ahold of, even if you haven’t seen anything in the canon.

We understand those purist fans, as you call them, where they’re coming from and, I for one, certainly appreciate that these people are highly intelligent and highly passionate. The reason why they have such strong views is because of their passion and because they engage. That’s we want more than anything, the engagement. We love it, and we love the positive reaction. We love the opinions, we love it all.

Did you have a relationship with the franchise before you were cast?

It was on the television when I was growing up. I remember seeing reruns of TOS, and some Next Generation and Deep Space Nine, so I had a peripheral understanding of it. I had seen the most recent JJ Abrams movies and, once I got the role, I decided I was going to see everything. I got as far as I could before I had to start working on my current story. I still say that I’ll see everything, we’ll see how long it takes me.

Sonequa Martin-Green, thank you very much!

(Additional thanks to James Hunt)