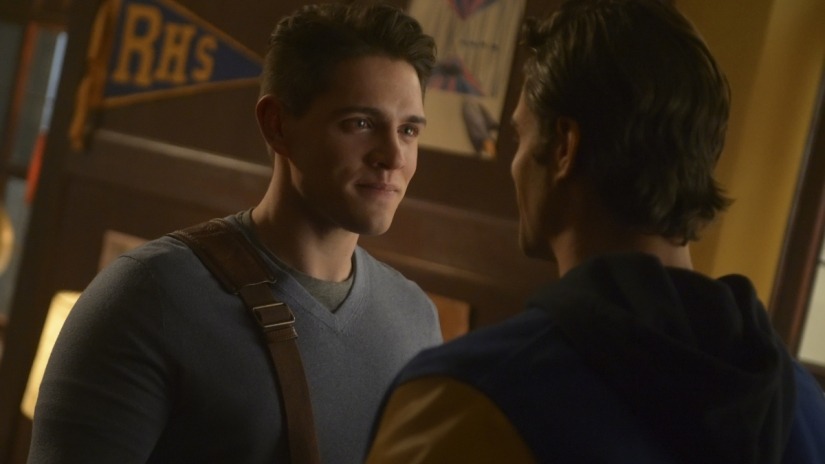 Both silly and frustrating, this expermential episode has Riverdale's secondary characters taking centre stage. Spoilers ahead…

“Riverdale is like Bizarrotown, where murder, mystery, and candy drugs aren’t the exception, they’re the norm…”

Thus begins tonight’s narrative experiment in which Riverdale does its best impression of a What If? comic by illustrating what the series would be like if the secondary characters were its focus instead of Archie, Betty, Jughead, and Veronica.

Well sort of. The problem is that the show so frequently sidelines its supporting characters – as well as ostenible lead K.J. Apa – that it is difficult to not think of this particular instalment as anything more than an opportunity to give its underused actors and actresses a time to shine. And to be clear, there’s nothing wrong with that as more Kevin and Josie is always a welcome thing. But throughout this episode, I found myself wondering if the original intention was to create a flavourful character piece like The Simpsons‘ heralded 22 Short Stories About Springfield. If such was the case, then Bizarrodale missed the mark like a Cheryl-fired arrow gone uncharacteristically off-target.

Speaking of the red-headed chaos-causer, are viewers really meant to think of her as anything other than a lead? Having been reviewing Riverdale since its premiere, I definitely see her as a far more essential character than, say, Archie. And Veronica gets a lot of screen time this week too, so what gives? To really carry out on its intended premise, we should have seen ciphers like Pop Tate, Waldo Weatherbee, and Evelyn Evernever front and centre in a piece that could have been part Rosencratz And Guildenstern Are Dead/part Mazes & Monsters.

These frustrating conceptual nitpicks aside – which, like all criticisms of this show, can now be brushed aside by quoting Veronica’s new mantra of “forget it Jughead, it’s Riverdale” – there was a welcome amount of character development to be found here. First and foremost is Kevin. Three seasons in and we know little more about Kevin than the fact that he is popular and gay. The show has dabbled in his storyline before, with his quickly aborted Joaquin romance and a regrettable subplot about him cruising Fox Forest for sex, but Kevin hasn’t been afforded the opportunity to feel really three-dimensional before. So it’s fantastic that we get to see Casey Cott shine by showing the heartache and complicated emotions that Kevin’s relationship with a closeted Moose stir up.

Riverdale‘s gonna Riverdale though, so the couple’s consummation of their relationship is immediately besmirched by the Gargoyle King, who, this week anyway, is Moose’s deeply closeted father. Major Mason had a crush on Tom Keller during his youth and was subsequently sent off to the Sisters of Quiet Mercy for conversion therapy that resulted in years of denying who he truly was, feelings that came back to the surface in this episode. For a show that is such an ally to the LGBTQ community, having a gay villain like Major Keller show up this week treads disquietly into Buffalo Bob/Silence Of The Lambs territory. And while the Bury Your Gays tropes fortunately doesn’t rear its unwelcome head, Moose being ushered off to Glendale at episode’s end is disappointing.

Tonight the show missed a huge opportunity to use its popularity to tell a realistic gay love story between Kevin and Moose, one that would balance the other LBGT relationship on the show (the increasingly cartoonish Cheryl and Toni) nicely. Granted this is a show that tends to only deal with real world issues on a surface level in order to focus on things like, bless ’em, maple syrup blood feuds, but again, this is the third season. Would it break the show to bring some reality into the proceedings? I actually think that it just might. But as a member of the LGBT community myself, it is disappointing to see yet another love interest for a gay character getting tossed aside.

Over the course of its 47 episodes to date, the series’ characters have done a lot of stupid things. Reggie deciding to rob his dad’s dealership is easily in the top five. Veronica, Riverdale‘s most inconsistent character, is happy to go along with this idea. Playing Bonnie to Reggie’s Clyde even after poo-pooing the idea. Reggie must rival Archie in the intelligence department, as he brings along his own car, clearly bought at the very dealership he is knocking off, as his getaway vehicle. Yet the dimness of this sequence and its lead in to the reveal that the Lodge’s big foe is none other than Gladys Jones (a scenery-devouring Gina Gershon) was a delight, and wonderfully Riverdaleian.

Then there’s Cheryl. Oh Cheryl. Yes, she is the show’s Queen Bee who is expected to be as outrageous as possible. First she outs Moose without any concern for the impact that could have on his life, then she blackmails her mother into actions that will deny opportunity for schooling to many merely because she feels entitlement and demands her privilege be recognised. While Toni rightfully blasts her on the former, she has no problem overlooking the latter because she will be able to attend Highsmith College with her beloved.

Finally, Josie didn’t get into Julliard, and now Archie is all about singing again. Huh? The news that Ashleigh Murray will be part of the Katy Keene cast is encouraging as the Josie character might finally get some development. As for Archie himself? Forget it readers, it’s Riverdale.