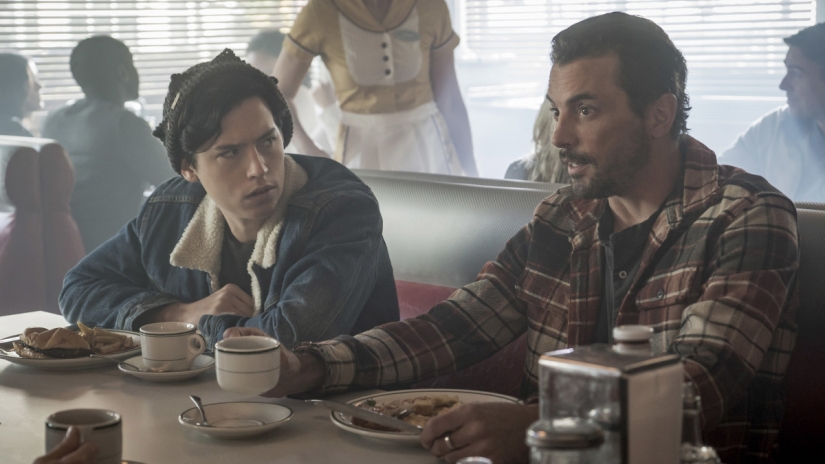 F.P. gets out of jail and Betty takes a walk on the wild side in an uneven outing of Riverdale. Spoilers ahead…

As it has been well established by this point,  this is a show where the improbable has become ordinary, and the sensible rarely exists at all. Like its spiritual precursor Twin Peaks, Riverdale will do whatever the hell it wants, and viewers can either hop aboard like Betty on the back of uneasy rider Jughead’s motorcycle or tune out entirely. Obviously, we here at Den of Geek are all in, but that doesn’t mean to say that the journey is always going to be a comfortable one. Which brings us to tonight’s instalment, perhaps the most uneven episode to date.

In previous reviews, I’ve trotted out the old adage that Riverdale wants to have its cake and eat it too. Indeed, this is perhaps the only cliche that the series has wholeheartedly embraced instead of upending expectations as has become its norm over the past 21 episodes. One minute we have a character criticizing the male gaze mere minutes before the camera lingers on another key player – a teenager in the show’s universe – stripping down for an impromptu pole dance during a downbeat performance of a Tears for Fears cover. I mean, as far as gloriously unhinged camp TV moments of 2017 go, this is a top fiver. But what message are the writers delivering here? That sometimes it is okay to overtly sexualise the show’s characters if it furthers the plot (the potential argument being made that this routine is the latest step forward in the ‘evolution’ of the Dark Betty storyline)? And where does Archie, who was going for a Most Times Shirtless in One Episode special achievement Emmy fit into all of this?

Again, it’s best to not let these sorts of thoughts linger otherwise the, er, mad world tapestry of Riverdale will completely unravel. The show regularly features some of the best-written female characters on television, so the two steps forward one leap back approach to feminism on display tonight is disappointing.

All that said, yeah, that sequence was so bonkers that it’s hard not to be impressed by the series’ goofball audacity. But there I go, having and eating my cake. See what Riverdale does? It’s insidious.

There were several plots running concurrently tonight: F.P.’s release from prison and welcome home/retirement party, Archie saying he loves Veronica and her inability to return the sentiment, and their subsequent investigation of the Black Hood’s relationship to the mysterious murder house where the Riverdale Ripper claimed his victims. Let’s tackle these from most interesting to least, shall we?

F.P. is released from Riverdale’s Shankshaw Prison (really guys?) due to overcrowding…or was Penny Peabody to thank/blame? Regardless, he’s out on the streets, going straight and choosing life. But at his retirement party, FP flips the script by announcing that he’s a Serpent to stay. Why? Because he found out about how Jughead got bitten by the Snake Charmer, despite F.P.’s pleas. (Can we just talk about how good Skeet Ulrich is tonight? The subtle way he says, “You broke my heart Jughead,” is a fantastically naturalistic bit of acting).

So just when F.P. thought he was out, they pull him back in. But what will his role with the Serpents, as well as the whole organisation itself, be like now that they are filling in the Jingly Jangly void left wide open by the Ghoulies? And why do Jughead’s feelings about the Serpents seem to fluctuate on a weekly basis? Time will tell. Maybe?

Meanwhile, Archie has been spending a lot of sexytime with Veronica, and he decides to blurt out that he loves her after a romantic interlude in the Lodge’s living room. Veronica isn’t, to paraphrase Positive K, trying to hear that, so she attempts to avoid confronting the issue directly with him, turning to her parents for advice. Ever helpful, her folks – reeling from recieving a letter from the Black Hood saying that he is watching them – respond to her romantic woes with the dopey statement that “We wouldn’t mind seeing more of Archie, he’s brawny and devoted to you.” Daww.

So with Bughead prepping for F.P.’s party, Veronica and Archie begin researching the house where the Riverdale Reaper killed its victims and discover that, dum dum dummmm, Mr. Svenson was a member of the slain family who escaped… and he subsequently enlisted the help of some townspeople to exact bloody revenge against the killer. Alas though, Svenson is not the Black Hood, and Riverdale High’s janitor can return to his daily duties of getting screamed at by Cheryl Blossom for interrupting her while she creeps up on Josie.

But there’s still the issue of whether Veronica loves Archie left dangling in the air like Clifford Blossom. This results in the most (un?)intentionally hilarious line of the night, one which also pretty much sums up Riverdale perfectly: “Can we not talk about Svenson, not about the murder house, just about us?” Archie pleads to Ronnie. After she realises that she finds it kind of funny and kind of sad that the dreams in which she’s dying are the best she’s ever had, Ronnie runs off stage. Her and Archie are splitsville until she can figure things out. Ever the player though, Archie suddenly realises at the episode’s end that, oh hey, Betty is kinda great. And like that, the series is the closest it has ever gotten to its comic book inspiration by having Archie in a love triangle with B and V.

As for Bughead, it seems that Jughead can’t be a Serpent and Betty’s boyfriend at the same time, so he’s chosen the Serpents in order to protect her. One clumsy “Snakes and Ladders” analogy later, and Betty is making googly eyes at Archie. Roll credits. This is getting good.

Next week: Christmas comes to Riverdale, answering my longheld question of exactly when in the year this show is taking place in the progress.

Read Chris’ review of the previous episode, Tales From The Darkside, here.