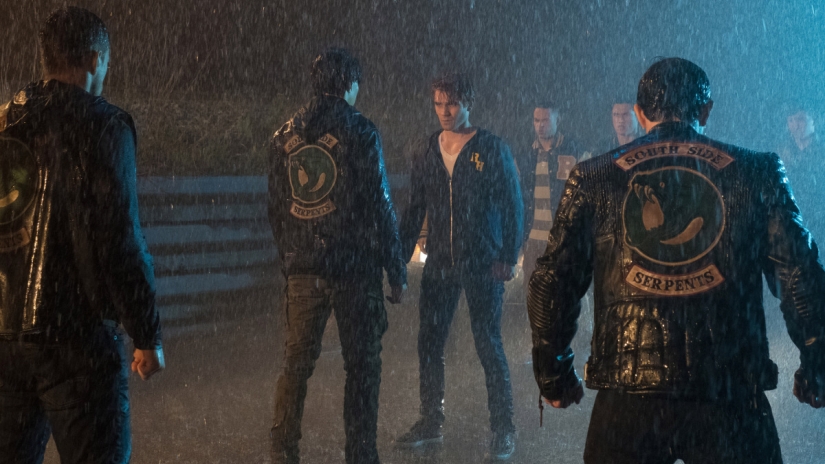 In which Betty is befriended by the Black Hood, Archie loses his damn ginger mind, and Civil War breaks out in Riverdale…

2.4 The Town That Dreaded Sundown

At the end of tonight’s exhilarating episode, Jughead grimly states that “Riverdale would no longer be the town with pep, from now on it would be the town that dreaded sundown.” It’s a completely melodramatic moment, one that beautifully illustrates how, early in its second season, the series is unafraid to double down on its inherent ridiculousness. It would be far easier for Riverdale to play its world of pixie stick-drug addicts, anachronistic gangs, and nonsensical musical performances with a nod and a wink. But the fact that everything is played so earnestly makes it work so much better than if the angst-angst-angsty lines were delivered with the actors’ tongues firmly in their cheeks.

As I’ve stated in previous reviews, the biggest issue with the first season was how Archie was too-often a non-entity when the action should revolve around him. This problem has been resolved and then some in the first four instalments we’ve seen since the series resumed last month. Thanks to uniformly excellent writing and the absolutely sincere performance of KJ Apa, Archie is now truly alive on screen. Here we see him at the most haunted he has ever been. Still traumatised by his father’s shooting and his inability to stop it, Archie is spiralling downwards. His formation of the Red Circle is threatening his relationship with Veronica – even though, as she eventually discovers, her dad is responsible for manipulating Archie’s “simplicity” (HAW HAW) into starting the newbie vigilante group – and it may get him kicked out of Riverdale High. By the time the credits rolled tonight, his actions have initiated a civil war between the North and South sides of Riverdale. Perhaps even worse still, because those tensions were equally stoked by Alice Cooper over at the Town Hall, he made Veronica retrieve a gun and his confession of wanting to straight-up kill the Hood show that he is deeply unhinged. He seems more grounded by the episode’s end, but given the turmoil surrounding him we will see if Dark Archie rears his ugly head soon.

Tonight’s episode belongs to Betty though, Lili Reinhart continues to deliver a deeply affecting performance in every scene. Tonight we learn that the Black Hood was so impressed by her speech at the Riverdale Jubilee at the end of last season that he decided to cleanse the town of its sin. (Travis Bickle, eat your heart out). Despite being crippled by fear and even guilt about this, Betty once again proves herself to be the series’ best character by taking action and enlisting Jughead’s help to crack the cipher left by the Hood and prevent a tragedy at the town meeting. Her mission was a success… or was it? The episode’s final scene ends with a huge cliffhanger when the Black Hood calls Betty. Exactly what he wants remains to be seen, but you know it isn’t going to be good.

Meanwhile, we have to discuss the problem with Hiram and Hermione Lodge. Their subplot was once again responsible for the episode’s most tedious scenes. I actually like these characters, but their plotting seems so nefarious and on the nose – “I told you Fred was going to be a problem” snips Hermione at the town hall – that I can only hope the writers are going to throw us a curve with these two and have them be more than just the season’s Big Bads pulling the strings of everything bad happening in Riverdale. For now though I have faith that this wheel-spinning is going somewhere other than just leaving narrative skid marks.

Read Chris’ review of the previous episode, Watcher In The Woods, here. – Archie uses the name Wilbur Winkins on the fake ID he uses at the Army/Navy shop. This also just so happens to be the name of an MLJ comics character who made his debut in 1944 three months before Archie did, and in many ways the Wilbur comic served as a prototype for the Archie characters we know and love today.

– Elsewhere in Archie deep cuts, tonight we meet a Serpent named Fogarty, this is no doubt Fangs Fogarty – a character who was a bully in Bob Bolling’s Little Archie comics (from which the Southside Serpents also came).

– The award for the episode’s goofiest scene goes to the one where Archie is taking a victory lap through the halls of Riverdale High while imagining a weirdo dance remix of his Red Circle mission statement video playing in his head.

– VERONICA FIRES A GUN! Oh man did I cheer at this scene. Betty owned this episode, but Ronnie was a close second. And yes, it’s worth noting again that she mentioned Archie’s “simplicity.” Even in the show’s universe they seem to realise that Archie can be a dolt at time.

– Kevin mentions to Betty that Sheriff Keller (TV’s worst cop) told his mother that he was cruising for sex in the woods. I believe this is the first mention of her on the show, although she and Kevin’s siblings play a huge role in Dan Parent’s Kevin Keller comics.

– Speaking of Kevin, he gets this episode’s best line when he tells Toni that “Betty’s ponytail is iconic and beyond reproach.”

– The scene between Archie and Mr. Weatherbee is fantastic, because their relationship is such a crucial part of the comics. There even was the long-running Archie And Me book that was specifically created to detail their antagonistic friendship. Whenever Riverdale gives these supporting characters some screentime is a great tip of the hat to the fully realised Archieverse that has been established over the past 75 years.

– Toni mentions Robert Graysmith’s two books on the Zodiac Killer, Zodiac and Zodiac Unmasked. These inspired David Fincher’s Zodiac, a film which has already been paid homage to on Riverdale a few times this season.

– Kudos for the intercutting of the fight between the North and South siders and the verbal sparring between Alice Cooper and Fred Andrews at the town meeting.

– What’s the over/under on how long until those Red Circle shirts Veronica designed are for sale at Hot Topic?