Riverdale season 2 episode 3 review: The Watcher In The Woods 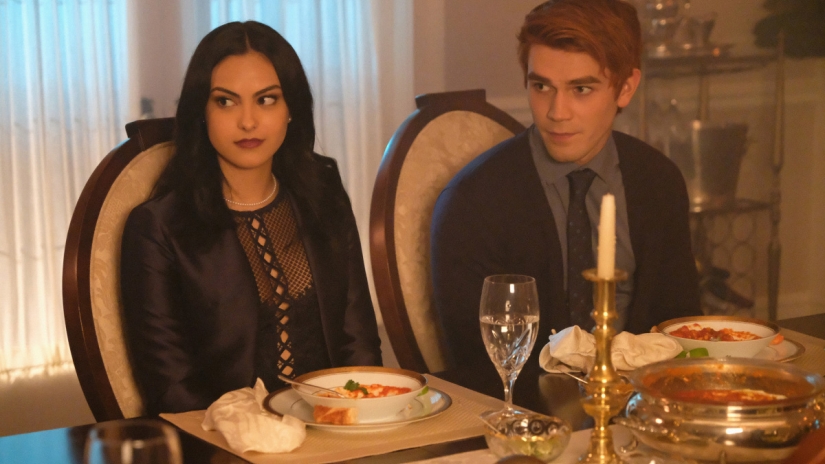 Archie forms a vigilante army! Jughead makes new friends! Betty gives the Gas Face! All this and more in an eventful Riverdale!

2.3 The Watcher In The Woods

Bottom line: This was an excellent episode that had character development aplenty and some genuinely unsettling moments.

Let’s get my only issue with the instalment out of the way up-front: I was not a fan of how quickly the attack on Moose and Midge was rolled back. Last week’s ending was shocking, and a call to arms that told viewers that anything could, and probably would, happen on this show. So for Moose and Midge to be as unscathed as they are given how dire things looked last week feels like a cop-out. We learn that Moose shielded Midge and took all of the bullets. Yet a short while later there he is, sitting up in bed, looking healthy and dispensing wisdom to Kevin and showing a new-found vulernability. (“Koose” shippers, your day has come). By contrast, Fred’s shooting was way less severe and he still seems utterly shellshocked. Maybe I’m expecting too much from the show, but the contrivance of having Moose and Midge physically unharmed by a point-blank shooting leaves a taste in my mouth more sour than a three-week old milkshake at Pop’s.

That said. Everything else. Yes.

“Every fairytale comes with the same warning: Good children should never go into the woods alone,” narrates Jughead as we see Kevin’s attempts to hook up thwarted by a screaming, bloody Midge. Between this and his discovery of Jason’s body while out fooling around with Moose last season, this kid does not have good luck cruising at all. (Also, regarding Jughead’s seemingly omnipotent narration, it is important to note that the theory that this shit is all in his mind is gaining some serious traction).

“I was just late-night jogging, you know, as one does,” Kevin hilariously lies to his friends while discussing how he stumbled upon Midge. Betty isn’t buying it however, and immediately throws more shade than that recent solar eclipse:

She confronts him about his risky behaviour in the woods and he swears it’s a thing of the past. At least until three or four scenes from now.

As for Riverdale’s resident loner, Jughead has his first day at Southside High. He’s greeted by Toni Topaz (Vanessa Morgan), friendly photographer and fellow Southside Serpent. Of course, Jughead says he will never join the Serpents when she suggests that he sit with them at lunch, and in under twenty minutes we have our second lie that will come back to haunt one of our leads before the end titles roll. It is worth mentioning that Toni and Jughead have immediate chemistry together, so Bughead fans have a new thing to fear this week.

Poor Veronica. All she wants to do is watch what Jughead succinctly calls a “gross reality dating show.” During a pow wow with her pals in Riverdale High’s Impractical Lounge she muses the following:”Guys, can we focus on what matters here? Midge and Moose are alive, Archie’s dad survived, the new season of The Bachelorette starts tonight.”

Two out of three ain’t bad we suppose. But before anyone can talk about rose giving or getting, Veronica shows her true motives for wanting her friends to hang out with her… she wants them to meet her dad. It seems like Hiram is still spending a lot of time in his study, just like he did in his old, ill-defined but doubtlessly bad white collar crime days. This doesn’t sit well with Veronica, who wants to give him the benefit of the doubt. Or prove once and for all that he’s a dick. Frankly, the back and forthing on where the Lodge women stand on Hiram in any given scene is giving me whiplash, but whatever. The point here is that Hiram has to prove himself to Ronnie, and a family dinner date with Archiekins is, in her opinion, as good a place to start as any. As for Hermione, she is overheard warning Veronica about Hiram, which results in a sternly worded warning from her husband.

Meanwhile, shaken by the attack on his dad, the murder of Ms. Grundy and the shooting of Midge and Moose, Archie decides to pay the gun he bought from Dilton a visit. There he stumbles upon an old comic book called Red Circle (more on that in our Riverdale Rundown) and decides to start a sort of neighbourhood watch called the Red Circle. He tells his schoolmates that it is most definitely not a vigilante group, nope, no sirree, but “an extra circle of protection,” and they are immediately on board. Even Mr. Weatherbee supports this watchdog group, telling a rightfully upset Sheriff Keller – TV’s most inept cop, so you know they are just going to shine a light on his inabilities – that the Red Circle is sanctioned by Riverdale High.

When the Black Hood sends his very Zodiac Killer-like message to Alice Cooper, it ends with the chilling intonation “I am the wolf, you are the flock, this is the bloodletting.” Immediately heeding the warning, Polly Cooper decides to get the hell out of dodge. “I’m an unwed mother carrying my cousin’s baby. I am the poster child for sin!” she declares to Betty. Who responds with her second shade-throwing moment of brilliance for the night, this one aimed at her ma.

Cheryl doesn’t get to do too much this week, but her observation about how Kevin seeks sex in the woods with strangers because inside he still sees himself as the “lonely awkward fat boy with Acne” rings truer than perhaps Betty would like to realise. Later in the episode, Kevin voices this telling her that her romantic yearnings to speak to a his experiences as a gay adolescent in a weird small town like Riverdale. Following an imagined dark encounter with the Riverdale Zodiac, he has a heart-to-heart with his dad. But, despite her best intentions, it seems like Betty’s interference in Kevin’s life has fractured their friendship. Temporarily at least.

During a weirdly tense dinner that is lit like every movie ever on the Hallmark Channel, Mr. Lodge calls Archie into his private study, the same one Veronica can never go in even though there is a portrait of her hanging up in there – burn! Possessing a sense of meta-awareness that he is the worst character on this show, he launches into a tirade to Archie about how he can no longer sneak into his daughter’s bedroom. That bit of father being protective of his daughter stuff out of the way, he then encourages Archie to have Red Circle be a bit more proactive (i.e. get all Death Wish on the Black Hood). Marvellous.

Following getting beaten up by the Serpents’ rival gang, the Ghoulies (which I think is a refrence to The Groovie Ghoulies, which was a spin-off from the Sabrina The Teenage Witch cartoon), Jughead realises that he does need their protection after all, and takes his place at their table. So much for the perks of being a wallflower.

The episode ends with Archie taking Mr. Lodge’s advice to have his Red Circle group go on the offensive to heart. Surrounded by his fellow classmates – most of whom are shirtless we guess in some kind of backhanded tribute to Archie for being able to keep his clothes on for the entirety of this episode – Archie declares to the Black Hood that his budding Guardian Angels outfit “will find you, we will hunt you, and we will end you.” All of this is much to the apparent interest of Mr. Lodge, who is one moustache twirl away from revealing himself as this season’s true big bad. Can’t wait to see what next week holds! – New character Toni Topaz shares a voracious appetite with Jughead in the comics. We will see how much, if any, trouble she causes for Betty. But Betty, watch your back.

– The road that Archie has Reggie turn on to in an attempt to save Ethel is called Hastings Road. Bob Hastings played Archie in the long-running radio show. – Red Circle was the name of Archie’s superhero imprint in the 1970s, and versions of a few of their characters can be glimpsed on the cover of the comic he is holding, which is basically just a stand in for the real-world comic The Mighty Crusaders.

– Best exchange of the night? Between Mr. Lodge and Archie:

“Have you ever had rum?” – It’s a great touch that someone gave Moose a stuffed moose. His quick recovery was still lame though.