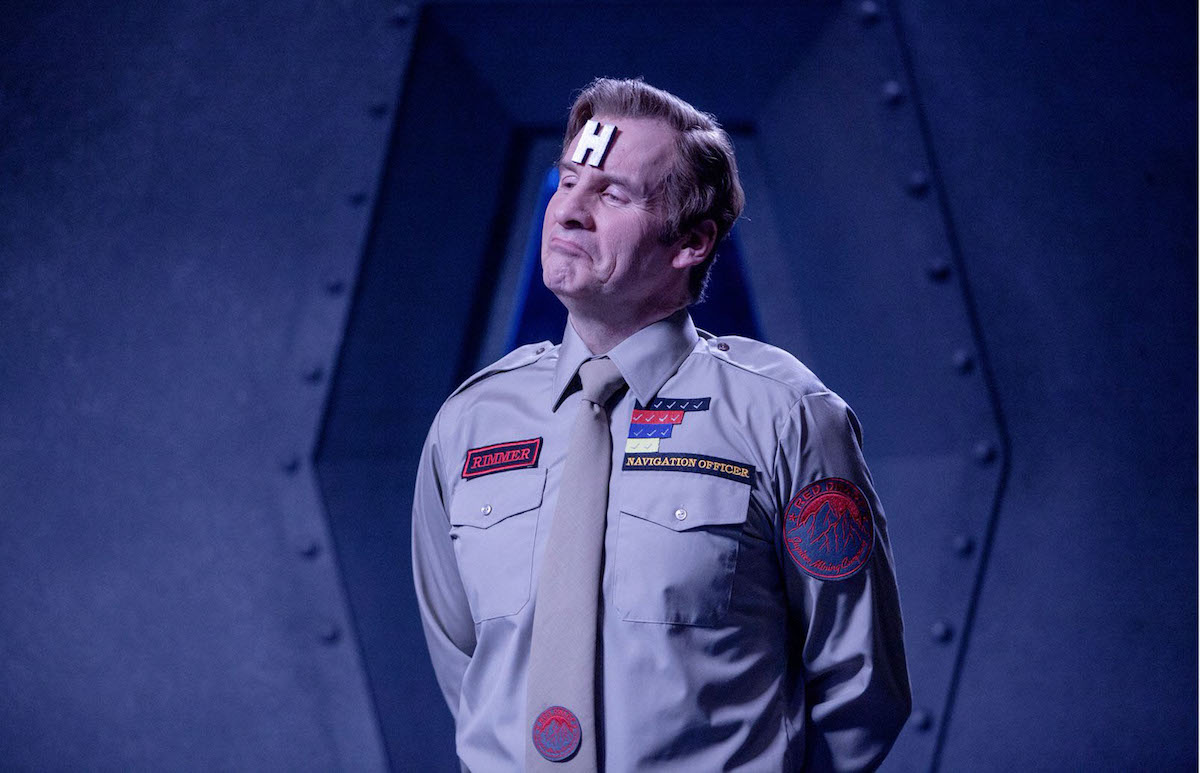 This review contains spoilers. Don’t read on if you haven’t seen episode 6, which is available now on UK TV Play.

See related
Doctor Who Christmas special scene to air during Children In Need
Doctor Who: Moffat on budget issues, advice for Chibnall
Doctor Who: Jodie Whittaker talks more about her casting

The future of Red Dwarf remains open, but unconfirmed. Short of UK TV announcing a Day Of The Doctor style special to go out in the next twelve months, it looks like Skipper is as the closest thing we’ll get to a 30th anniversary special from Doug Naylor and the gang. If that’s the case, it fills those boots rather spectacularly, while simultaneously playing as fast and loose with continuity as it always has.

As with most episodes in this series, the finale is structured around the ad break, so it’s a tale of two halves. The Dwarfers start to suddenly find themselves in situations they don’t want to be in, as a result of an anomaly (sorry, “weird thing”) in the space-time continuum (sorry again.) It turns out Kryten’s science project, a quantum skipper that would allow the user to hop between alternate realities, has caused the trouble. While the others opt out of testing the device, it’s Rimmer who takes the first journey, aiming to find a reality in which he’s “not such a big loser.”

Frankly, the first half is much funnier than the second, and it’s where the cast really shines. As a result of the anomaly, the crew are experiencing the effects of paths not taken in their own universe and making short skips through time and space to those outcomes. The show has addressed the many worlds theory before, but here, Naylor uses it for some superb sci-fi slapstick.

The Cat’s total inability to manoeuvre this sort of opposite mentality never stops being funny, and the episode really milks it for all it’s worth. It’s even funnier when Lister gets a bit smug about it and then accidentally wolfs down a second breakfast by making the exact same mistake. We’ve seen a renewed focus on ship-bound character comedy in the last two episodes, but the first half of the episode marries the situation with that comedy better than any other instalment of XII.

And then when Rimmer takes off, right before the ads, you-know-who turns up. If you’ve somehow managed to avoid finding out that Norman Lovett was returning in this series, you’ll have had the same reaction as the studio audience does to seeing Holly, in glorious flat-screen vision for the first time ever. You couldn’t say that it’s like he’s never been away, but his quips about computer senility and remount of the famous “everybody’s dead” exchange are only the tip of the nostalgic iceberg.

We also get a previously unannounced cameo from Mac McDonald as Captain Hollister, in a reality where he tries to desert Red Dwarf right as the lethal radiation leak threatens everybody on board. Then, as Rimmer channel-hops further on, the episode revisits some familiar old sets, plays some familiar incidental music and even dusts off some of the classic model shots of the ship’s exterior. It forms a full-throated shout out to the show’s earliest years and a geeky-spotter’s delight.

On the other hand, if you’re really invested in the show’s knotty continuity, the stuff that’s meant to entertain you might also drive you bananas. Ignoring how the captain’s remarks about Rimmer and Lister have fluctuated every time they’ve come up since Series I’s Waiting For God, it remains that alternate realities should be small potatoes to the boys from the Dwarf by now, but there’s little mention of previous dimension jumps in this one.

We could definitely nitpick more in this line, but the episode is still funny enough to get away with a lot, and it’s better for not letting continuity get in the way. There’s no need for a cameo by Ace Rimmer or Duane Dibbley to back up Chris Barrie’s flabbergasting range of reactions, not when it can have the wonderfully bizarre visit to a reality in which Lister is Rimmer’s posh space chum (Craig Charles doing his best Michael Winner impression there) and Cat is… um, Rat.

That last bit may be the absolute silliest thing the show has ever done, and I found it hilarious because they had the bloody cheek to do it with a mascot costume. Surely it must be John-Jules in that get-up, slapping a gong with his rubber tail and threatening to eat or sleep with whatever the heck he wants. Your mileage may vary, but it’s testament to how well the episode does that it takes such a strange diversion in its stride. It’s only a shame that the episode never finds as much for Robert Llewellyn to do as Kryten, though there’s a lovely gag in which he reflects upon how far he’s come from being a bogbot.

It’s not the funniest or the cleverest episode of the series, but if there’s a point or purpose to its nostalgia trip, it comes as Navigation Officer Rimmer, settled with a wife and four boys and respected by the whole crew, opts to leave his almost-perfect reality forever. Why? Because here, Lister is the captain of Red Dwarf. This pettyness and poisonous resentment may be an inevitable conclusion, but the episode really earns the long walk for a short drink of water. The choice to return to that old grey bunk room underlines how that central dynamic between two men, with all of its bickering and failures, could probably keep generating stories for another 12 series.

Some of the commenters in this parish have noted that XII has leant a bit heavily on callbacks, relying on familiarity rather than breaking new ground, and on paper, this may seem like the culmination of that trend. It’s demonstrably true that Red Dwarf is not what it was in its heyday, (whenever you personally think that was) but you can’t say that any episode brazen enough to do Rat World is just retreading old ground.

Overall, Skipper is a funny and fan-pleasing series finale, at the end of a run that has had its highs and lows. It’s not in the upper tier that Mechocracy and M-Corp reached in previous weeks, but it’s a cracker nonetheless. Further series seem likely, even if they are yet to be confirmed by UK TV, but just in case, this leaves the show in remarkably rude health. Even when they look back to The End, there’s nothing so final about it.

To paraphrase a senile computer; appreciate what you’ve got, because basically, it’s fantastic.