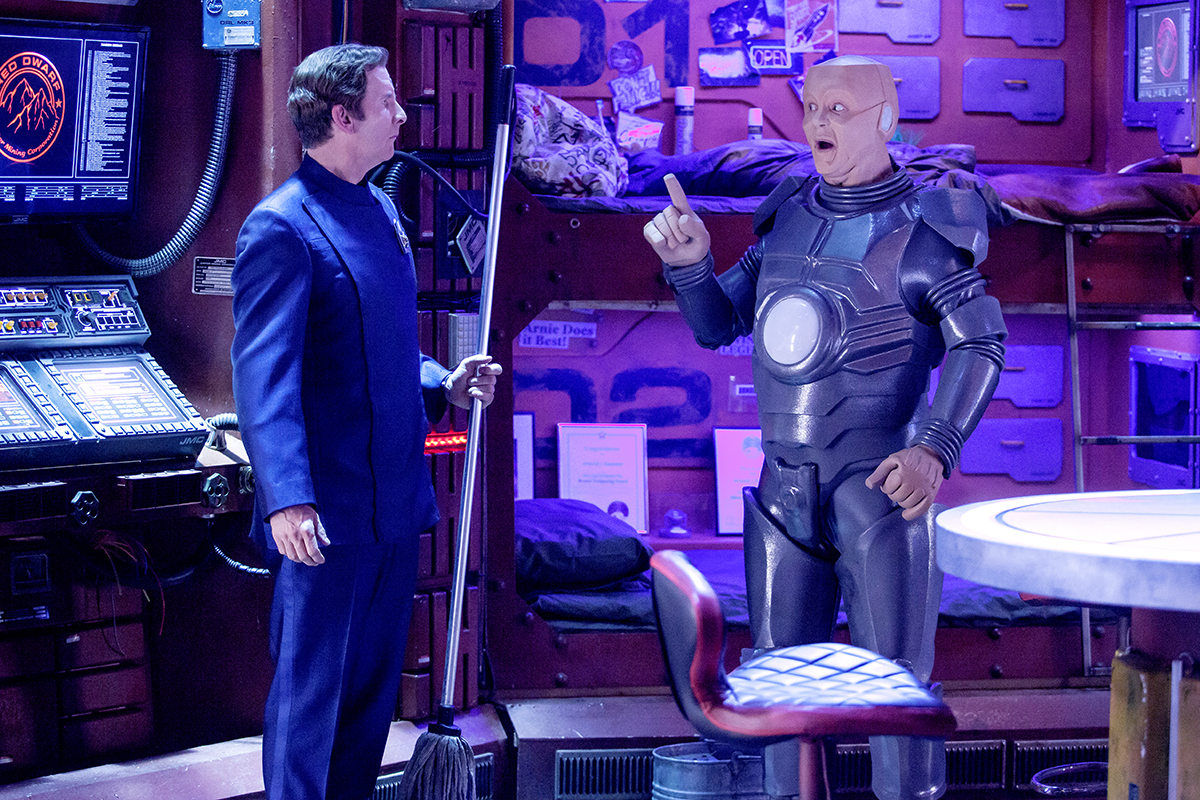 With Mechocracy, Red Dwarf XII delivers a contender for the first bonafide classic episode of the Dave era. Spoilers ahead in our review…

This review contains spoilers. Don’t read on if you haven’t seen episode 4, which is available now on UK TV Play.

“I’m Kryten 2X4B and I approve this message.”

Now, this is more like it. Whatever you thought of the first three episodes of Red Dwarf XII, you’re in for a real treat with the back half of the run. And what better way to start than with Mechocracy, a ship-bound character-driven satire which I think has a strong claim to being the first bonafide classic episode of the Dave era.

We’ve seen sentient dispensing machines in Series X’s Dear Dave, but this makes better use of the automatic population of Red Dwarf, who are mostly voiced by Daniel Barker once again. When Lister accidentally downloads an SOS virus into Red Dwarf’s CPU, the crew have to abandon ship before it’s pulled into a black hole.

In the process, the vending machines are brutally reminded that they are considered non-essential personnel, and when the crisis is averted, they strike for equal rights. The potential lack of food, oxygen, heat and the Cat’s Lovely Legs home waxing kit prompts the ship’s first general election for a machine representative, in which Rimmer and Kryten put themselves forward as candidates.

Cured, Siliconia and Timewave are all episodes with large guest casts and different locales, especially last week’s episode, which stretched the “last human, stranded in deep space” situation beyond reasonable definition. By confining the action to Red Dwarf, the show comes back to its core cast of characters. It’s not the first post-BBC episode to do this, but it’s the best.

Remember the self-destruct sequence at the beginning of Series III’s Bodyswap? Like that episode, Mechocracy is structured to introduce its big idea via an unrelated potential disaster for the crew, but gets a lot of laughs in the process just by having them interact. The result is often hilarious – there are more great one-liners and skits in the first half of this episode than in the first half of Series XI put together.

It starts with Kryten’s mechanoid development session, which shows how even the sight of Robert Llewellyn not doing anything for thirty seconds can be funny in the right context, and gets better from there. Rimmer’s glee at a Yellow Alert, the Renegade Monks exchange and Lister’s brief promotion to Technician 2.5 all feel like vintage Dwarf moments and they all come from character rather than a contrived situation. It’s what some of us have been longing for all season and it’s a very strong warm up for the plot to really get going after the ad break.

The resultant election is a farce that only these four smegheads could organise. Going up against Kryten and Lister is Rimmer and the Cat’s Lovely Fluffy Liberal Alliance, built on the former blackmailing the latter about reading glasses. This seems a bit arbitrary, but again, playing on the Cat’s vanity is a good character-based reason to put two characters who never usually work together on the same side, and the result is worth it.

Their strategy is simply to lie through their teeth – they seem poised to paint something ludicrous about a 350 million dollarpound windfall on the side of the small rouge one at a moment’s notice, with Chris Barrie on season-best form, doing a spectacular line in Cameron-esque pomp and reminding us all that he used to be on Spitting Image. But while the episode casts Rimmer as the baddy for lying, it’s not just one-sided Tory bashing.

Underscoring the good intentions of Kryten and Lister’s Independent Future Party is the fact that the whole election is a political solution to a logistical problem – there’s never any indication that Kryten knows how to evacuate the machines in the event of another emergency and equal rights might be a practically impossible goal. The episode argues that while one side knows they’re making promises they won’t keep, the other side is making promises they can’t keep.

Either way, politics is a messy business and the idea that neither candidate is suitable to represent the machines is what makes this such a fun electoral satire. This follows through with smear campaigns, using clips from classic episodes to drive home the point that Kryten is deranged and Rimmer is a smeghead, and the debate scene, where Rimmer pontificates about the point at which a document can be considered a file – before it’s saved or after it’s printed. It’s not subtle, but it is very funny.

And howdy-doodily doo, the whole farce is capped by Lister reluctantly making a last minute backroom deal with Talkie Toaster (once again voiced by David Ross!) in order to sway the vote their way. We know the drill with Talkie by now, but it’s still a surprise to see him back and I still laughed when he tricked Lister into asking “do you want any toast” first. They’ve held this return back, so I’ve left it this late in the review in the hope that anyone watching at broadcast pace manages to get to next Thursday without the surprise being spoiled.

Mechocracy is a terrific episode that has a real sense of rediscovery from beginning to end. This is Doug Naylor’s best script in years, giving each of the cast an opportunity to do what they do best as their respective characters, and getting enormous laughs out of a new spin on their usual petty power struggles. Toasted teacakes all round!