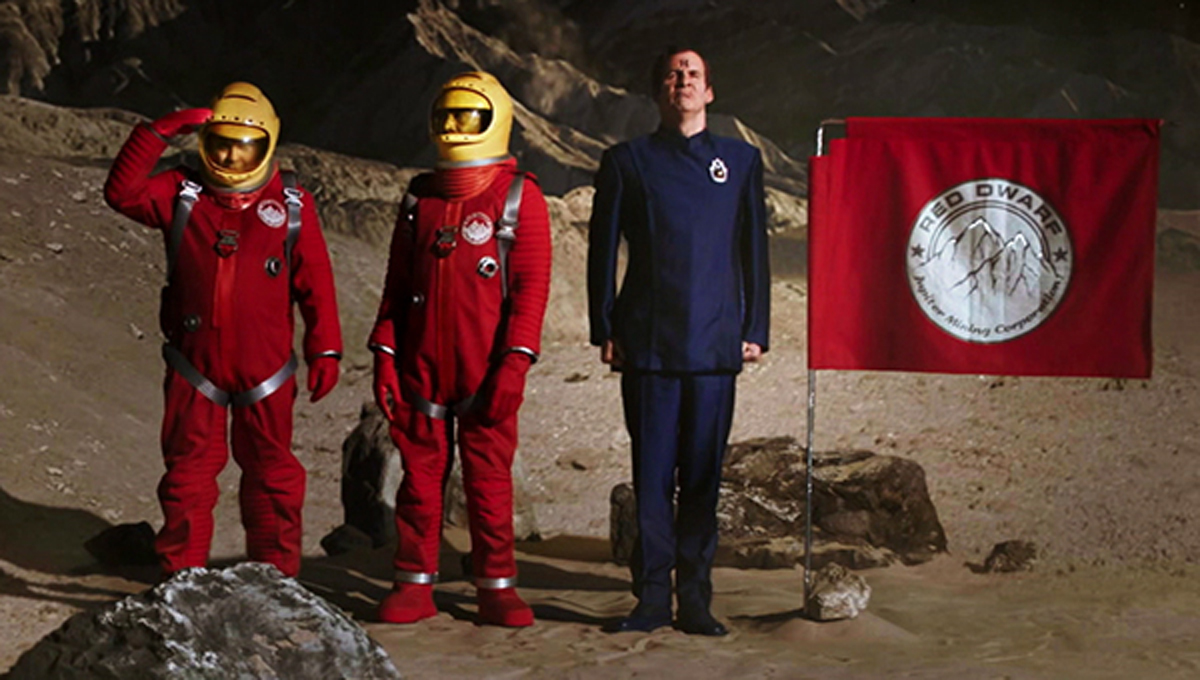 “Are you criticising me?”

This is awkward. If it weren’t for the fact that no one sets out to make bad TV, we’d almost think that Doug Naylor was going meta with this one. How rubbish can an episode that lampoons criticism possibly be?

Well, contrary to the dopamine release that reviewers supposedly get from slagging something off, (cheers, Kryts) it gives us no pleasure to say that Timewave is not up to the high standard that Red Dwarf XII has set in the last two weeks. In fact, we’d go so far as to say it’s the worst since the Dave era began with Back To Earth.

The episode starts strongly enough, as Rimmer leads an ego-driven expedition to a moon rich in helium-7, the most valuable gas in the universe, while Lister and the Cat cringe inside their Sanctuary Base spacesuits from Doctor Who – those suits really do get everywhere! But when a twenty-fourth century spacecraft called the Encomium temporally washes up close by the newly christened planet Rimmer, both it and Starbug are immediately endangered.

The Enconium is on a collision course with the moon, which would destroy it and anything in the vicinity because of its abundance of gas. The Dwarfers dock with the craft to discover the society on board has declared criticism illegal. They try to get the crew to correct their potentially disastrous course, but flouting the law is punishable by draining, a process of critical lobotomy that makes the offender just like the rest of the shamelessly eccentric populace.

It’s not a bad idea for an episode, but the execution falls far short of whatever potential there may be. What we get instead is a misjudged safe space satire that throws an awful lot of contrivance and deliberately garish production design after some truisms about the importance of taking criticism on board. It just lies there, with not much to say and a whole half hour in which to say it over and over again.

The repetition grates early on – the episode goes to unnecessary pains to remind us of how our heroes are constantly insulting one another, particularly in Cat’s time-honoured flippancy towards Rimmer being in jeopardy. That old chestnut gets rolled out about six times in the first five minutes and not one of the gags lands.

The strain continues as the titular timewave comes in, with Kryten explaining the ripples from an imploding black hole have displaced the Enconium in deep space. We’ve seen some of your comments on the last two reviews arguing that Red Dwarf is at its very best with a minimal guest cast, and Timewave backs up that point of view completely. The hoops that the episode has to jump through to introduce this society, in a show where the entire premise hinges on Lister being the last human alive, aren’t justified by the story we get out of it.

By the end, the brief mention of another timewave endangering Starbug has been completely forgotten – all we get out of this story is the characters on the Enconium, who are mostly annoying stereotypes. They’re deliberately irritating, but for the most part, they’re fatally unfunny too.

The episode aims to send up those who dish out criticism as well as those who can’t take it, but it winds up having nothing interesting to say. It’s a pub bore, smegging on and on with a tedious strawman argument about political correctness and school sports days and inclusivity and, tragically, having no actual point to make. The tasteless and spectacularly untimely one-liner about sexual harassment at the BBC is just the cherry on top.

It’s not completely bereft of laughs. Even if it’s not the best episode, it’s a real joy to see Johnny Vegas, apparently an avowed fan of the show, doing his level-best as the fastidious bobby who has to enforce the law in his ridiculous pink uniform. There’s also a really funny skit involving Broadchurch‘s Joe Sims as wild-eyed inmate Johnson, who has been sentenced to life in prison for tutting at a dinnerlady. Where hardly anything else about the conceit works, you feel like they could have saved it between them.

Finally, the episode manifests Rimmer’s inner critic, (Chris Barrie in Blofeld mode) in a turn vaguely reminiscent of the previous personality meddling episodes like Series III’s Polymorph, Series V’s Demons & Angels and even the Rimmerbeast from last year’s Officer Rimmer. It’s the best concept the episode has to offer, but it comes too late, and is defeated with the same flippant disregard as the rest of the episode.

It’s a really frustrating one, closest in quality to the weaker episodes of Series VII. You could get something really good out of this doomed ship metaphor, but there’s neither the comedy nor the plotting to back it up. It’s partly a victim of being produced in early 2016, because with everything that’s happened in politics in the last couple of years, you’re left imagining the episode that could have been, with the context of some giant wrong-headed decision that everyone was too afraid to criticise coming up in the news agenda every single day.

It’s a shame, but Timewave is a critical failure and one of the weakest episodes in the show’s history. Where some recent scripts have been so good that they could have been made in the show’s heyday, this feels dashed off, even though the pace is unusually slow this week. To end on a positive note, and a bit of a tease for next week’s superb episode, (engage smug mode) things get much better from here on out…