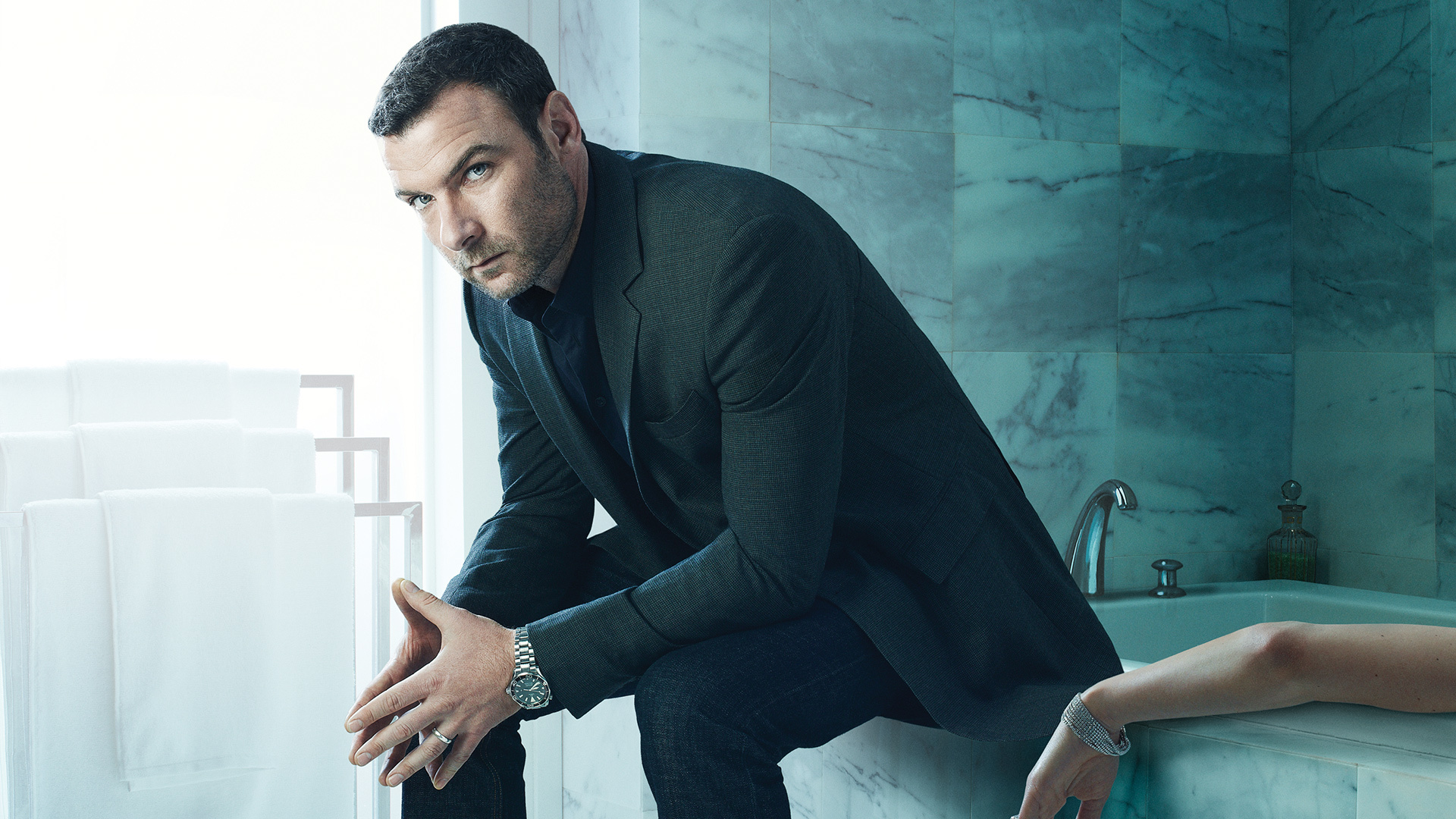 The fix is in. Here's why Hollywood crime drama Ray Donovan deserves a place among the hallowed TV greats…

Breaking Bad. The Sopranos. The Wire.

See related
The Sopranos: the greatest show ever made
26 new UK TV shows to look out for
Explaining The Sopranos' final scene

Three of the most popular and critically acclaimed serialised dramas. The Mount Rushmore of TV. Look up any list and you’ll see them there, digging their elbows in and jostling for position inside the top ten.

But if we’re going with the Mount Rushmore metaphor, there’s a blank space on the mountain and an argument for Ray Donovan to have his face carved into the rock, nestled between McNulty, Tony and Heisenberg.

Donovan’s the answer to Hollywood’s biggest problems: Heavyweight boxing champ has a dead girl in his bath tub? Call Ray. Pop megastar bribed with a sex tape leak? Call Ray. Action movie megastar about to be outed as gay? Who ya gonna call? Morally ambiguous, cringeingly current and utterly enthralling, Ray Donovan allows you access to Hollywood’s seedy underbelly: you’re through the looking glass, getting the inside scoops, on the QT and very hush hush.

Early criticisms of Liev Schreiber’s acting acumen were quickly bound, gagged and dumped in the trunk: Ray Donovan’s a different beast than Wolverine: Origins’ Sabretooth and anything but a scapegoat, a la Scream’s Cotton Weary. In Donovan, Schreiber is cool, calm and collected, he’s a man of few words and damn, he looks good in a suit. What’s that phrase? “Women want to be with him, men want to be him.” I’m not sure you could say that for the rest of Mt Rushmore. Although always in control, Ray has zero work-life balance. He goes missing for days, owns a second apartment downtown and isn’t adverse to a lil’ extra-marital activity. As the fixes start to involve Hollywood higher ups, the FBI and organised crime syndicates, each season sees Ray dragged deeper and deeper down until inevitably, his family fall into the firing line. And you don’t mess with the Donovans.

This is where one of Ray Donovan’s true strengths lie; it’s not all about the titular protagonist. There’s a wealth of well-written, considered characters who each evoke pathos, antipathy and endearment, often in equal measure. It’s a rarity to have a TV show that doesn’t contain characters with what the wrestling world calls ‘go away heat’: that is they are truly hated, as in “Get off my screen, I’m gonna fast forward you.” Think about Anthony Jnr in The Sopranos. See? Go away heat. There’s none of that here.

Instead, we get characters who split your allegiances with the chief culprit arguably being Mickey Donovan, the role Jon Voight was born to play. As Ray’s ageing father, Mickey is a crook, fresh out of a twenty year stretch: he’s a schemer, a charmer and a dreamer. The trouble is, the world’s changed while he’s been inside, his old school methods are outdated and he’ll result to using his family to get a little quick cash. This makes him the biggest danger to the Donovans and led to Ray shopping him in in the first place. In this show, there’s no greater joy than watching Mickey still keeping up with the kids when it comes to drink, drugs and debauchery, but nothing more heart-breaking than standing by as he endangers those he loves most with his half-baked heists. Such hits include robbing the casino he’s just been fired from with two stoned Native Americans and setting up a prostitution ring backed by the Armenian mob. What could go possibly wrong? Everything. And shouting it all at the telly won’t help. Usually dragged along for the ride is Bunchy, the youngest and recovering drink and drug dependent Donovan, delicately portrayed by Dash Mihok (Romeo + Juliet). Having been sexually abused by a Catholic priest after Mickey got sent down, Bunchy’s journey details him dealing with his demons. It’s soul-stirring stuff, sensitively handled and sometimes all too real: No more so than how his blossoming relationship with a single-mother breaks down when he gets her baby boy out of the bath. His past comes back to haunt him and the possibility of being accused of, or worse still, wanting to touch the child render the relationship and a normal life impossible. Bunchy’s innocence (or lack of) makes him a character to cheer for when he comes good, but to be bitterly disappointed by when he effs it all up. Which he does regularly.

This kind of reaction is felt all too often in Ray Donovan. The characters created by Ann Biderman (Public Enemies, Primal Fear) are as temperamental and prone to making mistakes as any one of us, whilst being so rich in colour that you’re tempted to forgive them their wrongs. As a case in point, by the time you discover that before taking care of the family, Ray himself was also abused as a boy, you’ve already seen him cheat on his wife, drive whilst drunk AF and kill in cold blood. So should you still feel sympathy for him? Maybe, maybe not. But whichever way you go, you’ll change your mind by the next ep.

The only character for whom sympathy never wanes is the oldest brother, Terry, although Eddie Marsan (The World’s End, Tyrannosaur) makes sure it’s rarely for the Parkinson’s disease that cost him his boxing career. Terry is desperate to keep his boxing gym legit but is constantly called on to bail out his younger brother or his old man, with the latter getting him banged up for a botched armed robbery. Whilst there, Terry becomes a target in the prison yard but loses his moral compass when he stoves an attacker’s head in with a free weight. The violence, as ever in Ray Donovan, is graphic but not sensationalised, gruesome but not gratuitous. So, it’s a perfect show then. Is that what we’re saying? Hmm…not quite. As Ray’s long-suffering wife, Abby (Paula Malcomson) does suffer the trappings of the typical TV wife (see Carmella and Skylar): driven to an affair by an absent husband and driven to despair by her spoilt, entitled kids. But Abby’s sass and street smarts (and only a slightly dodgy ‘Baawston’ accent) allow her to stand out.

And as for the pesky kids? They come and then they go. Bridget (Kerris Dorsey) has her boyfriends – including a rapper and a teacher – who give Ray some sleepless nights whilst Conar (Devon Bagby) thinks he’s a bad man gangster like his dad, but soon comes a cropper and thinks better of it. It’s usual TV kid stuff, but like actual kids themselves, they’re just about bearable. Alongside them, Mickey’s son, Black Irish (his words) Daryl (played by Pooch Hall) feels on the periphery, partly because of him being newly introduced to the family after his father’s playing around and partly because the Donovans are reluctant to get him involved in family business. Well, except for Mickey of course, he drags him into all sorts.

Whatever he does drag him into though, you won’t have to wait long to find out how Ray’s going to get him out of it. There are no extraneous character-centric episodes or tangential flashbacks to divert attention away from the narrative. Everything in Ray Donovan feels tight and vital whilst seasons end with a feeling approaching resolution, alongside the feeling that it could all unravel at any moment. Top notch.