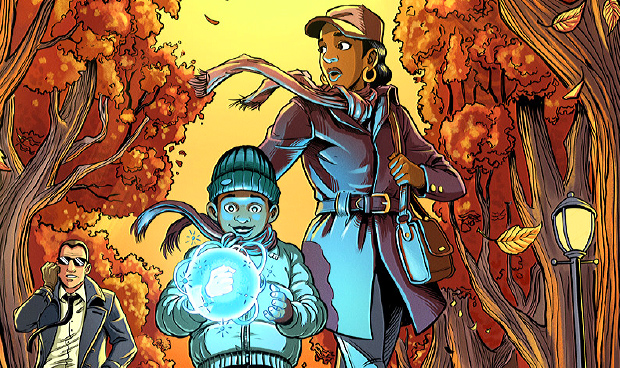 Netflix has given a series order to Raising Dion, a sci-fi story about woman raising a super-powered young son…

Another superhero series is joining Netflix’s original content lineup, however, this one won’t quite fit in with its existing Marvel small screen scene.

See related
How Ghost Rider & Agents Of SHIELD invigorated each other

Raising Dion, an independently-created superhero sci-fi story that carries a heartfelt family twist, has been given a full, 10-episode series order by the streaming giant.

The story stems from a 2015 short film and comic book of the same name, created by Dennis Liu. It depicts the innately unconventional parenting task of a widowed African-American woman, whose 7-year-old son Dion possesses an array of potent superpowers (telekinesis, energy projects, invisibility, etc.). Yet, despite its fantastical premise, the focus rests more on the realistic implications that one would have when raising a child who has a normal sense of wonder and mischief, but happens to possess incredibly dangerous abilities.

“I started this project many years ago because I wanted to see more diverse representation on film and television and I’m excited to partner with Netflix, who I know shares that commitment. More than ever, we need more stories told from different points of view and my hope with Raising Dion is to create a cinematic experience for all families that will lift your spirits and make you laugh and cry.”

Helping Liu in that endeavor with Raising Dion will be appointed showrunner Carol Barbee, who has also written the script for the first episode. Barbee, a veteran television writer/producer, has been attached to a wide variety of series, notably in the sci-fi/action arena, with Falling Skies, Touch, Hawaii Five-O and Jericho, as well as dramas such as UnREAL, Girlfriends’ Guide To Divorce and Judging Amy.

Intriguingly enough, also joining Barbee as an executive producer on Raising Dion will be actor Michael B. Jordan (Creed, Chronicle, Fantastic Four), who is on board via his Outlier Society Productions. Moreover, Jordan will also appear on the series on occasion, playing the late father of the titular super-powered-sprout, who (at least, in the original short) is implied to have been a military man who was cut down in action.

Regarding Michael B. Jordan’s presence on the series, Netflix VP of Original Content Cindy Holland states:

“We haven’t seen this type of superhero story before — an origin myth full of imagination, wonder and adventure, all grounded in the experiences of a modern single mother. Michael B. Jordan is an exciting and dynamic talent, and I’m excited to see him, Macro, Carol and the team translate Dennis’ unique vision to television.”

Raising Dion does stand as a potentially unique family-centric take on an increasingly crowded superhero/sci-fi genre, also carrying much of the same  X-Men-esque drama about society’s depicted fear of superpowered people; something that will undoubtedly be rooted in socially topical themes.

There’s no word yet on when Netflix expects Raising Dion to arrive.