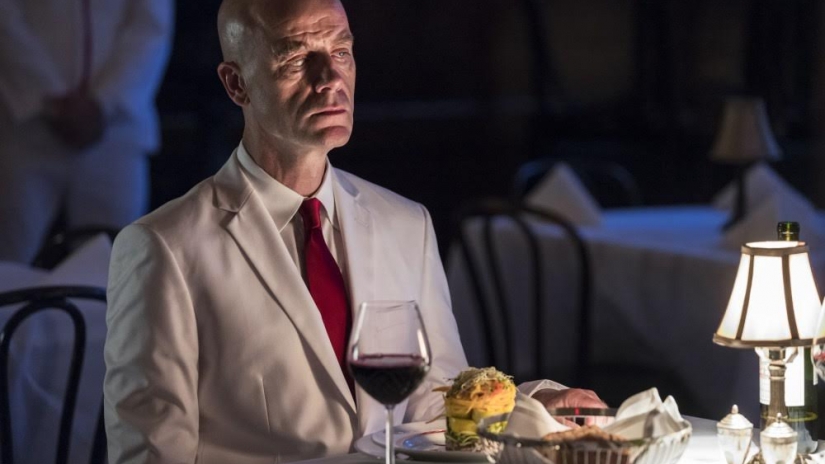 Preacher season 2 continues to handle action scenes and violence to great effect. Spoilers ahead in our review of Puzzle Piece…

There’s nothing quite so uncomfortable as tension within a group. When there are things unspoken between people, it’s unpleasant to be around. It’s like having a corrupted wound. Maybe if you leave it alone it will go away on its own, or maybe it’ll get infected and your nose will rot off your face. That’s always the risk when a foreign body gets under someone’s skin, and in the case of Preacher, everybody’s got their something.

Puzzle Piece is an episode with a central focus, but with multiple ways to approach said focus. For Starr, it’s a casual aside, while for Hoover and Featherstone, stopping Jesse Custer is a matter of life and death. For Jesse, the Grail’s attempts to stop him are tertiary to his “thing”, which is tracking down God. Tulip is still distraught over what happened with the Saint of Killers and is lashing out angrily at those around her, while Cassidy feels as though Jesse’s refusal to use his power to try to save Denis is something of a betrayal, forcing Cas to take matters into his own hands, as shown by Cas loudly thawing frozen blood on the oven with a knife and a pot.

Jesse, Cas, and Tulip are having problems even before white-suited goons kick Denis’ door in and go from room to room trying to hunt down and kill Custer and his friends. That The Grail pokes its nose in won’t help matters, but it does give the group a reason to pull together again and put their problems to one side after some brief awkwardness. When there’s real trouble afoot, Jesse, Cas, and Tulip tend to pull together, with a little help from a practically feral newborn vampire Denis.

One of the standout elements of Preacher‘s second season has been the way it’s used violence. There have been some great action scenes this season, and the one we see this week, a quasi-cinema verite trip through the apartment complex to Jesse’s door and into the apartment for the slaughter, is a good entry. It’s completely silent and shot from the POV of one of the random guards kicking in Jesse’s door. They’ve got hearing protection on, so that way there’s no way the voice can be used on them. Until, of course, Jesse pries the helmet off one while the others try to kill Cass on the kitchen floor.

It’s a nice looking sequence from director Michael Dowse, and it definitely feels like something out of a found footage horror movie, and not just because there’s a vampire attack. It’s a combination of the filter, the fact that violence can break out at any moment, and the completely and utter silence until the violence begins (after that, it’s silence and screaming over the radio). It’s a chaotic peak in the middle of the episode, giving way to Jesse’s growing paranoia. He’s certain that the men in white are coming after him, and he recruits a whole phalanx of police officers to keep an eye on him, in addition to Tulip and Cas.

Of course, because he’s prepared for it, nothing happens, which seems to be par for the course. Hurry up and wait. Get ready for something to happen and it doesn’t happen. The tension lingers, albeit in a different form.

Even the big reveal at the end of the episode, that Starr is going to take on the case of Jesse Custer personally, is more of a building-of-suspense moment than a blow-off. Jesse doesn’t know who Starr is, or what he’s capable of, but he’s as much an antagonist as the Saint, and almost as dangerous thanks to the incredible amount of resources at his disposal. After all, BRAD is an enemy that even the voice can’t stop, and it won’t take too long before Starr decides to flex his muscles again.

US Correspondent Ron Hogan, having seen Tulip since and put frozen blood bags on her bruises, will not be trying his hand at the Hurt Locker game of choice, despite being slightly obsessed with the Hurt Locker concept. Find more by Ron daily at PopFi.