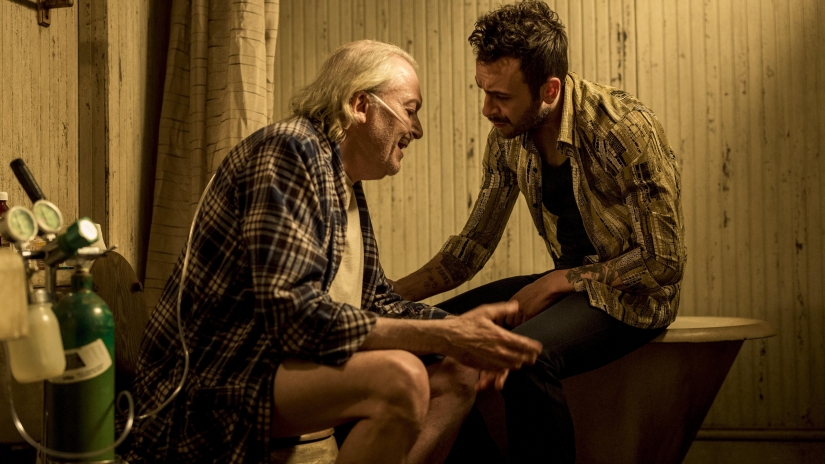 As Cassidy, Joseph Gilgun shoulders most of this Preacher season 2 episode's heavy lifting. Spoilers ahead in our review of Holes…

There was always something of a maudlin streak in the original Preacher comic book. Yes, lots of people were mutilated and killed and funny things happened, but at the same time Preacher is a book whose main focus is loss. Loss of faith, loss of family, loss of friends, loss of actual God… Preacher is as much about how characters deal with loss as it is about the characters themselves. Any power, no matter how mundane, requires certain sacrifices, and Cassidy the vampire is struggling with the responsible use of his power regarding his son Denis.

This episode belongs mostly to Joseph Gilgun, who has a pretty difficult task. He’s supposed to carry the episode (as much as anyone on an ensemble show can be expected to carry things). Cas is the fun guy who is fun to mask his pain, which is a very old cliché indeed. It’s difficult to keep that from being rote, and to make the character’s sadness feel organic when for the most part he’s been drinking and cracking jokes throughout the series. There have been little hints of darkness behind the smile, but it really shines through here.

Think about Cassidy for a moment. Yes, he won’t die a natural death. Yes, he can regrow missing limbs with only a couple of pints of blood at his disposal. But, as he says when talking to Tulip, it’s not all fun and games. He hasn’t been to the beach in ages (though technically he could go at night after dark) and he has to watch all his friends and family, like his son Denis, die in front of him. As Tulip said so succinctly, it sucks. The moments in which Cas spends time with his son, be it in the nursery or while helping him through his sickness, are very sweet. Denis’s desperation is a palpable thing; he’s terrified to die and it’s obvious despite the language barrier. Cassidy’s conflicts works well, because we’ve seen the character be empathetic to others; he’s had a good time, but the good time rarely seems to reach his eyes. He’s not a drunk or a druggie so much as he’s self-medicating an hundred years worth of pain. He sings sweetly to his newborn son, then takes a drink in the midst of the nursery because he knows that one day he’s going to watch that baby die a broken old man.

The cliffhanging final moment of the episode only further emphasises the ambivalence that Cas has about turning his son versus watching him die. Either way, Denis is going to have a much different life than the one he’d been leading, but whether that’s good or bad is kind of depending on the person. All three characters in Preacher have had a serious brush with death, and all three handle it in different ways. Jesse throws himself into his search for God, even following Cassidy’s advice about going to see some tech nerds about the video of “God’s” execution. Tulip alternates between not sleeping and going to the Hurt Locker (before throwing herself into apartment maintenance).

Mark Stevemann’s script puts the bulk of the dramatic weight on Cas, and he handles it well. Tulip’s meet-cute with Lara works well, and it will provide those two with a little additional complication down the line while making the Grail more of a direct threat. The little signs of the Grail’s omnipresence, from the commercial in the background while Jesse sits in the waiting room of the electronics store to the watermark on the disc itself, is a nice touch. The show is working on growing The Grail’s presence in the world slowly, and it seems to be paying off. The Grail is shaping up to be one of those organisations that is kind of well known, but that no one really knows just what it does, like Halliburton or the Rand Corporation.

There was nothing particularly revelatory about Preacher this week, and that’s okay. The show is creating a new antagonist, while advancing the story of Eugene’s time in hell. Jesse is getting observed and his quest is being noted; Eugene and Hitler might be coming up with a plan for Eugene to use to escape Hell. It’s a slower, more character-based episode, but it’s still satisfying to spend time with the characters and to get to know their universe a little bit better.

US Correspondent Ron Hogan is kind of intrigued by the idea of the Hurt Locker now. Apparently, if you’re Tulip, it’s a whole lot of fun to be shot at. Find more by Ron daily at PopFi.