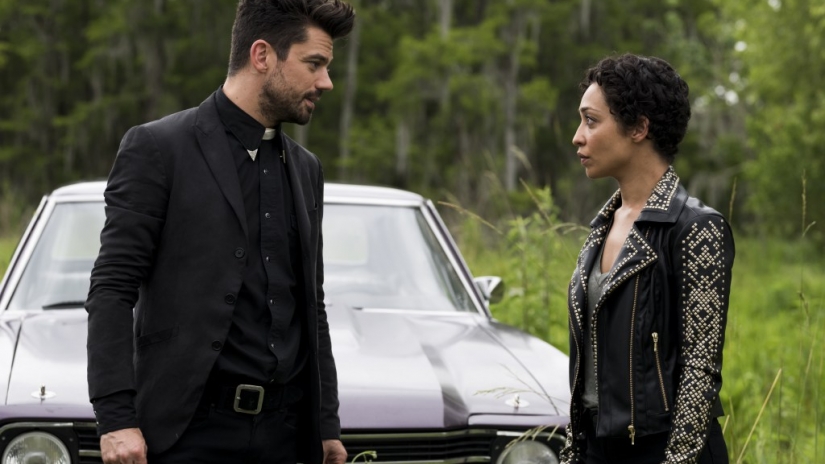 Despite being well-written, something about recent Preacher episodes has made them drag for our reviewer. Spoilers…

There seems to be a point in every season of a television show where I find my interest beginning to wander. It may not necessarily be the fault of the show, just a symptom of a wandering attention span. If a show is ten episodes, I’m usually fine; if a show stretches out to twelve or thirteen, somewhere near the middle or later in the order, I drift away. I’ve found myself drifting over the last couple of episodes of Preacher, and I’m not sure if it’s the show or just me. Either way, I drifted again this week.

Part of the problem, I think, is that Preacher has front-loaded most of the action sequences. The first couple of episodes were slam-bangers, and while there have been some solid sequences over the past few episodes, most of the attention’s been on the Grail’s efforts to separate Jesse from his friends, which don’t resonate quite as much with me. Cassidy is clearly kind of flighty by nature and more distracted with his son than with anything the Grail might do. Tulip’s been in and out of Jesse’s life over the years, so her leaving again isn’t quite as surprising or as ruinous to him as it might have been previously.

The episode’s biggest reveal, that the Saint of Killers has been loosed on the world again, should have a bigger punch than it does. Jesse and Tulip have an off-screen confrontation about his secret. He didn’t send the Saint to Hell, because the Saint now has a portion of Jesse’s soul (I assume he doesn’t tell her that part, because she doesn’t slap him upside the head for giving his soul to a murder machine), but that he’s got him imprisoned beneath the swamp in an armoured vehicle. It’s a larger version of the very same thing that Jesse went through when he was a boy, which is kind of fitting. It’s as if Jesse was so scarred by that punishment—turning him from a Custer to a L’Angelle—that it’s a fitting punishment for someone who belongs in Hell alongside Eugene and Hitler.

The technical aspects of the episode are solid. I enjoy the visuals of the foundry, particularly the Saint’s guns covered in molten metal but still being cool to the touch when cleaned off. The Grail’s continued manipulation of Jesse also works fairly well, as Starr has a good scene where he forces Jesse to listen back to his own childhood prayers until Jesse tells him in no uncertain terms where he can put the film. The fact that the Voice makes everyone do the literal action as commanded continues to be really amusing, particularly when it’s the stone-faced Starr attempting to stuff fists full of magnetic tape into his recently violated behind.

Director Norberto Barba does a good job with those visual elements. The shot of Hoover racing away from the Saint’s makeshift prison is really funny, as is the way Hoover goes to get the tarp almost immediately when called before Starr, and the willingness of Hoover and Featherstone to go along with Starr’s plan to escape death. I like that Jesse’s grandmother is shot in such a way to make her bigger than life, and those brief scenes in Angelville provide some very good visual stuff. I also like the way Featherstone plays Jenny. It’s convincing enough, but it’s just a little strange, too. Jenny feels off-kilter, like a performance piece ought to.

Preacher is well written (Sarah Goodman gets script credit) and it’s compellingly acted, but I’m not engaging with the overall plot right now. I’m not interested all that much in Jesse’s search for God, and I don’t find the Grail to be all that much of a threat when compared to the Saint. Maybe the Saint’s freedom will spice things up again, but given that Jesse can match him weapon for weapon, maybe not. Either way, I’ll be interested to see how the show handles Angelville when we go there next season.

US Correspondent Ron Hogan really misses Jackie Earle Haley on Preacher. Every show is better with him around. Find more by Ron daily at PopFi.